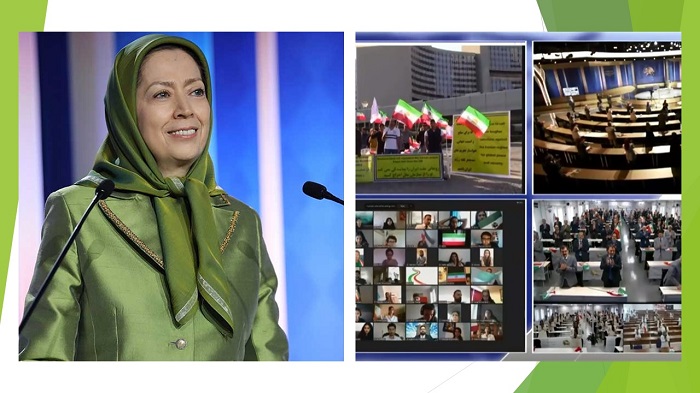 Maryam Rajavi has recently spoken at a virtual conference just before the UN General Assembly Summit. It was called the “Trans-Atlantic Summit on Iran Policy,” which was organized by the National Council of Resistance of Iran (NCRI) that comprises several opposition groups which are the leading voices for a democratic Iran as an alternative to the present regime.

#FREEDOM matters. The Iranian people deserve a democracy where women are treated as equals & freedom of speech is encouraged. It is time the WORLD takes note. I was honored to take part in Trans-Atlantic Summit on Iran Policy—hear my thoughts: https://t.co/c98kh4ZDJd @iran_policy

Maryam Rajavi outlines 3 pillars of an effective #Iran policy at the #FreeIran2020 Trans-Atlantic Summit
? Human rights for all the Iranian ppl
? Comprehensive sanctions against the religious dictatorship
? Recognizing the Iranian people’s resistance and struggle for freedom pic.twitter.com/rajlIHO77c

This bipartisan unity is unusual in US politics and shows it is possible to unite when necessary. Many of the arrays of speakers believed greater pressure needed to be exerted on the regime so as to safeguard the Iranian people’s basic rights. These demands come just after Navid Afkari’s execution which occurred just because he attended an anti-government protest two years ago.

Afkari’s charge was based on a false confession

Afkari was tortured to force him to confess to a crime he did not commit. In light of this evidence, organizations and governments from throughout the world had filed appeals with the Iranian government to release him from the execution. Instead, the regime used its media outlets to force people to believe that he deserved the death penalty. There have been continuous demands on the regime to reform its penalties of execution but this has been falling on deaf ears. Several speakers at Friday’s summit believed that the regime’s stubbornness gave an even more legitimate right for outsiders to protest their draconian policies while European supporters of the NCRI believe that appeasing Iran should come to an end.

Robert Joseph, who used to be the Undersecretary for Arms Control and International Security at the US State Department, has advised the US against hoping that the regime will reform on its own.

Amb. Robert Joseph
The Resistance Units are the true beacons of freedom. You’ve endured suffering at the hands of the regime for standing up for democracy and a secular republic. Your sacrifices and your success will inspire the next generation in #Iran.https://t.co/xuEvyww1Wl

Replacement by pro-democracy NCRI a possibility

Many of the meeting’s participants supported the suggestion that it is better to replace the regime with the ‘’pro-democracy NCRI.’’ British MP David Jones has openly tried to persuade the British government to join Washington is moving in the direction of helping Iranians to oust the regime. Maryam Rajavi fully supported the sentiment of David Jones when he said “by adopting a firm policy against the regime, the UK and the US and other Western democracies should align themselves with the people of Iran and Madam Rajavi for a viable Iranian made solution.”

Ambassador Robert Joseph, ex-US Arms Control chief: More negotiations will only lead to more brutality. The problem is the regime itself. We must deny the regime any legitimacy. we must support the democratic opposition.#FreeIran2020https://t.co/2U7Rt1f9LO

Robert Joseph said that because many American and European policymakers did not really believe there was any choice but to live with the regime, so they had continued appeasing rather than go to war.

Rudy Giuliani made the suggestion that the US administration should increase sanctions as that seems to be an effective way of dealing with the regime. Mrs. Rajavi said the November 2019 uprising helped to dismiss “all illusions about the stability of the clerical regime.” She also said in her address that “today, the regime is at its weakest point ever,” ……. “In such circumstances, giving assistance to the mullahs will only increase the pain and suffering of the people of Iran, but of course, would not be able to save the regime from its certain downfall.”

The speakers of the summit on Iran policy addressed the 1988 massacre of over 30,000 The People’s Mojahedin Organization of Iran (PMOI / MEK Iran), members, and other activities in 1988. They demanded justice and accountability to end the impunity of the mullahs’ regime, many of whom were responsible for the crimes of the massacre.