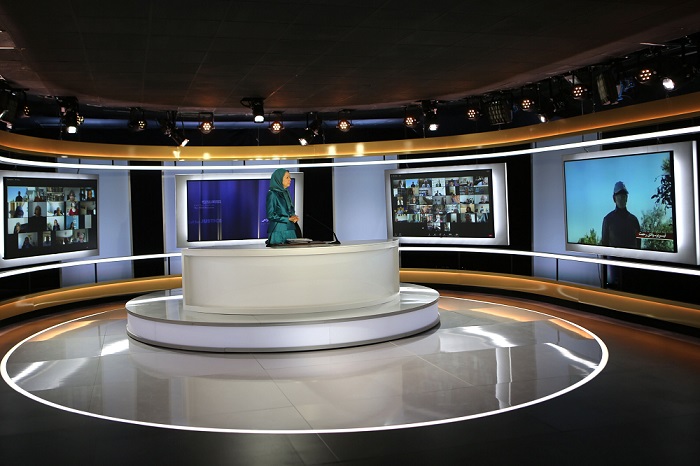 Systematic impunity reached its peak in June 2021 when the Iranian regime’s Supreme Leader Ali Khamenei selected Ebrahim Raisi as the new president. Raisi was a member of Tehran’s “Death Commissions,” responsible for killing thousands of political prisoners, mostly members and supporters of the People’s Mujahedin of Iran (PMOI / MEK Iran).

Mrs. Maryam Rajavi, the president-elect of the National Council of Resistance of Iran, was the keynote speaker at the conference. She said: “From the onset of the 1988 massacre, the Iranian Resistance provided information about the mass executions to the United Nations. Unfortunately, they chose to turn a blind eye to these crimes,”.

“Khomeini’s fatwa was an explicit decree to execute all the Mojahedin who remained steadfast… the goal of the regime goes far beyond the execution of several thousand; it is the obliteration of a generation, an ideology, and men and women who rejected religious extremism under the guise of Islam and stood up for human freedom and dignity,” she said.

Mrs. Rajavi also stressed that the ongoing rallies and demonstrations of freedom-loving Iranians and supporters of the Iranian Resistance outside a Stockholm court “are yet another glorious feature of the Call-for-Justice Movement.”

Dominique Attias, French Lawyer Specializing in Personal Rights, Juvenile Law, and Violence Against Women: This is a grave day. We know what is happening in Iran. Thanks to you and your efforts, these martyrs will be avenged. These murderers have reached the peak of their crimes. This destruction of the lives of mothers, sisters, children.

Geoffrey Ronald Robertson, QC, Is a Human Rights Barrister, Academic, Author, and Broadcaster: It has been a crime to kill prisoners for centuries. The difference is that if it amounts to a particular crime of genocide, there is an international convention that binds countries to take action and punish that genocide.

Theo Van Boven, Director of the UN Division of Human Rights (1977-1982) and UN Special Rapporteur on Torture (2001-2004): We call for an independent inquiry by the United Nations into the 1988 massacre and the accountability of Raisi.

Kumi Naidoo, Secretary-General of Amnesty International (2018-2020): The 1988 massacre was a brutal and bloodthirsty massacre and a genocide. It is moving for me to see the strength and courage of people who have been through so much and seen so much tragedy and endure these atrocities. I would like to pay tribute to all the PMOI prisoners and applaud you.

Audronius AžUbalis, Minister of Foreign Affairs of Lithuania (2010 – 2012) and Member of Parliament: No one has yet faced justice for this crime against humanity. There is no political will to hold the perpetrators to account. A UN investigation into the 1988 massacre is a must.

Eric David, Professor of International Law from Belgium: All international jurisdictions can try this crime. If a regime official is in any country, that country can easily accuse and try that person for his responsibility in the 1988 massacre. We have no difficulty judicially bringing this case to court.

Gulnara Shahinian, UN Special Rapporteur on Contemporary Forms of Slavery (2008-2014) From Armenia: When atrocities are not punished but the perpetrators are recognized as heroes, this does not reflect the people of the country nor the families of the victims. Little has been done to address the issue of mass graves.

Mass graves are places of evidence and critical for justice. They are proof that heinous events took place that must never have happened.

Iranian Resistance leader Massoud Rajavi warned instantly about a massive wave of political executions in Iran as the massacre began.

Since then, the Iranian Resistance has issued thousands of statements, held many conferences, published documents, and taken other measures to prevent this genocide from being forgotten.

Sima Mirzaei, a Relative of the Victims of the 1988 Massacre: Regime torturer Assadollah Lajevardi told my father we will burn your roots because your children are PMOI supporters.

One of my brothers was 16 years old when he was arrested. The torturer told my mother I personally shot your son in the head.

Franco Frattini, Foreign Minister of Italy (2002–2004 and 2008–2011): Anyone who has laid their lives down for the non-negotiable rights of humans is forever a source of inspiration.

The actions of the new government of Iran are in line with the regime’s history. The new foreign minister has served under previous governments. There is no difference between conservatives and reformists. It is the same regime.

This is confirmed by the foreign minister’s closeness to the commander of the Quds Force. He even confirmed that he will continue the path of Qassem Soleimani.

Guy Verhofstadt, Prime Minister of Belgium (1999 to 2008): The 1988 massacre targeted an entire generation of young people.

It is crucial to know that this was planned in advance. It was the consequence of the regime itself. The regime is always trying to brutally silence those who ask for the improvement of human rights and freedoms.