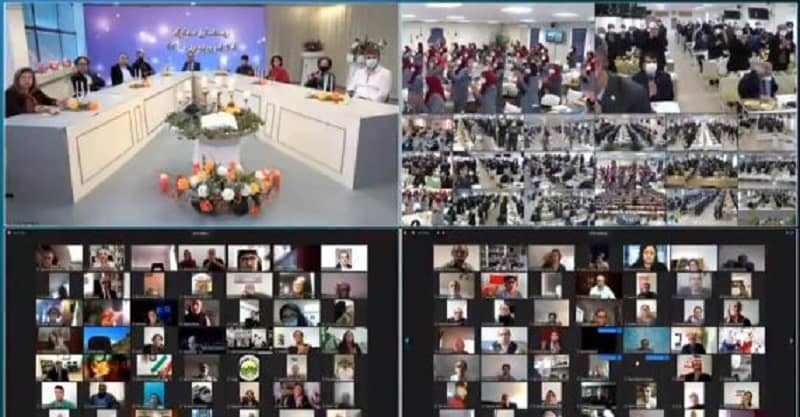 The National Council of Resistance of Iran (NCRI), and the People’s Mujahedin of Iran (PMOI / MEK Iran), reported on a conference marking the holy month of Ramadan: “Islam, a religion of mercy, brotherhood, equality, and solidarity among all faiths, and against extremism”.

On Wednesday, April 14, 2021, on the invitation of the International Islamic Committee in Defense of the Mujahedin-e Khalq (PMOI / MEK Iran) and the Iranian Resistance. The conference connected over 2000 locations in 40 countries to the members of the MEK at Ashraf 3.

The Editor-in-Chief of the Arab Times and Al-Seyassah newspapers Ahmed Al-Jarallah decried the “backward” Iranian regime for depriving the Iranian people of “their great civilization”.

Al-Jarallah, who speaking at the National Council of Resistance of Iran’s (NCRI) online Ramadan celebration in Paris, advised that the export of sectarianism throughout the Middle East and the build-up of the nuclear weapons program is exhausting the region and that the country would remain isolated until the regime is overthrown, without realizing its dreams of regional domination.

He said that the situation in Iran must be reviewed now because of the threat posed to the wider region by both the terrorist proxy groups, like Hezbollah, Hamas, and the Popular Mobilization Forces and the production of weapons of mass destruction.

Al-Jarallah said: “Demons own these weapons. We can say it is possible for them to possess such weapons to threaten the entire humanity.”

Also in his speech, he praised the NCRI, which is affiliated with the People’s Mujahedin of Iran (MEK), and said that the whole world should be standing with them in order to bring down the regime, which poses a threat to the world at large.

Al-Jarallah then spoke about NCRI President-elect Maryam Rajavi, who has led the Resistance movement for nearly 30 years now, saying that like many others he is supporting her in her quest to overthrow the mullahs, “take over the reins of leadership”, and free the “great people” of Iran from the suffering caused by the Iranian Revolutionary Guard Corps (IRGC) and the regime as a whole.

He said: “Thank you to the esteemed lady – Maryam Rajavi. I wish she takes over the mantle of power in this country for the evils in this region to end; especially since the region is known for the cooperation and good relations between its countries.”

Rajavi also spoke at the event and warned that the Iranian regime’s destructive policies across the Middle East have serious repercussions, not just for the people of those countries but also the Iranian people themselves.

Mrs. Maryam Rajavi the President-elect of the National Council of Resistance of Iran (NCRI)in her speech, congratulated the advent of the holy month of Ramadan to all Muslims, particularly to those in Iran and neighboring Iraq, Syria, Yemen, Lebanon, Palestine, and Afghanistan, who are victims of the mullahs’ religious fascism.