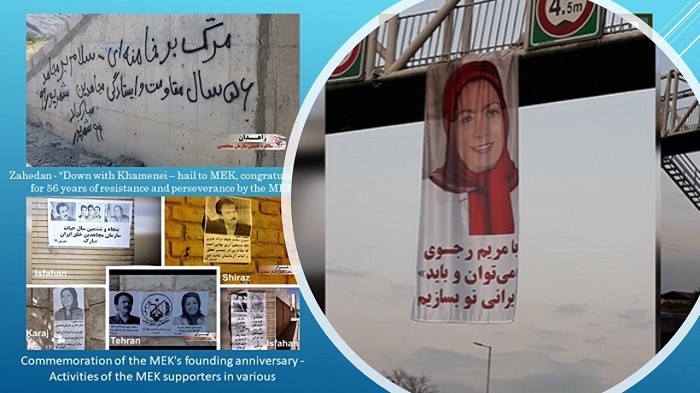 The situation in Iran has been growing increasingly tense over the past few months. The people of Iran are angry because of the situation they have been left in by the regime. The country’s economy is in tatters and the people are struggling with their daily lives amid the current Coronavirus health crisis that has claimed the lives of more than 111,300 people across the country, according to reports by the People’s Mojahedin Organization of Iran (PMOI / MEK Iran).

Brave and defiant young people supporters of the (PMOI / MEK Iran), in Iran over the past few days have been targeting Basij bases in a number of cities.

The Basij Force is the suppressive branch of the notorious Islamic Revolutionary Guard Corps (IRGC). The force has been one of the major suppressive branches of the Iranian regime and is always present to push back against protesters during anti-regime demonstrations and rallies organized by the MEK resistance unit. It is a paramilitary force and its aim is to preserve the rule of the mullahs.

The Basij bases in Khorramabad, Shiraz, Mashhad, Najafabad, and Kazeroun were targeted, as well as a center in Karaj that promotes fundamentalism.

At the same time, there was a lot of activity in the capital city Tehran where people were seen burning posters and images of Supreme Leader Ali Khamenei. The MEK supporters young people were also seen burning images of Qassem Soleimani – the commander of the IRGC’s Quds Force who has been nicknamed Iran’s top terrorist. He was killed, much to the joy of the people of Iran, earlier this year during a drone strike by the United States. He was the embodiment of the regime’s terrorism and was involved in numerous attacks across the region.

The #Iranian Resistance Units, which are linked to the #MEK, continued their anti-regime activities for three days last week, calling for regime change and public support for the MEK. #FreeIran2020 pic.twitter.com/glY14WMcCO

The people of Iran are desperate to see the regime fall. They want freedom, democracy, and the respect of human rights, and they know that these are impossible to achieve while the mullahs hold power.

The (PMOI / MEK Iran) – the main opposition to the Iranian regime – and the people of Iran are the biggest threat to the regime’s existence. They are certainly going to be the force behind regime change and they are getting closer to their goal of seeing the regime collapse.

The regime is very aware of this and it is trying to quash dissent by cracking down hard on protesters. However, this is having the opposite effect of what the regime intended. Instead of making the people too scared to speak out, they are more determined than ever to ensure their voices are heard.

After the execution of wrestling champion Navid Afkari, the people of Iran and political prisoners across the country have vowed to continue fighting for freedom in his name. The Resistance is more united than ever and it will continue to fight for freedom from the regime.