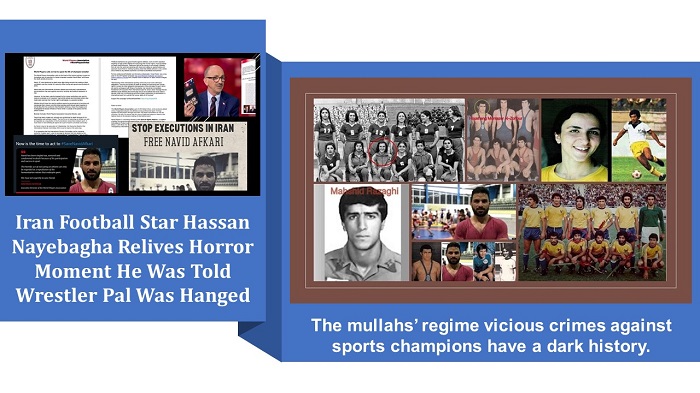 Following the execution of Navid Afkari, the Wrestler champion, a former Football icon, demands an end to the terrorist regime. He is called Hassan Nayebagha and he was a player for Iran’s national football team and went to the 1978 World Cup in Argentina.

In this article, Hassan recalls how a colleague clearly upset and in tears entered his office and spoke the following words: “Navid was hanged.” Poor Navid was hanged for taking part in an anti-regime protest in 2018.
There had been widespread international disapproval of the death penalty for Navid but this fell on deaf ears.

Hassan recalled a time on June 25th, 1984 when he was told a friend of his called Habib Khabiri had been executed by the mullahs’ regime. He was also a football player and had played in the 1978 World Cup. Habib joined Iran’s leading pro-democracy opposition group, the People’s Mojahedin Organization of Iran (PMOI / MEK Iran) after the 1979 revolution. It was not until 1983 that he was arrested and tortured in the same way Navid was.

Iran sports champs write a letter to save the life of protesting wrestler https://t.co/KkHJ8b6O2O via @StopFundamentalism

Hassan mentioned Houshang Montazeralzohour, who was a champion of Iran in the 82kg class in Greco-Roman wrestling for many years. As a member of the MEK, he was also executed.

These are not the only victims of the regime but over 40 plus years 120,000 Iranians have been executed just for fighting for “freedom and democracy in Iran.’’

Unfortunately, as the anti-regime voice gets even louder, the regime doesn’t try to compromise but has become more violent at quelling opposition both at home and abroad. The West has done nothing but appeases what Iran is doing and this goes back to 1988 when 30,000 political prisoners were massacred.

It was not the first time that Iran had executed an athlete like #NavidAfkari. In fact, since the regime’s existence in the several athletes have been executed for what they believe. https://t.co/fXf4KQvMQn #MEK #Iran pic.twitter.com/3bL90p3fCa

Many of these prisoners had already served their terms but they were still killed. It was what was called the ‘death commission’ that decided the fate of these people in just a matter of minutes and by a group of three. This death commission was authorized by the regime to stifle and end any opposition.

Ebrahim Raisi was one of those who made decisions about thousands of prisoners’ final fate and he is now the current Head of the Judiciary. Similarly, the present Minister of Justice was also involved in these crimes against humanity.

There have been investigations into the mullahs’ actions but nothing much has resulted from this.

Afkari’s death sparked widespread international outrage, coming in the wake of weeks of global appeals for the #Iranian regime to revoke the death sentence. Afkari’s execution was carried out on the basis of forced confessions been obtained via torture.#MEK #Iran #FreeIran2020 pic.twitter.com/Nlz0byY2ZX

“As the president-elect of the National Council of Resistance of Iran, Maryam Rajavi, has pointed out, the regime cannot survive for a single day without mass suppression, execution, and torture.’’ It has used Navid as a way of scaring the Iranian people. However, it appears that this time Iranians are outraged by the loss of Navid and already Iranians have paid heavily for the international communities’ appeasement policies towards the mullah’s tactics. Remaining silent means that the regime can continue unabated.

The article ends by urging the UN General Assembly to request an independent international investigation into the massacre of 1988.

This is an article written by the website, “Brinkwire”.