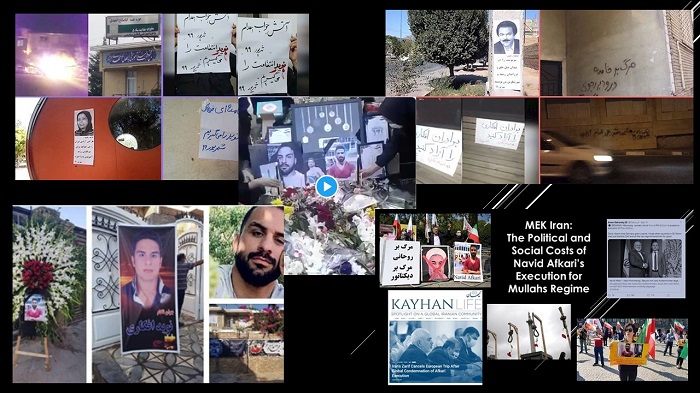 Many protest activities in honor of slain wrestler, Navid Afkari, have taken place across Iran in recent days. The protest activities were mainly carried out by the Iranian Resistance Units allied to the People’s Mojahedin Organization of Iran (PMOI/MEK).

Navid Afkari was hailed as a national hero by the MEK’s supporters in Iran, who pledged to continue their path to rid Iran of the mullahs’ regime.

MEK Resistance Unit members risked arrest by graffitiing walls and buildings in more than 40 cities across Iran in protest of the recent execution of Navid Afkari.

The members of the MEK’s network inside of #Iran organized activities hailing #NavidAfkari as a national hero and pledged to continue his path to overthrow the genocidal mullahs’ regime.https://t.co/c4w5QI1eCB

Huge banners of the resistance leaders, Massoud Rajavi and Mrs. Maryam Rajavi, were displayed in many Iranian cities. The regime is trying to suppress the opposition by heavy-handed arrests and executions, aimed at frightening the Iranian people into submission. However, the protest activities of the Resistance Units are helping to show that there is an alternative to this brutal regime.

Supreme Leader, Ali Khamenei, is attempting to raise the sagging morale of his own regime and the forces of oppression that prop it up, but everything the regime does simply angers the Iranian people more than ever. The Iranian people will soon honor Navid Afkari and countless other arrested and executed political activists by overthrowing the regime and replacing it with a more enlightened and democratic alternative.

Navid Afkari took part in peaceful protests against the regime in Iran in 2018, but was arrested and was then tortured to extract a confession from him. He was executed for a crime he did not commit.

Defiant youth have carried out activities against the most hated of Iran’s agents of oppression. Three Basij bases in Eslamshahr, Khorramabad, and Isfahan have been set alight. The Basij is designed to crack down on protest activity wherever it occurs in Iran.

In both Shiraz and Sari, fundamentalist centers have been attacked by rebellious youth. These centers represent the hated Supreme Leader, Ali Khamenei.

#MEK: The #Iranian regime hastily and secretly buried the body of Navid Afkari, a wrestling champion executed on Saturday. A week earlier the mullahs destroyed a mass grave for victims of the 1988 massacre in southwest #Iran pic.twitter.com/eRC7EAHfsZ