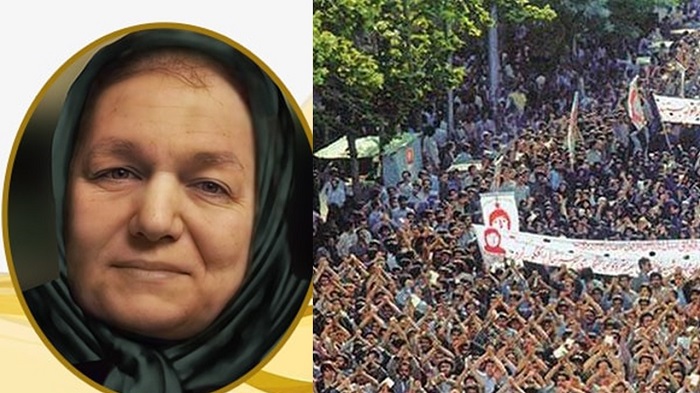 She periodically related the events of Dr. Mosaddeq’s era and the actions of the anti-Shah opposition organizations throughout the terrible years of the 1950s and 1960s, when she had her own family. She created an atmosphere of opposition within the household and among her children.

When her children were in high school before the 1970s, they began to read books on current revolutions and anti-dictatorial movements. At the time, these publications were prohibited.

Her hopes were not broken by the arrests of two of her sons for supporting the PMOI. She supported their cause because she believed their principles were correct.

Alireza was murdered by the Shah’s secret police, SAVAK, in November 1976. She was proud of her son, who gave his life for the freedom of his people. She spoke out for him in front of his family and friends. She expressed her pride in her son and all he has done for his country when they expressed their condolences.

The Shah’s SAVAK investigated her home several times, but they were unable to find any proof because she had already removed all anti-Shah publications and papers and hidden them in a secure location.

Malektaj Farazdaghi’s house has been a gathering place for PMOI activists and a safe place for them since the 1979 Revolution deposed the Shah.

She was in touch with other PMOI-supporting women. In ceremonies, she would occasionally read the PMOI statements. As a result, the regime’s intelligence agencies in Shiraz had recognized her, and she was subjected to relentless harassment and attacks.

Mother Olfat instructed her younger son, Ahmad Reza, to introduce himself as a citizen of Abadan who had gone to Shiraz with his family after the war in case he was detained after June 20, 1981, when Khomeini began his ruthless crackdown on freedom fighters.

Following Ahmad Reza’s arrest, she paid him a visit under the same guise. Ahmad Reza’s mother was able to gain his release after the Department of Intelligence was unable to identify him.

When the Intelligence Ministry realized, they had been deceived into releasing Ahmad Reza, Mother Olfat was imprisoned and beaten severely.

The mother was attacked by a motorcycle and ran over by the regime’s mercenaries a year after she was freed from prison, leaving her unable to walk for a long time and requiring therapy. Despite this, she kept her positive attitude and cheerfulness.

Mother Olfat always endorsed the PMOI’s path, and as long as she lived in Shiraz, the door of her house was open to the young members of this movement.