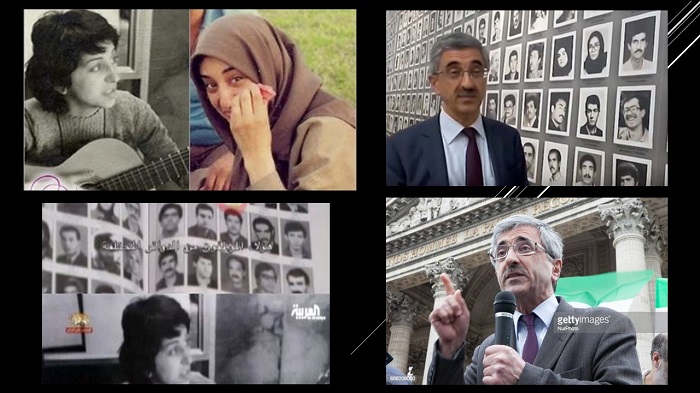 The second and third sequences of the “Hellish era” television program “Al Arabiya” was an interview with NCRI Foreign Affairs Committee member, Mr. Behzad Naziri. He speaks about his sister Gity’s martyrdom, his father’s arrest, and his escape from the infamous Evin prison.

After suffering the hardships of being imprisoned, Gity was executed 40 days before the arrest of Behzad at age 24 in 1982.

Forty days after the execution of Gity, an arrest warrant was issued for Behzad and was arrested respectively by the regime’s revolutionary guards. A week before he was working for the ‘Agence France Presse’, and was sent to Evin Prison to accompany French reporters while his sister had already been imprisoned.

The Iranian regime wanted to put on a display for the journalists by pretending that nothing was going on inside the jail. In February 1982, a group of reporters from the French television channel (TF1) and Agence France Presse (AFP) went to Evin Prison.

In the program, Behzad told of the torture that some of the prisoners were subjected to:

“There was this prisoner by the name of Shams-ed-din Moqadasi. I could not see him as I was blindfolded; I just asked his name. He said that he had been forced to drink a lot of water such that his stomach had bulged out. Then the revolutionary guards stepped on his stomach with their boots so that the water would come out while he was close to suffocation.”

Unlike his sister, Behzad escaped Khomeini’s prison after three years while he was being transferred temporarily. With the assistance of the resistance network and the (PMOI / MEK Iran), he crossed the borders and arrived in Pakistan. However, he states that the emotional burden won’t heal until the regime is made accountable for the crimes and human rights violations committed.

“I escaped Khomeini’s prison after three years. They were relocating me for medical treatment where they had to temporarily bring me out of the prison and I escaped. The Iranian regime arrested my father as a hostage. I quickly left Iran with the assistance of the resistance network and the (PMOI / MEK Iran). I went to Karachi in Pakistan via the Sistan and Baluchistan border.” Behzad told Al Arabiya.

“These are glimpses of the crimes of those years and I am still carrying the scars of that on my body and in my heart. It is still new. My scars will heal only when the perpetrators of these crimes face justice.” He added.

During that time, a total of 120,000 people were executed by the regime, largely members of the (PMOI / MEK Iran), and many of them were buried in unknown graves.

“Of the 120,000 that were executed in those years, the names and particulars of 20,000 of them were gathered by (PMOI / MEK Iran)’s a social network. They are from various strata of the society.”

The 1988 massacre saw the Iranian regime kill around 30,000 political dissidents over several months. This was following a fatwa from then-Supreme Leader Khomeini which said that regime opponents were waging war on God himself.

This was to target the People’s Mojahedin Organisation of Iran (PMOI / MEK Iran), which remains the leading democratic alternative to the theocratic regime.