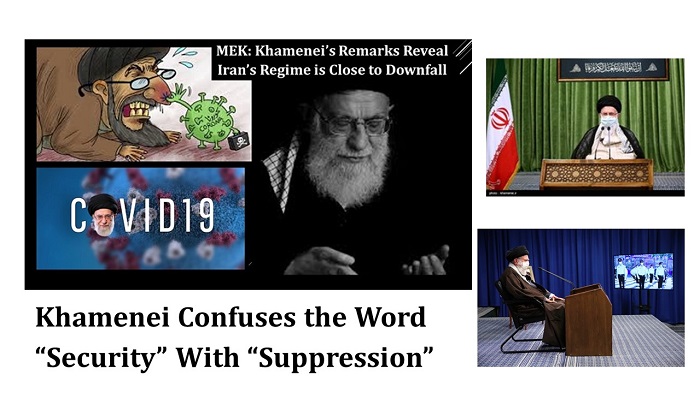 Iran’s supreme leader, Ali Khamenei, talked up the role of the security forces in an online meeting with graduates of the Armed Forces universities. “Education in the Armed Forces’ universities is one of the most valuable tasks because they preserve the state’s security. Without security, all of our values will fall into disorder. Security is a critical element for the state,” he said.

By “security”, of course, Khamenei means “suppression.” The regime is expecting some sort of protest when the anniversary of the November 2019 uprising comes around soon, so it is no coincidence that the state security forces (SSF) get the nod to rev up their “security” role.

the People’s Mojahedin Organization of Iran (PMOI / MEK Iran) Resistance Units on the ground mobilized existing supporters to organize the ongoing protests, but the stage was set. The (PMOI / MEK Iran) has a strong presence inside Iran and does not need a false pretext to get people into the streets. Resistance is a response to people’s anger and disenfranchisement.

Right on cue, the SSF got busy suppressing and intimidating ordinary citizens around the country. In Tehran, several youths were targeted, and called “thugs and hooligans.” I addition, they executed several people, attacked porters in Kurdistan and Kermanshah, and raided youths’ celebrations in Golestan.

The anniversary of the November 2019 protests will remind ordinary Iranians about the vicious nature of the regime’s suppressive forces. Economic grievances at the time, sparked by a sudden hike in gasoline prices, quickly turned to political protest against the regime and its thuggish incompetency. The protests called for the regime to be overthrown, a prospect that terrifies the mullahs.

Several young people in Tehran were picked up indiscriminately by the SSF, who paraded them in front of the public on the backs of their pick-up trucks. The youths were called “thugs and hooligans” but the act of humiliating backfired and angered the public. Even Ebrahim Raisi, the judiciary chief and not known for his liberal views, moved to curtail the behavior of the SSF. This was not the first time that the SSF had acted in such a disgusting way.

Citizens killed and harmed in Kurdistan and Kermanshah

Drivers and merchants were cruelly targeted in several incidents in both Kermanshah province and Kurdistan. In Dolat-Abad, in Kermanshah, the SSF attacked a car driver, who was killed. Another occupant of the car, a 17-year-old youth, was so badly injured that he remains in a coma.

Some merchants in Kurdistan were accused of smuggling. One car chase by an SSF vehicle led to the death of a married man who had two young children.

Young people enjoying themselves across Golestan were targeted by dozens of Basij forces in Golestan on October 14th. 19 young boys and girls were arrested. The thugs who arrested them called the innocent youth “thugs!”

Humiliate people by parading them in the streets and beating them in front of the public while they are pleading for forgiveness. This is a method being used by the regime to scare Iranians from taking part in #MEK #Iran resistance movement https://t.co/4rAC8LpVCl

Executions stepped up in Iran

Executions have continued in Iran. Many who have been executed have been sentenced to death on trumped-up charges and denied their own legal aid. These are just some of the more recent executions:

Iran's Hit Squads #DisbandIRGC
Called Razaviyoun Patrols, created to take rapid reaction towards widespread protests like Nov 2019.
Coming close to 1 year, the regime prepares itself in 30 provinces. This is a coordinated effort by IRGC, SSF and the Judiciary #NoImpunity4Mullahs pic.twitter.com/dPUqwWADW5

The use of suppression has become the weapon of choice by an increasingly socially isolated and corrupt regime. The regime has failed to realize that the reason why people protest is that it is increasingly seen as mismanaging the economy while becoming more and more corrupt.  Every act of suppression simply alienates the ordinary people of Iran even further.

Iranian Resistance, the National Council of Resistance of Iran’s (NCRI), and the People’s Mojahedin Organization of Iran (PMOI / MEK Iran) reported that Mohammad Reza Yazdi, commander of the criminal “Mohammad Corps” in Tehran, said: “The Razavioun patrols, which were created to provide security, started (a series of) preparations two years ago.

In step with the growing social disgruntlement, #Iran officials have resorted to new means of imposing repression. The IRGC put up a show of force by announcing formation of “hit squads” &“Bassij local patrols” to preserve the “security of neighborhoods.”https://t.co/dwaUsLpMjR