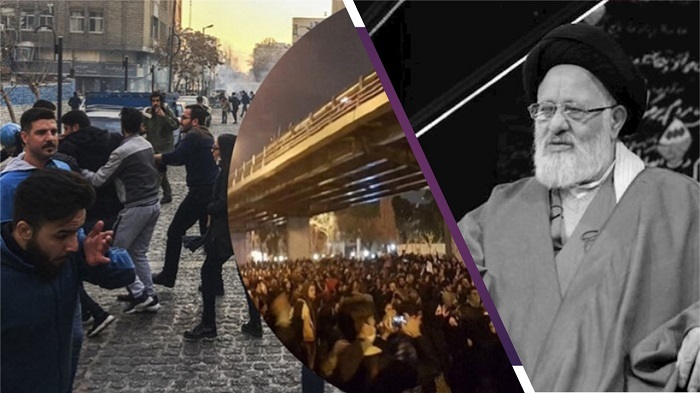 By Jennifer Jones-Kelley – Iranian regime Supreme Court judge Ahmad Sajjadi discussed the (PMOI / MEK Iran) role in the 2019 Uprisings in an interview with state television on Thursday, June 4. Sajjadi revealed the regime’s fear of the (PMOI / MEK Iran) and their power to lead another uprising and suggested that the mullahs will follow in regime founder Ruhollah Khomeini’s footsteps in trying to eliminate the (PMOI / MEK Iran).

Sajjadi claimed that the widespread protests in November 2019 were planned and carried out by (PMOI / MEK Iran) members outside of Iran. “Under the gasoline pretext they created unrest across the country, then this turned into insecurity. This was all pre-planned for the entire country and it was carried out from abroad and the (PMOI / MEK Iran),” Sajjadi said.

In fact, the November Uprisings were sparked by a sudden hike in petroleum prices. Prices were raised without warning, causing immediate outrage in cities across Iran. Within hours, tens of thousands of people were in the streets protesting and calling for the overthrow of the regime. The government shut down the nation’s internet access almost immediately. (PMOI / MEK Iran) Resistance Units on the ground mobilized existing supporters to organize the ongoing protests, but the stage was set. The (PMOI / MEK Iran) has a strong presence inside Iran and does not need a false pretext to get people into the streets. Resistance is a response to people’s anger and disenfranchisement.

“He is firm in critical situations, such as last year’s ordeal where they caused havoc in many cities,” Sajjadi said. Of course, Khameini’s firm approach failed in January of this year when protests broke out again over the regime’s coverup of the downing of a Ukrainian airliner by Revolutionary Guards (IRGC) missiles. Khameini was also unable to prevent a large scale boycott of the regime’s Majlis (Parliamentary) elections in February.

“For gasoline…” the continued.

Iranians consider oil and gas their birthright. It is wealth that belongs to the people. More than 80 percent of Iranians live below the poverty line, and fuel was one of the few remaining necessities that were affordable. To call this a pretext for an uprising is insulting.

“[Khamenei] took control with serious and determined measures, saying he agrees with the opinions of the heads of the country’s three branches and rounded up the entire unrest. It was obvious there would be sedition. There were signs that this was orchestrated for measures across the country, and it was carried out from abroad and by the (PMOI / MEK Iran). The foreigners were very happy about it all; this wasn’t any ordinary sedition,” he explained.

Again, the nation’s internet access was shut down during the uprisings, which began spontaneously and spread within hours of the announcement of the price hike.

The interviewer moved on to Ruhollah Khomeini’s views on the (PMOI / MEK Iran). Khomeini orchestrated the 1988 Massacre of 30,000 political prisoners, most of whom were MEK members or supporters. “I read somewhere about you on [Khomeini’s] unique viewpoints during his time in the resistance; such as his sensitivity and insistence on the issue of Palestine or his opinion about the (PMOI / MEK Iran) organization. They were coming to see [Khomeini] for a talk and [Khomeini] realized very well their perspectives and intentions. He was far ahead of many others. I even read your work that many of the scholars were approving the (PMOI / MEK Iran),” he said.

“One of the (PMOI / MEK Iran) came to see [Khomeini] and he was reading from an important Islamic book. I was suspicious and later I realized that deep down they don’t believe in such things,” Sajjadi responded.