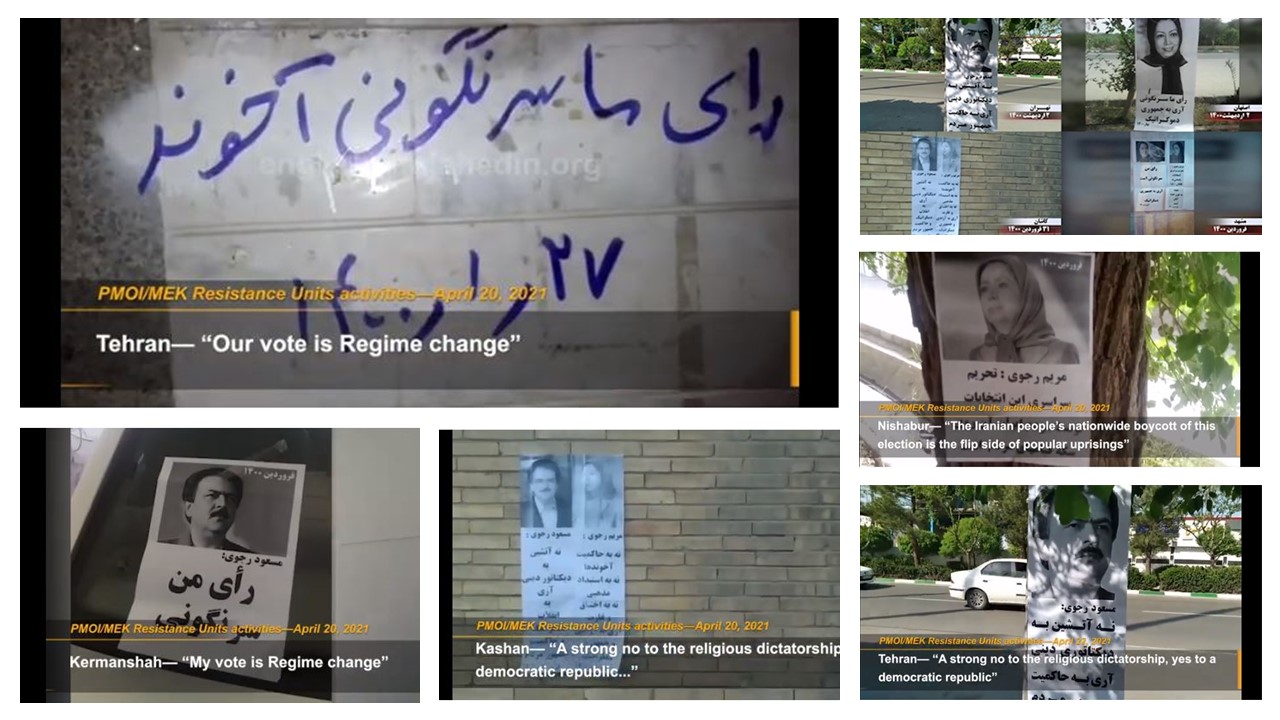 The National Council of Resistance of Iran (NCRI), and the People’s Mujahedin of Iran (PMOI / MEK Iran), reported that the internal network of the MEK continued its campaign across the country calling for a boycott of the upcoming regime’s sham Presidential election.

MEK Resistance Units, the network of the People’s Mujahedin of Iran (PMOI / MEK Iran) inside Iran, continued its campaign to boycott the mullahs’ regime presidential elections in June.

Their slogans Resistance Units read “Our vote is regime change and boycott of the sham elections,” “Boycotting the election sham is a patriotic duty,” “No to the mullahs’ rule, no to religious tyranny, yes to a democratic republic.”

The election boycott has turned into a vast social movement these days and in various protests across Iran where people chanted, “We have seen no justice and we will not vote.”

Even the regime’s state-run media warned that “the main contender” in the elections is the low turnout.

Economic circumstances caused by the mullahs regime’s destruction have exacerbated the social outrage toward clerical rulers, which has reached a boiling point after more than four decades of corruption.

In the last two years, the Iranian people have expressed their desire for regime change in five nationwide uprisings. The latest was in November 2019, in which the security forces gunned down 1500 innocent protesters in the streets.

The November protests have become a turning point and many within the regime acknowledged that its dust has still not settled.

Mullah’s regime expects very low participation in the elections, and the daily activities of the Iranian Resistance Units across the country are fueling this social movement that has already found deep roots in the Iranian population.

The Resistance Units installing huge posters of the Iranian Resistance leader Massoud Rajavi and the President-elect of the National Council of Resistance of Iran (NCRI) Maryam Rajavi in Tehran, Isfahan, Mashhad, Kashan, Nishabur, and Islam Abad.

Other slogan read on the placards are: “A strong no to the religious dictatorship, yes to a democratic republic,” “No to the mullahs’ rule, no to religious tyranny, no to repression, no to looting, and yes to freedom and a democratic republic,” “The Iranian people’s nationwide boycott of this election is the flip side of popular uprisings,” “The election boycott is a response to the killing of 1500 protesters in November 2019,” and “My vote is regime change and boycott of the sham elections,” the slogans read.