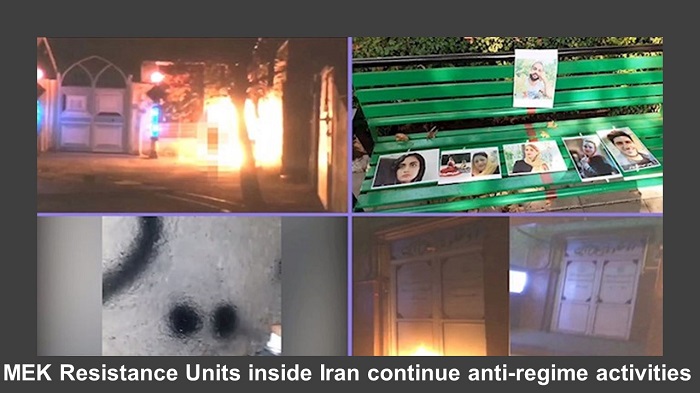 The Iranian regime has been cracking down on the People’s Mojahedin Organization of Iran (PMOI / MEK Iran) and its supporters and their family members. There has been an alarming number of arrests in recent times but the (PMOI / MEK Iran)’s Resistance Units have not been deterred and have continued their activities across the country.

In the past few days, there have been a number of anti-regime activities organized by the MEK Resistance Units in various cities.

They have been drawing attention to many of the regime’s crimes, in particular the recent execution of national hero Navid Afkari, the 27-year-old wrestling champion that was arrested after participating in a major protest.

And the MEK Resistance Units also displayed anti-regime slogans in a number of cities. Many of these slogans were against the country’s Supreme Leader Ali Khamenei and Iranian President Hassan Rouhani.

Some of the slogans were as follows:

“We will overthrow the regime despite their executions”,

“Political prisoners must be freed!”,

“The Supreme Leader’s end is near”,

“The only path to freedom is to revolt and protest;

Down with Khamenei, hail to Rajavi!”

With regards to Navid Afkari’s execution, the following slogans were seen in cities across the country:

“We will avenge Navid’s execution”,

“We will continue Navid’s path”, “The gallows are a medal of honor for Navid Afkari”,

“The execution of Navid Afkari will only add fuel to the flames of the Iranian people’s uprising”,

“Navid lives in us and we will rise up against the regime”,

“The only solution to prevent executions of more youth like Navid is to revolt and protest”.

There have been a number of uprisings in Iran in the past few years and, with everyone that happens, the regime gets weaker and weaker.

The (PMOI / MEK Iran) and the internal network of Resistance Units are a source of support for the people. They help the people be organized in their protests and they keep the flame of resistance alive.

Over the past few days, there has been anti-regime activity in numerous cities – Isfahan, Mashhad, Kermanshah, Gorgan, Shiraz, to name just a few. And of course in the capital city Tehran.

The Iranian regime has been cracking down on protesters and supporters of the main opposition (PMOI / MEK Iran) because it knows that the people are going to be the force behind the regime’s eventual collapse.

The regime is weakening and it is doing everything in its power to silence the people.

However, people have refused to remain silent. After the execution of Afkari just a few weeks ago, political prisoners wrote open letters from jail where they vowed to continue resisting against the cruel and brutal regime.

The young people of Iran in particular have been showing their anger. Last week, rebellious young people torched posters of the Supreme Leader. They also torched IRGC Basij bases, showing that they will not let this suppressive force try to silence them. Young people also torched one of the regime’s propaganda centers.