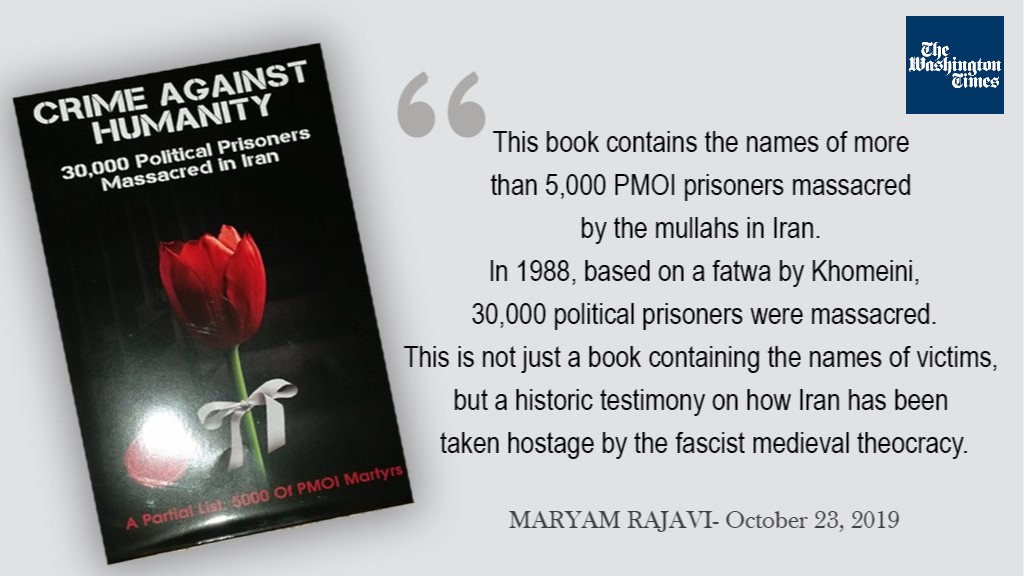 The People’s Mojahedin Organization of Iran (PMOI, Mujahedin-e Khalq or MEK Iran) released a new book about the massacre of 30,000 political prisoners in Iran in 1988.

In a conference at the European Parliament in Strasbourg on October 23, the National Council of Resistance of Iran president-elect Maryam Rajavi said: “This is not just a book containing the names of victims, but a historic testimony on how Iran has been taken hostage by the fascist medieval theocracy.”

The book, entitled “Crime Against Humanity”, contains the names of 5,000 victims of the 1988 massacre, as well as the names of regime officials and Death Commissions involved, shedding new light on what many human rights and legal experts have described as the worst crime against humanity since WW2.

Rajavi said: “This book contains the names of more than 5,000 PMOI prisoners massacred by the mullahs in Iran. If I were to summarize the situation in Iran after 40 years of the rule of religious fascism, I would say: Iran is a massacred country where, in addition to political prisoners, its natural resources, culture, and environment have all been massacred… It is the story of a nation suppressed by anti-human mullahs at home. Unfortunately, the outside world has ignored not only the violation of human rights and the suppression of freedoms but also an organized resistance to this regime.”

Crime against Humanity is a book containing the names of over 5,000 victims of the #1988massacre in #Iran, also addresses of the tombs & mass graves in 36 cities, names of members of 35 Death Commissions, & lists 110 cities where the massacre was carried out. pic.twitter.com/P8iJqAzXJo

The massacre took place during the summer of 1988 after then-supreme leader Ruhollah Khomeini issued a fatwa calling for the executions of MEK activists held in prison for peaceful political activism.

In the intervening 31 years, the Regime desperately tried to hide evidence by imprisoning and even executing those who spoke loudly enough about the deaths of family or friends, destroying mass graves, and promoting those responsible for the massacre to protect them from punishment. The mullahs even went so far as to burn the files of executed MEK prisoners to deny their existence and threaten the families about holding funeral ceremonies for their relatives.

Ebrahim Raissi, Who Was Involved in the Massacre of 1988 Is Appointed Head of Iran’s Judiciaryhttps://t.co/5Ivxgvamab#Iran #1988Massacre #MEK #PMOI #HumanRights pic.twitter.com/BJnrguxaVg

Even now, we do not know exactly how many people were executed because many prisoners were buried in secret mass graves and the only ones who know for certain are the regime officials involved. The only way we will find out is with the overthrow of the mullahs’ regime.

Since then, the regime has engaged in widespread suppression of the MEK across the world because they have never received any sort of international condemnation for the massacre.

The publication of 5,000 names of the MEK prisoners is significant and would have been impossible without the hard work of the MEK’s network inside Iran, but every martyr whose name becomes known represents tens of others whose fate is unknown.