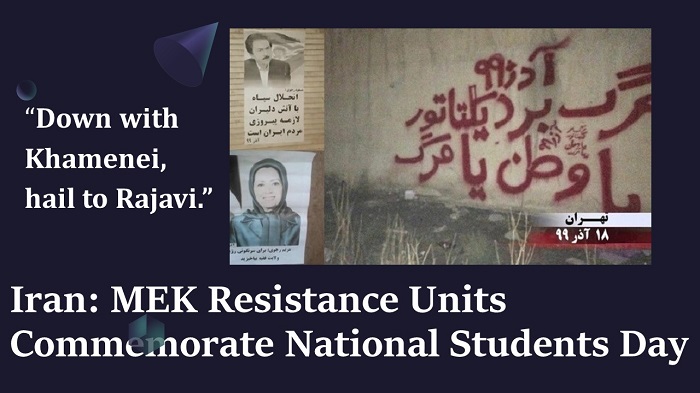 Even though the regime has imposed more repression on protesters in recent weeks, this hasn’t stopped the resistance movement from organizing anti-regime activities on National Students Day which took place in cities across the country recently. The main theme of the activists affiliated with the main Iranian opposition movement the People’s Mojahedin Organization of Iran (PMOI / MEK Iran) was to continue campaigning for a regime change as a matter of urgency.

In several cities, the Resistance Units posted anti-regime slogans and posters of the Iranian Resistance leader, Massoud Rajavi, and the President-elect of the National Council of Resistance of Iran (NCRI), Maryam Rajavi. In Tehran’s center, there was a large poster of Massoud Rajavi posted which included the slogan: “Rebellious youth supporters of (PMOI / MEK Iran) will write Iran’s destiny.”

There have been several slogans circulating throughout the country which were aimed at the supreme leader. Ali Khamenei. They are:

Recently, a renowned Iranian academic, Dr. Mohammad Maleki, died. He was the first chancellor of Tehran University after the 1979 anti-monarchical revolution and a long opponent of the Iranian regime. His life was also remembered.

The resistance movement didn’t forget to spread slogans about the IGRC who was and still, is the main institution responsible for the repressive tactics used against protesters, and for plundering the Iranian people’s wealth.

The main slogan spoken was “The IRGC must be disbanded.”

The regime is constantly angry about (PMOI / MEK Iran)’s activities and the fact that its support is growing within the country. Between 1980 and 2020, the regime had published at least 538 books, and 180 movies discrediting the (PMOI / MEK Iran). Most of the themes were telling the audience that the current regime was the best and there was no viable alternative. However, in practice, this isn’t the truth as the (PMOI / MEK Iran) has played a leading role in leading and organizing major anti-regime protests in both November 2019 and January 2018.

Only recently, disaffected youth have targeted 5 IRGC Basij bases in Tehran and Mashhad, including a warehouse of the Khatam al-Anbia garrison, an important IRGC initiative, which has used much of Iran’s wealth and resources to be spent on terrorism and various nefarious projects.

In Isfahan and Khorramabad, the youth burned down two centers responsible for spreading fundamentalism and Sharia Law. This included the office of the supreme leader’s representative and the Friday prayer imam of Khorramabad. These institutions are instrumental in paving the way for suppressing the Iranian people and stealing their wealth. Khamenei forces his suppressive policies on people in the cities through his representatives and Friday prayer imams.