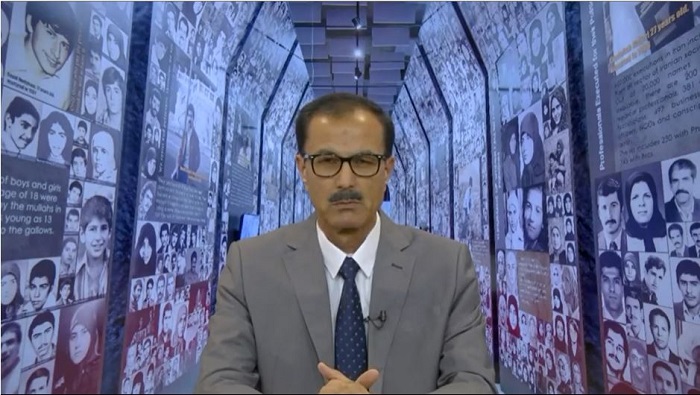 My name is Heydar Yousefi, a member of the People’s Mojahedin Organization of Iran (PMOI / MEK Iran).

I was arrested twice and was sentenced to a total of 12 years in prison. During the massacre of political prisoners, the situation was totally different in my opinion than the circumstances before the 1988 massacre.

And the difference, in my view, was that the 30,000 people who were hanged in the summer of 1988 were all tried in show trials on the basis of the reactionary and suppressive laws of the Khomeini regime. They were sentenced to various prison terms. Some of them were executed.

A large number of them had received various sentences. Some of these prisoners were even arrested during the political phase but since they had refused to commit to avoiding political activities after their potential release, they were kept in prison.

After the regime opened fire on protesters and started arrests and torture of the people, these prisoners were tried and sentenced. Over the past 33 years, two things have really upset me regarding the 1988 massacre.

These things have become nightmares for me and have always haunted me. As long as these two things have not been resolved and those who ordered and executed this crime have not been brought to justice, I will not experience calm.

The purposes of the massacre

During the period that I was in that cell, I found out that the imprisoned (PMOI / MEK Iran) sisters from Kermanshah had been transferred to Gohardasht Prison.

We later discovered that this was done for the purposes of the massacre. The other issue that I want to point out is regarding one of my own cellmates, named Mohsen Mohammad Baqer. He was born disabled from the waist down.

He wore special shoes with braces that went up to his waist, and he walked with the help of two crutches. In the prison, we affectionately referred to him as the “Iron Man.”Mohsen Mohammad Baqer was a (PMOI / MEK Iran) member who really loved the organization, his people, and his freedom.

Full of love and joy for his cellmates

He was enthusiastic, happy, and full of energy. Wherever he was, the people around him would become full of rebellion and energy. He used to make everyone happy and excited.

He had values and was full of love and joy for his cellmates, and his high spirit was truly contagious. Even though I had been witness to many crimes committed by this regime, but I still thought that the regime would spare people like Mohsen Mohammad Baqer or Nasser Mansouri from execution.

So, I went to Mohsen Mohammad Baqer and started to talk to him. I told him if you are freed and goes outside, please relay to the (PMOI / MEK Iran) the information about the attack on my house and the martyrdom of my brother.

Henchman and criminal Raisi and the Death Committee

But, sadly, I later found out that the henchman and criminal Raisi and the Death Committee did not spare Mohsen Mohammad Baqer who was disabled from birth. He was executed in that condition.

We also communicated with the floor below, which contained male prisoners from Kermanshah who were transferred there.

We communicated through the pipes with two or three of the Marxists there, who said that all the members and supporters of the (PMOI / MEK Iran) were taken to the Death Committee, and only one of them returned; everyone else was executed.

I also want to mention Gholamreza Kia Koushiri and Mohsen Ghanimati who survived the execution but when they found out that everyone else was executed, they knocked on the cell door and insisted to prison authorities their commitment to the (PMOI / MEK Iran).

They were executed. So, in summary, I hope that one day soon we can bring all the criminals who ordered and implemented this horrific crime and genocide, this war crime against humanity, to justice with the help of the international community, and avenge the blood that was shed.

And I hope that we can bring freedom to our people and prosperity to our country. We hope for that day and wish you all the best.