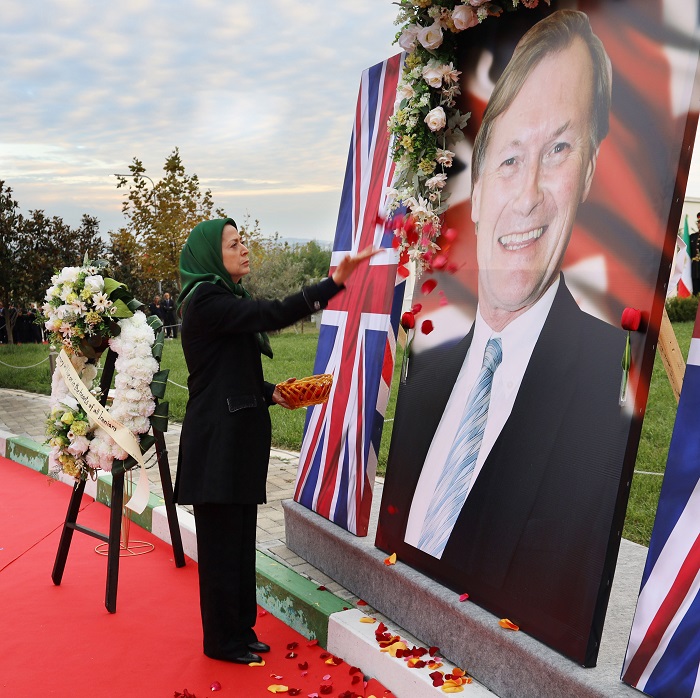 Thousands of members of the People’s Mojahedin of Iran (PMOI / MEK Iran) gathered in Ashraf 3, Albania, on Sunday for a memorial to Sir David Amess, a British MP and great friend of the Iranian people, who was assassinated last week while holding a meeting with his constituency in Leigh-on-Sea, Essex.

Mrs. Maryam Rajavi, the president-elect of the National Council of Resistance of Iran (NCRI), spoke during the ceremony and expressed her condolences to Sir David’s family and his relatives.

Mrs. Rajavi said, “We have not gathered here simply to mourn Sir David’s death.” “We’re also here to honor his life and accomplishments.” I am convinced that he has now joined all others who have given their lives in the name of human rights, democracy, and justice, for which he was an unwavering advocate.”

Sir David as an enemy of dictatorships

Mrs. Rajavi hailed Sir David as “an enemy of dictatorships, particularly the mullah’s dictatorship,” emphasizing that he is now among the martyrs of freedom after three decades of support for the Iranian Resistance.

“Much can be said about Sir David’s character, his kindness, compassion, big heart, moral integrity, principles, and values.”  Mrs. Rajavi expressed her thoughts.  “In victory or defeat, in good times and bad, he would always smile and tell everyone around him to persevere. Our Resistance movement owes a huge debt of gratitude to Sir David.”

Sir David was instrumental in several of the Iranian Resistance’s accomplishments. In 2007, he joined 34 of his parliamentary colleagues in successfully challenging the UK government’s politically driven prescription of the MEK in order to appease the Iranian authorities. In Iraq, he also fought tirelessly to secure the safety and security of MEK members in the camps of Ashraf and Liberty. He also played an important role in the safe transfer of MEK members from Iraq to Albania and other European countries.

Sir David was a frequent speaker at Iranian rallies

Sir David was a frequent speaker at Iranian Resistance rallies and co-chair of the British Committee for Iran Freedom (BCFIF).

“We believe the missing piece in our policy is disregarding the objective conditions in Iran, and the yearning of the Iranian people for freedom and democracy,” Sir David Amess said in his final speech to the 2021 Free Iran Gathering.

Sir David wrote an article for Townhall on the eve of his assassination, highlighting the Iranian regime’s President Ebrahim Raisi’s role in the 1988 massacre of political prisoners in Iran and supporting the call by the Anglo-Iranian community to detain him if he attended the COP26 climate change conference in Glasgow in November.

On September 6, Sir David announced, “One of the proudest things I have ever done in my political career is to support the National Council of Resistance of Iran, which calls for the Iranian regime to be replaced with a safer and more democratic government.”