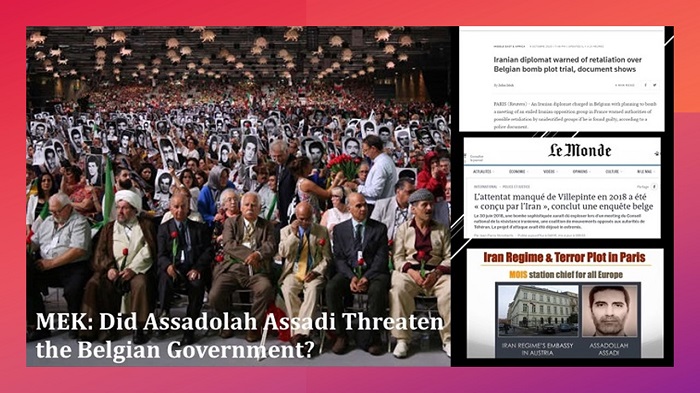 An Iranian regime diplomat that was involved with the plotting of a foiled terrorist attack that was due to happen in 2018 is soon going to be on trial in Belgium. The Iranian regime is concerned about what will be revealed during the trial and is worried about the outcome.

During the past two months, the international media has widely covered the Iranian Resistance’s,  the National Council of Resistance of Iran’s (NCRI), and the People’s Mojahedin Organization of Iran (PMOI / MEK Iran), activities. Also, many of the international media like Le Monde and the Reuters reported the nearing trial of the Iranian regime’s terrorist-diplomat, Assadollah Assadi, in Belgium, and that if convicted the surrounding areas may experience terrorist attacks.

The Director-General of Europe in Iran’s Foreign Ministry, Peyman Sadat, spoke to the official ISNA news agency earlier this week, saying that during a meeting with the Belgian Ambassador he emphasized that the (PMOI / MEK Iran), is trying to “tarnish” the relationship between Iran and European countries.

He ironically also spoke about human rights, saying that this terrorist diplomat was arrested “in a highly humane manner” and that he was “subjected to physical examination” after every visit. This terrorist diplomat had arranged for two individuals to bomb the Iranian Resistance, the National Council of Resistance of Iran (NCRI) and the People’s Mojahedin Organization of Iran (PMOI / MEK Iran), Free Iran gathering just outside Paris in June 2018 – an event that is attended by more than 100,000 people, including hundreds of foreign politicians, lawmakers, religious figures, and other dignitaries from all over the world including the United States, Canada, and many European countries.

Assadi was arrested after he delivered a TAPT explosive to a terrorist couple who were to carry out the attack.

The Legal Director-General of the regime’s Ministry of Foreign Affairs Behzad Saberi said that the arrest of the diplomat was “very bitter for us”. What was bitter for the regime is that it failed in its attack and then got caught.

For many years, the Iranian regime has targeted the People’s Mojahedin Organization of Iran (PMOI / MEK Iran) and the National Council of Resistance of Iran (NCRI). It used to say that the opposition was not a major threat to its existence, but it clearly always has been hence some of the most horrific crimes against humanity such as the 1988 Massacre in which the regime killed more than 30,000 political prisoners – most of whom were members or supporters of the (PMOI / MEK Iran).

Since his arrest, Assadi has been warning, or perhaps threatening is a better description, Belgian authorities that armed groups in several countries including Syria, Yemen, Lebanon, and Iraq are “watching from the sidelines” to see what side Belgium will choose to be on.

The trial is due to start on 27th November and it is encouraging for the people of Iran and the Iranian Resistance, (NCRI), and (PMOI / MEK Iran) that European authorities are taking action and not turning a blind eye to the regime’s terrorism this time. Although it is just one terrorist that is going to be on trial, the links between him and the Iranian state have been made. Earlier this year, the head of the Belgian intelligence services told the federal prosecutor that the attempted terrorist attack was “conceived in the name of Iran and under its leadership”. He made it clear that this was not an attack planned by a lone terrorist.

The communications between Iranian diplomat Asadollah Asadi and counterparts in #Iran were described as text messages, or chats, that have been collected by European intelligence services. #IranStateSponsorTerrorismhttps://t.co/qKFYhcP5N4 pic.twitter.com/gIQfR9iB8E

The Iranian Resistance, (NCRI), and (PMOI / MEK Iran) hopes that the EU will put an end to all appeasement policies towards Iran and take firm action against its belligerence.