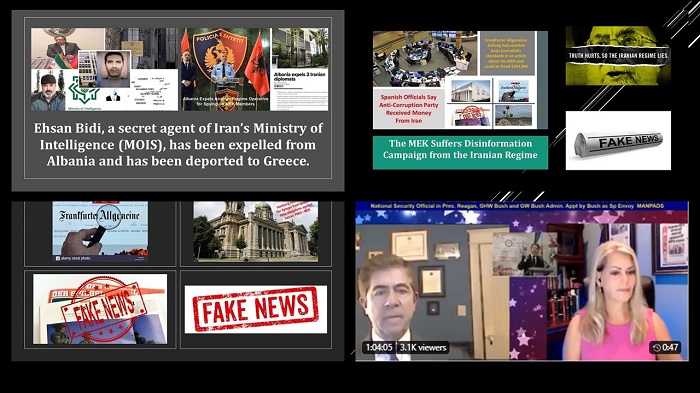 The regime’s disinformation campaigns are enormous and they are used to influence foreign policies towards Iran from abroad.

Ambassador Lincoln Bloomfield emphasized the role of the #NCRI and #MEK in working to ensure that the people of #Iran will one day soon be free from the rule of the mullahs. #1988Massacre #IranRegimeChange #coronavirus @USAdarFarsi #FreeIran2020https://t.co/tEucvrxhHi pic.twitter.com/l5pLbtcohs

The opposition to the Iranian regime – the National Council of Resistance of Iran (NCRI) and the People’s Mojahedin Organization of Iran (PMOI / MEK Iran) – have been warning the international community about the regime’s tactics, but very little attention has been paid to the issue; although it is slowly changing.

The Iranian regime, when speaking about the opposition, often describes the MEK as a terrorist organization. It is true that the organization was once erroneously listed as a terrorist group, but it has long been established that this was an incorrect classification.

Indeed, former Assistant Secretary of State in the United States, Ambassador Lincoln Bloomfield, has looked into the allegations in great detail to see if there was a shred of truth behind them. He detailed his findings in a book completely debunking all of the regime’s vicious allegations. However, Ambassador Bloomfield has said that, despite the findings, Western media is still repeating false allegations.

The regime is of course delighted by this. It uses operatives posing as independent experts to spread its propaganda. The regime has even used government operatives to pose as former members of the MEK.

The regime targets the MEK because it is such a threat to its existence. It is desperate to infiltrate the MEK’s headquarters in Albania – a compound known as Ashraf 3. Members of the MEK that were released from Camp Ashraf in Iraq following persistent attacks by the Iranian regime were moved to several countries, in particular Albania.

Former US deputy assistant to the Secretary of State, Ambassador Lincoln Bloomfield,speaking at the #FreeIran2020 summit last month, recalled that #PMOI #MEK #Iran was once unjustly blacklisted which led to years of prejudice.https://t.co/jwrp4piOjR #IranRegimeChange @USAdarFarsi pic.twitter.com/x7mCWj3ZJS

The regime has gone as far as to set up the “Nejat Society” that claims it reunites Iranians with their family members in Ashraf 3. Of course, this is a completely bogus claim – the regime is just trying to get into Ashraf 3. It does not want to reunite families, as we can easily understand when we consider the Iranians that were executed for visiting family members in Ashraf 3.

One of the problems is that major European publications have been publishing lies about the Iranian Resistance, including the Frankfurter Algemeiner newspaper and the Der Spiegel publication. These two publications were taken to court and they were ordered to remove false claims about the MEK. Although it is great news that they were told to remove false information, it should not have been there in the first place. And also, the damage was already done by the time the courts announced their verdict.

It was quite fortunate for #MEK that a #Hamburg Court ordered the #German newspaper #Frankfurter #Allgemeine to remove false allegations contained in one of its articles about the #PMOI #Iran https://t.co/fKNtWAgIMS #IRGCTerrorWithoutBorders #Iranian #FreeIran2020 @USAdarFarsi

It is the responsibility of the international community, in particular all news publications, to be responsibly informed and to stop repeating the lies the regime spreads.