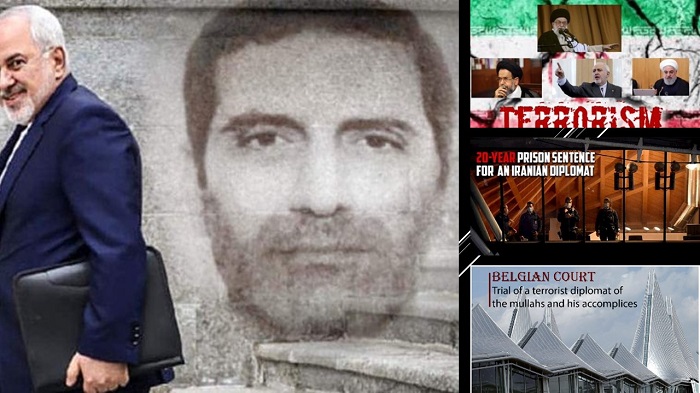 The Deutsche Welle has reported that the German Federal Criminal Court (BKA) is looking into activities carried out by Assadollah Assadi. It was instructed by the German Attorney General to carry out an investigation.

Assadollah Assadi is the Iranian regime’s terrorist diplomat that was put on trial in Belgium in November last year along with several accomplices. He was charged with plotting to bomb the Iranian Resistance, The  People’s Mojahedin Organization of Iran (PMOI / MEK Iran), and the National Council of Resistance of Iran (NCRI)’s Free Iran gathering just outside Paris in June of 2018.

He was arrested after European intelligence forces that were working together foiled the terrorist plot. He was arrested by police in Germany before he re-entered Austria where he was the third secretary at the Iranian regime’s Viennese embassy. German agents found documents implicating him in the plot, including evidence of his actions, his travels, and funds transferred to Iranians.

The ledger found was coded, and another detailed payment of thousands of euros with receipts. The German Federal Crime Agency and Intelligence agencies are now looking into the possibility of a major spy ring operating on European soil.

One of the notebooks with crucial evidence discovered by German agents indicates that Assadi made at least 144 trips to Germany, leading to suspicions that he went there to meet with other members of his network. Several other countries have been implicated in the network, including Austria, Belgium, Czech Republic, France, Hungary, Italy, and the Netherlands.

One of the notes leads to the Hamburg Islamic Center that German intelligence believe is used by the Iranian regime to “export revolution”. Other tourist attractions in numerous other cities are referred to.

All evidence points to the Iranian regime using its diplomats in Europe to plot terror attacks and to carry out spy operations.

This is what the People’s Mojahedin Organization of Iran (PMOI / MEK Iran) and the National Council of Resistance of Iran (NCRI) have been warning about for years. Thankfully now more attention is being paid to the regime’s terrorist and belligerent activities, but it must be followed up by firm action and serious consequences.

Unfortunately, it has got to the stage that the regime has been able to operate such large networks across Europe because of the European Union’s reluctance to investigate and deter Iran. This is a direct consequence of years of appeasement and turning a blind eye.

Thankfully the European intelligence forces were able to work together and foil the terrorist attack before any serious damage was done. Had the plot gone ahead, there could have been thousands of deaths or casualties, including that of some high-profile political figures and dignitaries from both sides of the Atlantic that were in attendance.

One step that must be taken is the closure of the regime’s embassies in Europe as well as its cultural centers that serve as bases for operations. All Iranian officials should be banned from traveling freely in Europe. This would be a clear message to the regime that its terrorism will not be ignored. There is no place for appeasement.