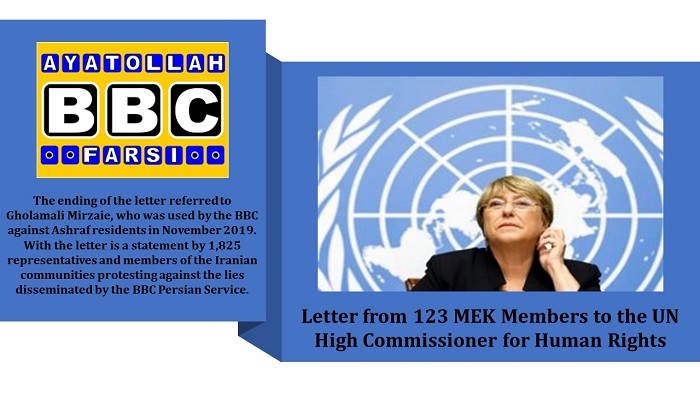 This is an abridged version of the letter written by 123 The People’s Mojahedin Organization of Iran (PMOI / MEK Iran), members (former POWs) to the UN High Commissioner for Human Rights in relation to the ongoing defaming by the BBC Persian Service quoting MOIS agents, and inviting the UN Special Rapporteur to visit Ashraf-3.

The letter describes the ongoing harassment and psychological torture inflicted by the religious fascists that rule Iran and its intelligence services and media against the MEK and its families. The letter is urging the high commissioner to assign Mr. Javid Rahman, or another suitable representative, to meet the MEK in its residence in Ashraf-3 in Albania.

The letter states that many MEK members were, in the 1980s, POWs during the Iran-Iraq war. When the war came to an end they decided to freely join the National Liberation Army of Iran / The People’s Mojahedin Organization of Iran (PMOI / MEK Iran). The letter says the International Committee for the Red Cross (ICRC) used to meet the group regularly.

However, after the 2003 war in Iraq, the letter says that agents from the US and officers investigated the Ashraf camp over a 16 month period until July 2004 and eventually recognized their status as protected persons under the 4th Geneva Convention and signed separate, personal agreements with them. (This information can be accessed in Attachments no 2 & 3).

A report by Colonel Phillips who was designated as the commander responsible for Ashraf’s protection at that time described what he observed at Ashraf, “which is registered in the US Congressional Record dated June 21, 2005 (Attachment no 4).’’

The last time Ashraf residents were interviewed, in a place which was separate from that of the MEK was by US officers in July 2005, which assured them that the path taken in Ashraf was chosen freely.

The letter states that a thank-you letter that was signed on June 25, 2004, by Major General Brandenburg and addressed to Ms. Parsai, Ashraf’s commander, is attached. (Attachment no 5). Before this took place, the ICRC had written to the National Council of Resistance of Iran (NCRI) on June 10, 2005, stating that they no longer saw Ashraf residents as POWs (see Attachment no 6). After this, US officers handed out copies of General Brandenburg’s letter to the PMOI Secretary-General signed on October 7, 2005, stating the rights of all Ashraf’s residents.

The letter goes on to say that the Iraqi Human Rights Ministry did finger-printing and conducted interviewing sessions with the Ashraf members throughout two months from February 26, 2009, up to April 22, 2009, supervised by American officers and the ICRC to ensure that the Ashraf residents had freely and had the right knowledge to join the NLA/PMOI. The letter emphasizes the pressure and repression from the mullahs who rule Iran, which included seven attacks on the camps Ashraf and Liberty, and rocket attacks were continuous.

The letter says the group endured ongoing psychological torture by 320 loudspeakers throughout 22 months from February 2010 to December 2011, where there were threats to kill or burn them.

Being in Albania was not safe from the mullahs’ regime, as it plotted to bomb New Year festivities in March 2018, which was withdrawn at the last minute. Albanian Prime Minister Mr. Edi Rama announced this aborted attempt on April 19, 2018.

#‌Iran Regime's Desperate Conspiracies Against #PMOI/#MEK in #Albania
The clerical regime’s Ministry of Intelligence and its agents in the regime’s embassy in Albania are working under the cover of cultural activities in #Tehran and #Tirana through… https://t.co/vfSRNYkuON pic.twitter.com/TVxGJVWCyB

The letter also refers to the regime’s propaganda, its demonization campaign, and its terror plots against the MEK/PMOI. Last April, even though Covid-19 was spreading throughout Iran, the regime compiled a petition of 11,000 people pretending they were MEK/PMOI relatives in Tehran. It also told the Albanian Prime Minister that MEK members in Albania were being kept against their will.

BBC Persian Services is notorious among the Iranian people because of its biased reporting in the past 4 decades, which explains why Iranians call it "#AyatollahBBC". Gholamali Mirzaie was used by BBC against us previously in Nov 2019, in which we protested against. pic.twitter.com/FBRrmtJASD

The ending of the letter referred to Gholamali Mirzaie, who was used by the BBC against Ashraf residents in November 2019. With the letter is a statement by 1,825 representatives and members of the Iranian communities protesting against the lies disseminated by the BBC Persian Service.