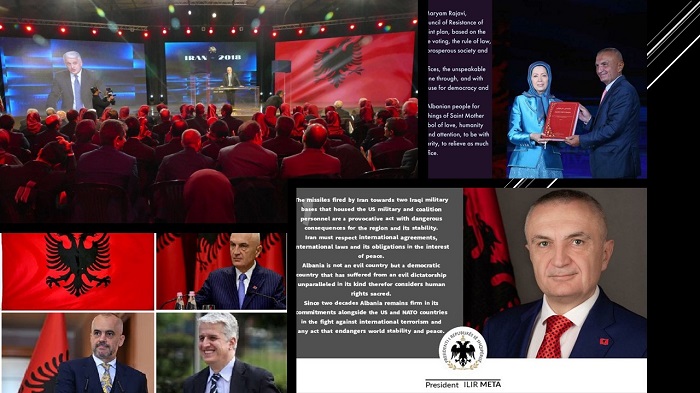 Just before the United Nations began its General Assembly, the National Council of Resistance of Iran (NCRI) organized a Trans-Atlantic Summit on Iran. Iranians from around the world participated, as did many foreign personalities. These included bipartisan politicians from across the political divide in the U.S., U.K., and European politicians.

The keynote speaker at the summit was the NCRI’’s president-elect, Mrs. Maryam Rajavi. She paid tribute to executed champion Iranian wrestler, Navid Afkari, and implored the General Assembly to take the lack of human rights in Iran seriously and restore sanctions against the mullahs’ regime. ‘Khamenei will continue to ravage the nation as his regime’s survival depends on murder and suppression. If Khamenei were to stop executions, he would lose control of the situation, and uprisings simmering in the depths of Iranian society would erupt and overthrow the mullahs’ religious fascism,” she said.

Also reiterated frequently at the summit was a call to bring the perpetrators of the 1988 massacre of 30,000 political prisoners most of the members and supporters of the People’s Mujahedin of Iran (PMOI / MEK Iran), in Iran to justice.

Speakers urged the government representatives at the U.N. to halt the policy of appeasement towards the regime in Iran and demand that those who took part in the executions to be taken to the international court for their role in the massacre.

The former prime minister of Albania, Pandeli Majko, spoke at the summit. His speech will be given below, but before he continued he emphasized that the MEK and Mrs. Rajavi as the leader of the opposition, are the face of the future in Iran.

#DisbandIRGC
Iran is a state in expansion, paying for armed forces. It is a major geopolitical factor working towards a radical division between East & West, it is turning ME into an unprecedented battlefield but with soldiers without official uniforms https://t.co/oRALGpgOLE

“Dear friends, I will try to do some short remarks because I don’t want to repeat my colleagues. But I think that it is very important, this kind of discussion about Iran in international relations. This is a crucial issue.

Iran has become a state in expansion. The armed forces paid for by Iran have been placed in a wider area than this country has in its to date. Iran is the major geopolitical factor working towards a radical division between East and West. This division is completing. It is turning the Middle East into an unprecedented battlefield with soldiers without official uniforms. This wartime volunteers are becoming role models for other countries as well. The aggravated economic situation in Iran could have serious consequences for inciting extreme actions by the regime. The Middle East is turning into a military and humanitarian challenge. Iran’s status today is reminiscent of Japan’s status in the League of Nations before World War II. In this situation, the United Nations should be cautious and prepared.

There is no other alternative than strengthening the NATO alliance. The Balkans are feeling the pressure of the so-called Cold War between Greece and Turkey. It is clear that any vacuum left by the West will be filled by Iran in the name of so-called Eastern policy. I do not want to think that the West may face an Eastern alliance in the future. This would strengthen the status of official Tehran in the Middle East.

In this crisis situation, cooperation with peace partners in the region is of fundamental importance. the People’s Mujahedin of Iran (PMOI / MEK Iran) and Madame Rajavi, the woman of peace, are the alternative for a lasting peace between the East and the West. In the future, they may turn into an alternative for internal dialogue in Iranian society.

Their survival keeps hope not only for freedom in Iran but also for the relationship between East and West. Albania has given shelter to the Mojahedin (PMOI / MEK Iran) opposition that was endangered in the Camp Ashraf in Iraq. We have helped MEK, but we have also helped ourselves. We are honored to have been considered a second home for the opposition (PMOI / MEK Iran), of Iran.”