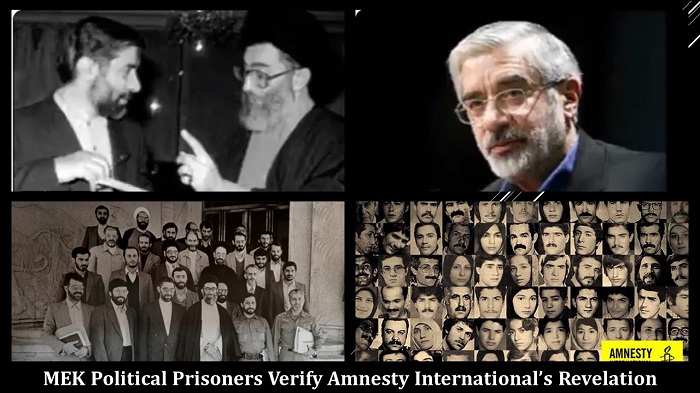 The Iranian regime’s agents will not stop at anything. They are now attacking Amnesty International’s report for highlighting the 1988 massacre of political prisoners in Iran. Most of them were members and supporters of the People’s Mojahedin Organization of Iran (PMOI / MEK Iran).

Iraj Mesdaghi, who is an infiltrator and intelligence agent, suddenly started to express his opinions after being exposed to the report. His message was that Amnesty International cannot be forgiven for revealing the identities of the martyrs of the 1988 massacre who were arrested and killed just on the basis of their political beliefs and political activism. He is also eager to know why then-Iranian prime minister, Mir Hossein Mousavi, was given as one of those responsible.

It has taken since 1988 for an organization like Amnesty International to even consider the ‘’ongoing crimes against humanity.’’ This only happened because of the brave activism of MEK members and especially Maryam Rajavi, the President-elect of the National Council of Resistance of Iran (NCRI). Throughout the past 32 years, Amnesty International has sought to get justice for those who died.

Recently, 84 former political prisoners and (PMOI / MEK Iran) members have compiled a statement that supports Amnesty International in calling governments who have continually emphasized supporting human rights to no longer be silent but condemn the regime for their deadly actions. This is not the time to sit on the fence and listen to the regime’s condemnation of the justice movement. It is time to seek justice for those who ordered the massacre.

The MEK members have also said that the regime’s leaders must face justice for this deadly 1988 massacre and all the other terrorist and deadly crimes they have committed over the last 4 decades at least.  This should include the crackdown ordered on the November 2019 when 1,500 peaceful protesters took to the streets demanding an end to the current regime but instead they were killed by security forces, and executions took place of political prisoners, such as Mostafa Salehi and Navid Afkari.

Iranians are resisting the #Iranian regime’s attempt to repress them after the emotional executions of two political prisoners, Navid Afkari and Mostafa Salehi. Family members, friends, and others who knew them have gathered at Navid Afkari’s graveside in his memory. #MEK #Iran pic.twitter.com/WvqwUcUHMk

“Any political prisoner who witnessed the 1988 massacre and is members and supporters of the  People’s Mojahedin Organization of Iran (PMOI / MEK Iran) have made a promise to the 30,000 martyrs who died that they will never stop making every effort they can make name those who were responsible for the 1988 massacre and ensure the perpetrators get the justice they deserve,” MEK activists wrote in their statement.

Also, MEK activists explained that Amnesty International is supported by political prisoners, the martyrs’ families, and all Iranians who are tirelessly fighting to reveal the truth about this vicious crime. They said that the attacks on Amnesty International and its researchers cannot be forgiven and the world should not tolerate this type of treatment.

They wrote that “We consider it to be the urgent obligation of all political prisoners and any dignified human being to expose anyone, whether a former prisoner or otherwise, with any political claim, who serves the interests of the clerical regime, and we condemn any silence with respect to such abhorrent actions.’’