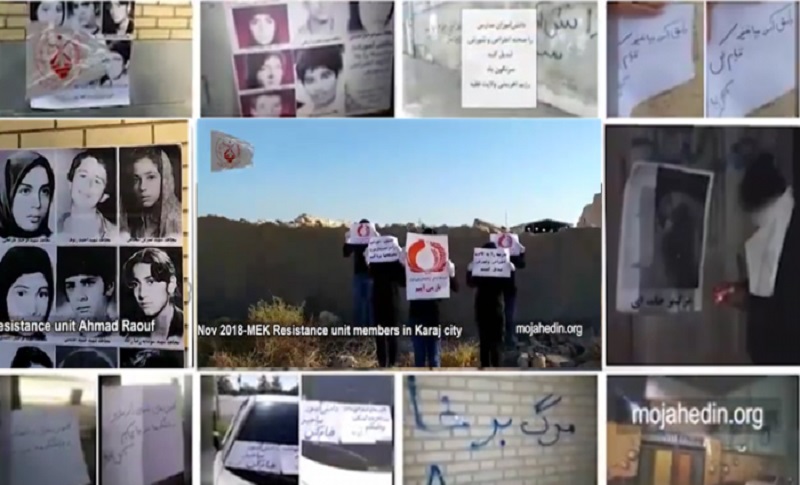 The members and supporters of the Iranian opposition People’s Mojahedin Organization of Iran (PMOI/MEK-Iran), especially those within its Resistance Units, are stepping up their campaigns in various cities across Iran, despite the brutal crackdown launched by the mullahs.

These brave people are becoming symbols of perseverance and persistence in the fight for freedom in Iran, providing hope to a nation that wants to live in the light of democracy as opposed to the darkness that is the mullahs’ repressive regime.

In Tehran, the members of the resistance units hung a large poster of Iranian Resistance leader Massoud Rajavi from two separate pedestrian bridges, each bearing the message, “Down with dictatorship; Down with reactionism; Hail to Rajavi”.

While resistance units members at the pedestrian bridge of the Azadegan highway, also in Tehran, hung up a massive poster of Iranian opposition President Maryam Rajavi, who is head of the National Council of Resistance of Iran (NCRI), which contained the message, “With Maryam Rajavi, we can and we must build a new Iran”.

At yet another pedestrian bridge in the capital, members of the resistance units put up another Maryam Rajavi poster with the line, “Down with dictatorship; Down with reactionism; Viva freedom”.

In Mashhad, which is a large city in northeast Iran, the resistance unit’s members hung an image of Massoud Rajavi up in a residential area. The image was accompanied by the message “Down with dictatorship; Down with reactionism; Viva freedom; Hail to Rajavi”.

While in Kashan, which is a city in central Iran, resistance unit’s members put an image of Massoud Rajavi with lines that read, “Hail to Rajavi; Viva freedom”.

It is important to remember that these are brave acts in Iran. Unlike in the West, where vocal support or hatred of politicians is protected under free speech, the members of the resistance units are risking their lives.

Under Iranian law, it is a crime to support the MEK or criticize the regime, although the mullahs always dress it up with a national security offense; something that they commonly use to charge political prisoners.

In fact, in June 2014, MEK supporter Gholamreza Khosravi was arrested and executed for the ‘crime’ of sending a small financial donation to a satellite TV network affiliated to the MEK.