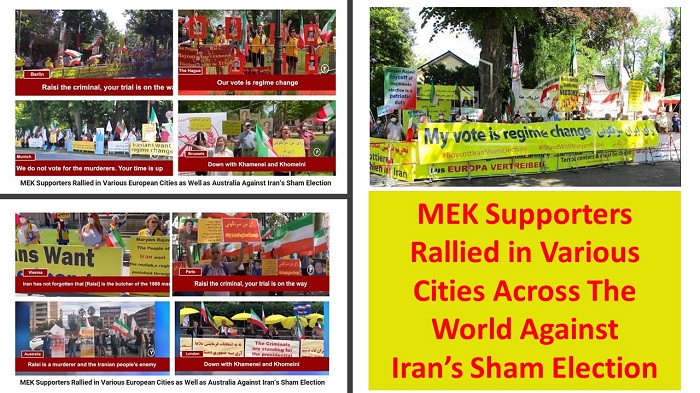 The National Council of Resistance of Iran (NCRI), and the People’s Mujahedin of Iran (PMOI / MEK Iran), reported that Iranian supporters of the regime change held rallies in European Cities (Berlin, Munich, Paris, Hague, Vienna, London, Brussels) and in Australia against the dictatorship in Iran.

The MEK supporters chanted slogans against the mullahs regime candidates for the sham presidential election in Iran.

They called for regime change and the establishment of freedom, democracy, and human rights under Maryam Rajavi‘s ten-point plan for a Free Iran.

Iranian supporters of the regime change

MEK supporters rally in The Hague

On Sunday, supporters of the MEK and the Iranian Resistance held rallies in major European capitals and cities, including London, Cologne, Vienna, Oslo, Geneva, and elsewhere, during which they called on the international community to put an end to all dealings with, and appeasement of a regime whose president is one of the worst criminals against humanity in modern times.