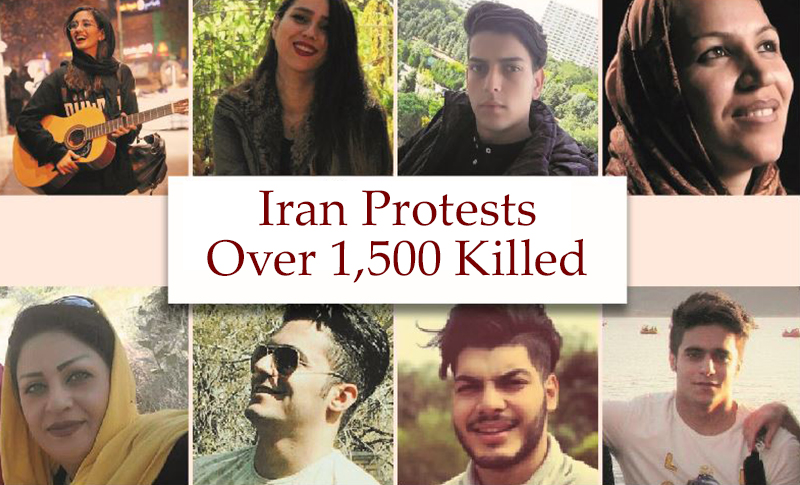 At least four large public uprisings against the regime’s fragile extremist authority have rocked the regime since 2017. Tehran carried out a street bloodbath in November 2019, killing at least 1,500 demonstrators.

Reuters confirmed the killing of 1,500

Authorities at the time, frightened by the organized character of the protests, blamed the main opposition, The National Council of Resistance of Iran (NCRI), and the People’s Mujahedin of Iran (PMOI / MEK Iran).

Concerned by the demonstrations, Supreme Leader Ali Khamenei and his private army, the Islamic Revolutionary Guard Corps (IRGC), appear to have chosen to consolidate power and prepare to crush any future uprisings.

They elected Ebrahim Raisi as president in June. Raisi, who is condemned in Iran for his role in the 1988 massacre of over 30,000 political prisoners, most of them were MEK activists, has installed brutal officials, corrupt operatives, and terrorist masterminds in key government positions.

Meanwhile, the opposition has increased and broadened the scope of its already enormous campaign to destabilize the regime inside Iran. The People’s Mujahedin of Iran (PMOI / MEK Iran), networks inside Iran formed thousands of MEK Resistance Units.

The opposition turned 57 years old this week. It also hosted a grand event to commemorate its foundation. Thousands of its members gathered in Ashraf-3 (Albania), Berlin, Paris, London, and other major cities for an outstanding biennial session.

The Iranian oppositional group is largely headed by women, which is unusual for a Middle Eastern political entity. The Central Council is made up of 1,000 women, with a third of them being former political prisoners who have been subjected to inhumane torture by the mullahs and the IRGC.

The vivid televised visuals of women taking charge in the largest opposition movement against the mullahs must be inspiring to many Iranians who have been fed up with four decades of antiquated, misogynist rule by the mullahs.

Indeed, the organization produced scores of recordings from Iranian women who proclaimed they were more motivated and prepared to overthrow the regime now.

The oppositional party’s crucial congress sent a clear message. Raisi, the regime’s mass killer from 1988, has ascended to power, but his totalitarian policy will fail.

“The clerical regime engaged in relentless suppression and massacre as well as a continuing campaign of demonization in the past four decades in an attempt to destroy this movement,” said Maryam Rajavi, an Iranian opposition leader who attended the ceremony as a guest.

But it failed, and the MEK has created a state-wide Resistance, unwavering and committed to its values, more prepared and stronger than ever.”

The opposition appears to be more adamant and hopeful about the theocracy’s demise. The regime’s egregious mismanagement of the economy and social problems has sparked a strong undercurrent of popular anger.

As of 16 September, over 421,600 have died due to Covid-19, according to the Iranian opposition, The National Council of Resistance of Iran (NCRI), and the People’s Mujahedin of Iran (PMOI / MEK Iran).

The economy is on the point of collapsing

The economy is on the point of collapsing, and the corrupt fundamentalist theocracy is powerless to prevent it.

In these circumstances, more Iranians are looking to the opposition as the sole realistic democratic choice for establishing a free, democratic, and secular government in the future, with women playing a key role.

This potential will not only change Iran’s political landscape but will also help a region endangered by the rise of misogynist and fundamentalist forces.