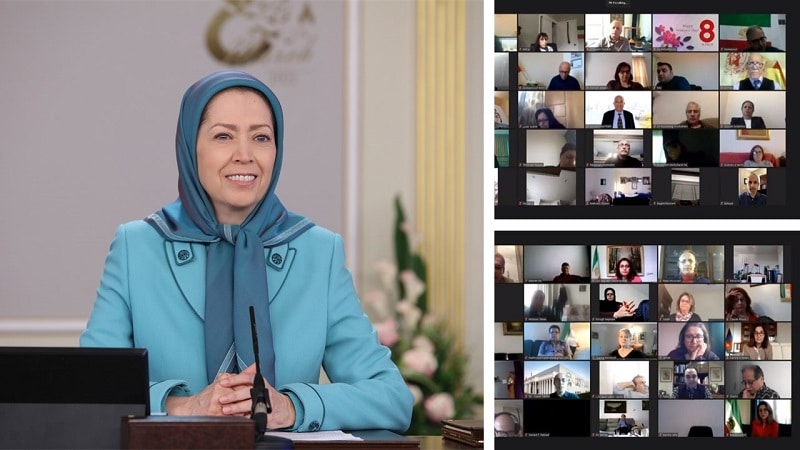 The fate of Iranian women in their fight for democracy and equal rights was addressed on March 8 in a global online conference co-hosted by the Women’s Committee of the Iranian opposition National Council of Resistance of Iran (NCRI), The International Committee for a Democratic Iran, and the British Committee for Iran Freedom to celebrate International Women’s Day.

The event featured speeches by politicians, women’s rights activists, and members of the Iranian opposition.

Mrs. Maryam Rajavi, the NCRI’s president-elect and the event’s keynote said, “The outcome of the significant gender gap in Iran is the imposition of extreme poverty on women and the denial of many of their most basic rights,” “The misogynous regime wants to preserve its rule through repression. However, Iranian women play critical roles in challenging the regime and pushing the situation towards overthrowing the mullahs.”

Madam Rajavi spoke about the importance of women in Iran’s struggle for freedom, particularly in recent protests among the members of the Iranian opposition. “Iranian women have put the responsibility to end the catastrophe caused by the ruling theocracy on their shoulders and are prepared to make it happen.”

Madam Rajavi often emphasized that civil rights and women’s rights must be a core aspect of any policy regarding Iran.

“Efforts to contain and control the regime’s nuclear program will not succeed unless they are coupled with firmness against violations of the human rights of the people of Iran. Call on your governments to make economic and political ties with the criminal mullah regime conditional upon respect for human rights in Iran, especially women and prisoners’ rights.”

Other speakers at the event mirrored calls for a hard-line approach against Iran’s government, one that promotes human and women’s rights.

In her speech, Baroness Eaton, a member of the House of Lords, stated, “The relation with the regime in Iran must be contingent on improvement of human rights conditions and especially women’s rights.

We have to recognize that the NCRI is our ally because peace and stability in the Middle East can only be achieved and maintained when the malign activities of the regime in Iran are stopped, and this can only be achieved by supporting the efforts of the Iranian Resistance to establish freedom in Iran.”

Co-Chairman of the International Committee of Parliamentarians for a Democratic Iran, British Member of Parliament, stated.

“The UK, Europe, and the US need to listen to the people of Iran and apply maximum pressure,” he said. “Supporting the Iranian people and the NCRI to free Iran from the grip of this brutal regime is the only long-term sustainable solution to secure and advance human rights, democracy, and equality in Iran.

This must be the center and the ultimate goal of UK policy on Iran. Women are standing up to the regime to realize the democratic aspirations of the Iranian people, which today, in my view, converges with both the economic and security interests of the UK and Europe at large.”