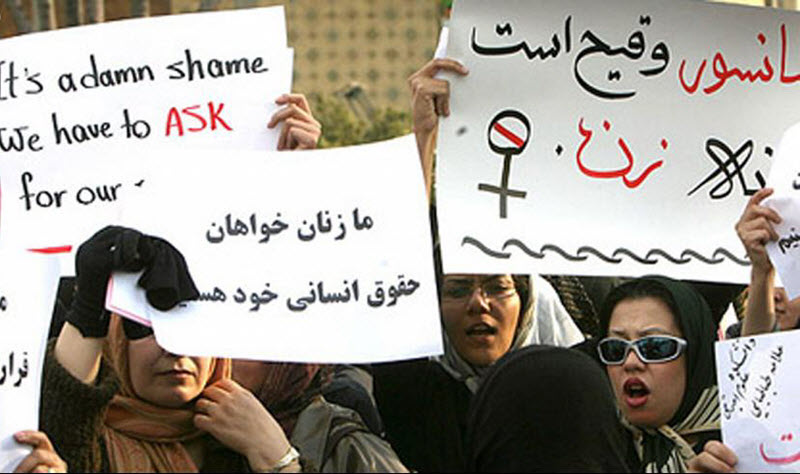 On 8 March, Iran’s misogynist supreme leader, Ayatollah Ali Khamenei, has recently ordered that female cartoon characters wear the hijab. Animated female characters in cartoons are now prohibited from revealing their hair in Iran. The dress code for women is constantly scrutinized. They must wear the hijab, and “morality policy” are on the lookout for offenders. For the “crime” of mal-veiling, women, especially young women, are targeted for brutal attacks.

Nowadays, gender equality in Iran is practically inexistent. Girls who were considered to be inappropriately dressed on the street have been subjected to horrific acid attacks and stabbings, which the mullahs openly accept.

Teenage girls were publicly humiliated after being arrested for sharing images of themselves dancing or singing on social media. Young female students have been fined and beaten for attending end-of-term celebrations.

With the execution of a 23-year-old woman in Ardabil Prison on 22 February, the Iranian regime has now executed at least 113 women during Hassan Rouhani’s presidency. The majority of these women were sentenced to death for murdering an abusive husband or partner.

But this is just another example of how the regime abuses women, who are overwhelmingly victims of domestic violence who kill in self-defense or in defense of their children because they have no legal recourse to end a violent cruel marriage.

These executions often occur after years of humiliation, insults, beatings, and even torture at the hands of abusive husbands from whom they have no right to divorce.

This does not include those that have been executed for offenses that are not considered capital under international law, such as drug offenses, or for non-crimes, such as political activism.

Iran’s theocratic dictatorship has a tradition of oppressing women. The Iranian penal code is structured to allow men to discipline women and young girls who do not follow strict Islamic codes in the theocratic fascist regime.

Iran ranks first in the world in per capita executions, as well as executions of women and juveniles. Since Rouhani took power in 2013, over 4,300 people have been executed, with the total number of executions and those of women estimated to be even higher.

Even before the pandemic brought the economy to a halt, Women made up more than 50% of university students, but discrimination and explicit sexism created barriers to career opportunities, so women account for just 19 percent of Iran’s workforce. Women in the West have gained political, economic, personal, and social equality, while Iran still marginalizes its female population.

Today, Iranian women are leading the opposition to the theocratic regime. Indeed, Maryam Rajavi, the President-elect of the National Council of Resistance of Iran (NCRI), the charismatic leader of the main democratic opposition movement, the People’s Mujahedin of Iran (PMOI / MEK Iran), is a woman.

Brave women are regularly joining their brothers in calling for the regime’s end as well as to the misogyny and oppression that have tormented not only the Iranian people but a significant part of the Middle East for the past four decades.