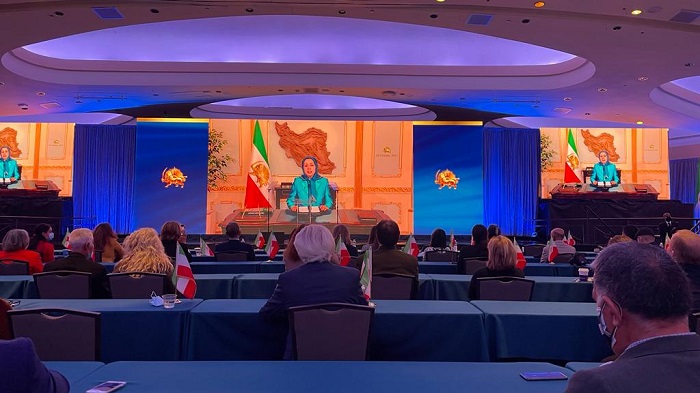 Members of the US foreign policy establishment’s hawkish wing gathered at the Hilton hotel in Washington, DC, for the Free Iran Summit 2021, a meeting held by Iranian dissidents who advocated for a popular revolution against Iran’s government.

Mike Pence was the keynote speaker

The Iranian regime was at its weakest position

In his prepared remarks, the former vice president walked a thin line, emphasizing that, while the Iranian regime was at its weakest position in decades and would face the strongest pressure from the Biden administration, any change to Iran’s government would come through popular means. He also criticized Iran’s newly elected president, Ebrahim Raisi, for his role in the decades-long assassination of thousands of Iranian dissidents.

“The people of Iran must remove Ebrahim Raisi from office, and he must be prosecuted for crimes against humanity and genocide,” Mr. Pence added.

In his address, Mr. Pence spoke about the main Iranian opposition group, the People’s Mojahedin of Iran (PMOI / MEK Iran), and his remarks drew applause from the audience, especially when he mentioned Soleimani’s death.

There is an alternative – the MEK

“One of the biggest lies sold to the world by the ruling regime is that there is no other option than the status quo. “However, there is an alternative – the MEK, which is well-organized, fully prepared, perfectly qualified, and popularly supported,” remarked the former vice president.

Mr. Pence described resistance to plans to withdraw the US from the 2015 Iran nuclear agreement, which the Trump administration withdrew out of in 2018, during a moderated debate with his former chief of staff, Marc Short.

Nearly every major European ally and other international leaders had called the White House pushing former President Donald Trump to stay in the pact, which he eventually declined to do, according to the former vice president.

That remark contrasted sharply with a statement made by White House national security adviser Jake Sherman during a press conference on Air Force One just a few hours later, in which Mr. Sherman claimed that the Biden administration was working in lockstep with European allies and “singing from the same song sheet” on Iran.

In recent years, events held by the National Council of Resistance of Iran (NCRI) have drawn a bipartisan crowd of parliamentarians while also serving as a pit stop for numerous key GOP officials, including Vice President Mike Pence, who is rumored to be mulling a presidential candidacy in 2024. The group has continuously advocated for a tough Iran policy in line with Trump’s methods, including opposition to the 2015 nuclear deal and support for US and international sanctions.

Former Secretary of State Mike Pompeo and Senator Ted Cruz have also appeared at NCRI events this year; on Thursday, Vice President Mike Pence left his keynote address and traveled to Loudoun County, Virginia, for another campaign-style rally on the issue of “educational freedom.”