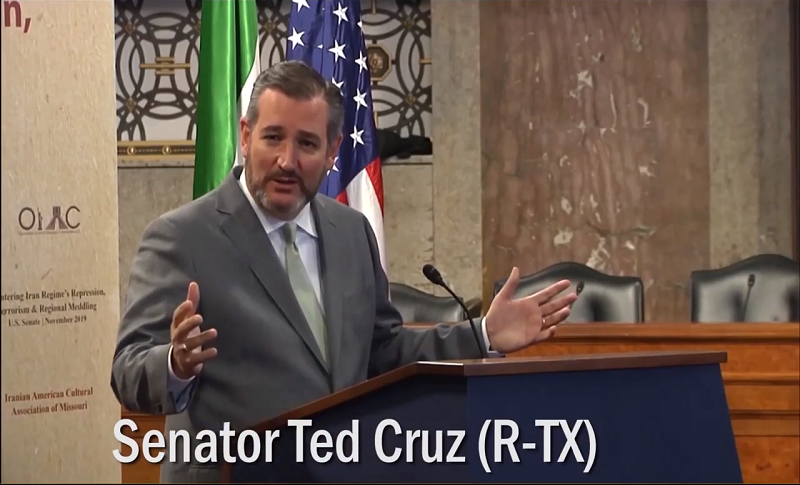 In a congressional briefing at the U.S. Senate on November 6, 2019, senators Ted Cruz and John Boozman expressed their solidarity and support for the Iranian people’s struggle for freedom and democracy.

The briefing was to discuss the rise of domestic suppression and regional aggression by the Iranian regime as anti-regime protests spread in Iran and intensify in Iraq and Lebanon.

“The government of Iran has been under a shroud of darkness for decades now. Ayatollah Khamenei and the mullahs enforce brutal repression on the people. And I will say to the Iranian people, to the men and women of Iran:

America is with you. America is with you and your struggle against cruel, oppressive, torturing, murderous tyrants. Freedom matters. I believe we can one day again have a free Iran, not with the Ayatollah in power,” said Senator Ted Cruz (R-TX), a member of the Senate Foreign Relations Committee.

He continued: “Two things are happening. One, the regime is afraid of its people and this is the word of encouragement that I want to give the men and women here: Dictatorships can seem very, very strong until suddenly they’re not. The Ayatollah and the mullahs are terrified of the people. They’re terrified of the truth. And as they lose the billions that have been funding their repressive regime, they are more and more vulnerable to the people demanding freedom. But secondly, in the process, we’ve seen them lashing out. We’ve seen them carry out acts of war attacking their neighbors, Saudi Arabia, attacking the oil facilities there and doing major damage to their production capability. Unequivocal act of war carried out by Iran, lashing out as the regime is becoming desperate to hold on to power… the Ayatollah and the mullahs are much, much weaker than many believe at the time.”

In reference to the JCPOA international deal of 2015, Senator Cruz said: “The Obama Iranian nuclear deal was the most profoundly fool-hearted foreign policy deal of the modern age, giving billions of dollars to an ayatollah who is laughing and proclaiming his intent to wage war with that money. The government of Iran is the world’s number one and leading state sponsor of terrorism. Those dollars under the Obama Iran nuclear deal went straight to murdering Americans, to murdering American servicemen and women, to murdering innocent civilians, and to murdering our friends and allies,”

“I welcome you being here to talk about the importance of how to move forward and continue the pressure on the regime in Iran,” said Senator John Boozman (R-AR), Chairman of the Senate Appropriations Subcommittee on Military Construction, Veterans Affairs and Related Agencies.

He recognized and praised the “great work of the Iranian community in the state of Arkansas and their effort to raise public awareness on the situation in Iran adding how it is important to make the connection across the United States by sharing the personal stories of Iranian diaspora. “

Our event on Capitol Hill, focussing on Iran’s rights violations and malign activities in the region, attracted many Foreign Affairs staffers. Thanks to all attending. @SenTedCruz @JohnBoozman @Liz_Cheney @GOPLeader We are for a #FreeIran pic.twitter.com/pqAWsPEicZ

“The mullahs have stepped up repression and executions in Iran, and export of terrorism and warmongering in the region. Unfortunately, decades of silence and inaction vis-à-vis the regime’s aggressions had emboldened the mullahs,” emphasized Ms. Soona Samsami, the U.S. representative of the NCRI.

She added that the “moment has now arrived for the elected representatives of the American people to declare their unequivocal support for the Iranian people’s demand to overthrow the clerical regime and to hold its officials accountable for their crimes and terrorism.”

The former U.S. Special Envoy for Nuclear Nonproliferation and Under Secretary for Arms Control and International Security Ambassador Robert Joseph said the people of Iraq and Lebanon “are fed up with the endemic corruption, the repression, and the malfeasance of the Iran-backed political order.”

“MEK’s presence at the center of the NCRI – the opposition’s parliament-in-exile, makes the NCRI a viable and formidable alternative to the mullah’s tyranny. The very existence of this alternative, and its platform of a free, democratic, secular, and non-nuclear Iran, represents an existential threat to the clerical dictatorship that controls the people of Iran through fear and brutality,” added ambassador Robert Joseph.

The People’s Mojahedin Organization of Iran (PMOI), otherwise known as the (Mujahedin-e-Khalq MEK), is Iran’s largest and most organized opposition group.

The mullahs’ regime “has fed its terrorist activities on the backs of the Iranian people and we hope that when next year rolls around this regime will no longer be in a position to engage in the activities that it is engaging,” said Ambassador Marc Ginsberg, a former U.S. Ambassador to Morocco.

He added that the people of Iraq and Lebanon “want to see this regime gone.”

Ambassador Lincoln Bloomfield, a former U.S. Assistant Secretary of State said “we have seen the nationwide protests calling for political change since December 2017. And now we see people taking to the streets in Lebanon and Iraq – in both cases, demanding that they have a constitutional government free from Iranian influence.”

He stressed how the Iranian regime has been considered as the most active state sponsor of terrorism by the U.S. State Department since 1984.

“The Iranian people will be the architects of the next Iranian Revolution,” noted Professor Ivan Sascha Sheehan, director of the graduate programs in Negotiation and Conflict Management and Global Affairs and Human Security in the School of Public and International Affairs at the University of Baltimore.

He added his opinion of the MEK in their new home at Ashraf 3 in Albania as a “cohesive, organized political opposition movement, with a long history of struggle against fundamentalism and dictatorship, guided by gifted female leadership, with a well-defined political platform, and an intricate network of passionate supporters inside Iran and across the world eager to topple the regime from within.”

At another conference organized by the Organization of Iranian-American Communities (OIAC) on October 30, 2019 at the House of Representatives, 110 members of the U.S. Congress from both Democrat and Republican parties have co-sponsored a resolution condemning the Iranian regime’s terrorism in Europe, particularly the terror plots against the main opposition group People’s Mojahedin Organization of Iran (PMOI), or Mujahedin-e-Khalq (MEK).