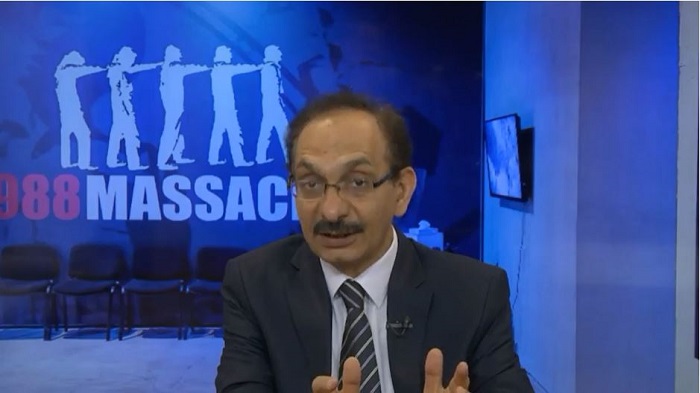 My name is Mahmoud Royaei. I spent 10 years in the prisons of Ghezelhesar, Gohardasht, and Evin. During the massacre, I was at Gohardasht Prison. It was around January at Gohardasht when we noticed some relocations and particular confrontations. These confrontations led to the segregation of prisoners. It was the initial measure for the massacre. At the time, no one was aware. At that time, someone named Davoud Lashkari, who was in charge of the prison’s security, called in the prisoners one by one and asked them their identities, the sentence length, and charge.

We would say that we are charged with supporting the MEK. Anyone who said this would be held. A small few were separated. We did not know what the objective was. In this segregation and categorization, since they also separated other non-MEK and Marxist prisoners, we thought the objective is to categorize prisoners on the basis of the length of the term and the type of the charge.

Bu on the same day, we heard from the open sliver underneath the door that Davoud Lashkari was talking on the phone and saying that “the rotten eggs have been separated.” We realized that there is a project going on and an important measure is being carried out. But for us it wasn’t important because they had imposed so much pressure on us, and it was January and February of 1988, so we thought what else could they do that they haven’t done yet during these past 6 or 7 years.

Then they put everyone in the ward. They categorized various “crimes” in other words. On June 1, they transferred about 150 prisoners from Gohardasht to Evin Prison. They selected the prisoners from various wards, from each ward 10 or 15 or 20. About 150 were taken to Evin. And from Evin those who had already completed their sentences, and were known as “Melli-kesh” were brought over to Gohardasht Prison.

Well, this system of relocations and categorization were the first measures for the massacre. The massacre was triggered in February 1988. At the same time, this type of categorization and transfers were being carried out in a similar way in all other counties. In the counties, they also did something else, which was since they wanted to eradicate prisoners, which was an extraordinary thing to do, and since these towns were small and the news should not spread quickly because it would trigger rebellion, the prisoners were sent to exile in various cities under various pretexts.

In the northern prisons, like Sari and Ghaemshahr, and Babol, the prisoners were relocated. Some from Mashhad were taken to Tehran and other cities. Some from Zahedan were taken to various other cities. So, the relocations had thus started. On March 21, 1988, about 100 prisoners from Kermanshah were relocated to Tehran. They were brought to the ward on the floor below us. We did not know what’s going on.

They had told them that because of the war and missiles and bombings, we are taking you to a safer location. This is while the prisoners were separated to be executed. The prisoners knew. On that day, March 21, five months before the start of the massacre, one of the prisoners who were relocated, named Parviz Mojahed Nia, saw his family when the bus had stopped (on route to Tehran), the family asks where are they taking you, and he had told them that they are taking us all to be executed because they said we are going to seal your fate soon.

This was a series of events that happened in various cities. The way they dealt with the prisoners, relocations, and categorization, I do not want to go into further details now. In many counties, they had told prisoners that we will seal your fate, the Imam has said that we have to come to a final solution about you and we don’t want to have prisoners.

On July 19, the day after the massacre, a number of friends who were serving their sentences were executed. The relocation was being carried out in Evin. A large number were taken to solitary confinement. They were given interrogation and question forms. They did not know at the time, but it was later found out that this was in preparation for the executions.

So, there is absolutely no doubt that the massacre was being prepared and the stage was being set from six months before. I have conducted extensive research about this and published it in a series of books, five volumes called “The Sun Planters.” Also about the statistics about the number of those executed in the massacre.

On the basis of the estimates that I have gathered over the past 30 years, I have personally come to the conclusion that the 30,000 figure that has been declared is very cautious. The reason is that in northern and northwestern cities, in many cities, we do not have any statistics. These were cities where the Intelligence Ministry had strong control over, not just during the massacre, but both before and after it. there, on a nightly basis, the prisoners and people were killed, and no one could complain.

Now that Khomeini had issued a specific decree to execute all those MEK who insisted on their position, these regime authorities were extremely active. From Azerbaijan, Kurdistan, Naqadeh, Salmas, western cities until the south, like Khuzestan, we do not have too much information. We have some names and information from the “UNESCO” Prison and Ahvaz Prison, which relate to the crimes committed by Avai.

But in total, the information about this region is extremely scant. This also includes information about Vakil Abad and Adel Abad prisons, and large prisons like Isfahan, Mashhad, Shiraz, and Rasht. Our statistics about these is extremely scant. From Mashhad Prison, which was a large prison and a large number of executions took place there, we have some names, which shows that in many of the wards in Mashhad there were no survivors to give their accounts. This also happened in other cities, like Qom. One of the friends in Qom who was previously being held in Qom said that there was only one survivor in Qom whose fate is unknown.

So, in some prisons, there were absolutely no survivors to give their testimonies about the events. So, that is why the number of executions are much much higher than we think. Many Iranian researchers, like Dr. Maleki, said at the time that the number are more than 30,000. The Deputy Intelligence Minister at the time, Reza Malek, also gave a specific number, he said 33,700. He said more than 30,000 are related to the MEK. He also gave some statistics about mass graves. So, we can’t know the real figures. Until the regime is overthrown we cannot know.

Another reason why I’m saying it was more than 30,000 is that the issue of the executions in 1988 is the greatest and most significant red line for the regime. Anyone who talked about it would be arrested. The families of victims were banned from saying that their loved ones were executed. If the families held ceremonies and talked about this they would be taken away. They pressured the families.

The father of one of the martyrs, Reza Zand, was subjected to a mock execution because he said he wanted to hold a ceremony. By applying these pressures, the regime prevented the flow of information about the martyrs. In the circumstances where information was so hard to obtain, the MEK gathered the names, identities, and particulars of 5,000 of the 1988 martyrs particularly tied to the MEK. There were also some others affiliated with other groups who were executed starting on August 27.

But the MEK published the names of 5,000 members who were executed during the 1988 massacre. And this 5,000 is indicative of tens of thousands of executed members. Everyone knows that there are many families who are still not talking about it.

Another issue is the reason for the massacre. These people were executed for one reason. They were executed because they defended the ideal and conduct of the MEK, for defending the ideal of freedom. This is what Khomeini did not want. That is why Khomeini explicitly wrote that all those who remain loyal to the PMOI’s stance should be executed.

And when Ardebili asked him what does this means, does it mean those who are sentenced to execution? What about those in counties? Khomeini responded by saying that all prisoners at whatever stage, if they are committed to the MEK, meaning that they accept the ideas of the MEK, at whatever stage, must be executed. Then he said don’t hesitate or have any doubts, and be firm, and conduct more executions.

There are so many instances that I have, dear friends who I personally met, who said that they will not back down from the path and conduct of Massoud Rajavi and the MEK. On August 3, 1988, when Mohammad Reza Shahid Eftekhar found out that they will execute him, he said that the tree of a revolutionary is fed by blood, and what other blood than ours? He considered this as an opportunity.

Many imprisoned sisters and brothers, despite the love they had for life, really loved life, but they chose at this stage to sacrifice themselves for the people. They said that this blood will invigorate a generation, the impact of which we see in the Call for Justice Movement.

There were even some who had other beliefs, but while in prison they began to admire the MEK and started supporting them. Majid Pour Ramezan was asked by Nayyeri, your charge is supporting Arman-e Mostazafin, they have brought you here by mistake. Nayyeri wanted to send him back.

But Majid said no I am a MEK supporter. Majid knew that he would be executed. Then said to him your charge is something else and they wanted to send him back. He said whatever my charge is I am a Mojahed. Then he loudly chanted “Long live the MEK.” Many did the same.

The friends from Mashhad declared themselves as devotees of Massoud on the first day. And these people enthusiastically kissed the noose. Out of this blood, we see today that the Call for Justice Movement has been reinvigorated in all cities.

Today, the generation that was not even born those days are now the flag bearers of this movement and are calling for justice for the blood that was shed.