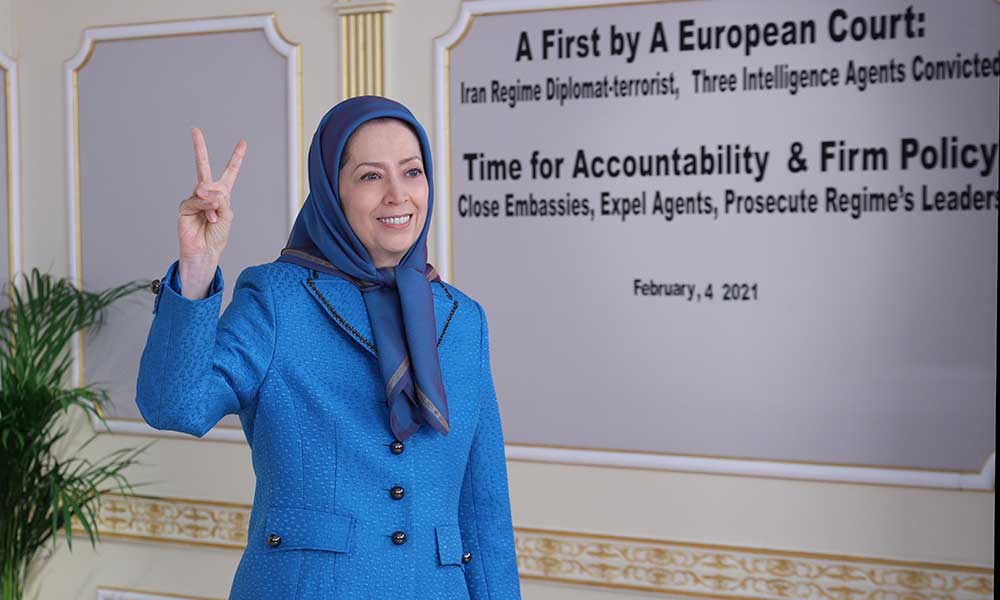 Assadollah Assadi, the Iranian diplomat-cum-terrorist has finally been sentenced by a Belgian court to 20 years in prison. His three accomplices who were to help him and the Iranian regime mount a bomb attack at the Iranian Resistance, the National Council of Resistance of Iran (NCRI), and the People’s Mujahedin of Iran (PMOI / MEK Iran)’s Free Iran rally in June 2018, were also sentenced to prison for a period of 15 to 18 years each and their Belgian citizenship stripped from them.

The final judgment on the Assadi bomb attack

The final judgment on Assadi was a highly significant event. It was a victory for the Iranian people and those fighting to achieve a free, democratic Iran. It was also a victory for the Belgian judicial system which stuck to its metaphorical guns despite veiled threats from Assadi and both threats and denials from the regime in Iran that they had anything to do with it.

“Iran and the rest of the world have been suffering from this terrorism in the past four decades,” said Mrs. Maryam Rajavi, the president-elect of the National Council of Resistance of Iran (NCRI). The regime tried its best to derail the trial but ended failing to free its prize terrorist in chief.

The regime had tried to claim that the Iranian opposition movement itself had engineered the bomb attack itself in a “false flag” operation, a claim that was dismissed as ridiculous by prosecutors as Assadi and his accomplices were caught red-handed with mountains of evidence against them.

The bomb, if it had been planted successfully, could have killed many people as the rally was attended by 25,000 at least with many foreign politicians and dignitaries.

The other significant feature of this trial was the clear link established by Belgian prosecutors between the would-be bombers and officials in the Iranian regime, including Supreme Leader, Ali Khamenei, the Iranian resident, Hassan Rouhani, and leaders of the Revolutionary Guards (IRGC) and Ministry of Intelligence and Security (MOIS).

The result of the trial should not now be left in limbo. It is important for international authorities, especially those in the EU to take Iranian state-sponsored terrorism more seriously.

This bomb attack threat was not the only Iranian terrorist mission in Europe. There have been others more successful than Assadi’s and there will likely be more unless the EU takes firm measures against Iran.

As German police discovered, Assadi was just one, perhaps the most important link in Iran’s terror network. Diaries recovered from his car on arrest in Germany provided extensive details of his movements all over Europe and who he met u with.

Iranian embassies and diplomatic missions are covers for Iran’s terrorist activities. The sooner the EU nations close down these embassies and deport their di0lomats, the safer Europe will be from the regime’s agents. This is a step that Mrs. Rajavi has been calling for several years.

As former Senator Robert Torricelli has said: “I do not know how European leaders who have Iranian embassies in their capital can continue as if nothing has happened. The events of today make a mockery of the fact that these relations will maintain. Every head of European country has some serious thinking to do.”

Iran’s supposedly more “moderate” spokespeople, such as Foreign Minister, Mohammad Javad Zarif, who has strong links to Iran’s intelligence ministry, should be regarded with extreme caution, as they are just as responsible for Iran’s terrorist activities as frontline agents like Assadi, yet are perceived differently.

.@bobtorricelli: If the intent of the Biden administration is to re-engage with Tehran on nuclear negotiations, they must consider who will be sitting across the table. Zarif? his agents? People who were sent to kill us? #Time4FirmIranPolicyhttps://t.co/evcXZk7BQU

As Robert Joseph, former U.S. Under Secretary of State and Special Envoy for Nuclear Nonproliferation, said: “You must take into account whom you are dealing with. It does not matter how well-spoken the regime’s officials are. These individuals would not be in their position if they were not complicit in the regime’s crimes. Zarif proves this rule.”

Appeasement of the regime by the EU in the hope that the regime will moderate has proved to be a failure. It has simply allowed the regime to think that it can do what it likes whenever it likes and get away with it. Assadi’s trial should be seen as the line in the sand beyond which Iran’s thugs should no longer be tolerated.

Amb. Robert Joseph: Now that the verdict has been handed down by the court, it's time for the governments to act decisively. further concessions to the regime will only bring more injustice to the Iranian people.https://t.co/vlQNlKQFpK

Former Italian foreign minister Giulio Terzi hit the nail on the head when he said: “Those who appease the mullahs’ regime must be aware that the mask is finally off. The regime is certified as a terrorist state by the court.”

Of course, just expelling Iranian diplomats and closing down their embassies is only one small step. The Iranian people deserve the chance to replace the dictatorship of the mullahs and enjoy a free, democratic society, where the fear of arrest and execution for saying what you think will never happen again.

.@GiulioTerzi: EU's lack of proper action has emboldened #Iran regime in its terrorist activities, giving them the impression that they will not be held accountable. Today is the day for a new approach to tackle the terror regime. #EUTime4FirmIranPolicyhttps://t.co/0W2leRZXRZ

The abridged version of an article written by Aladdin Touran for the PMOI/MEK.