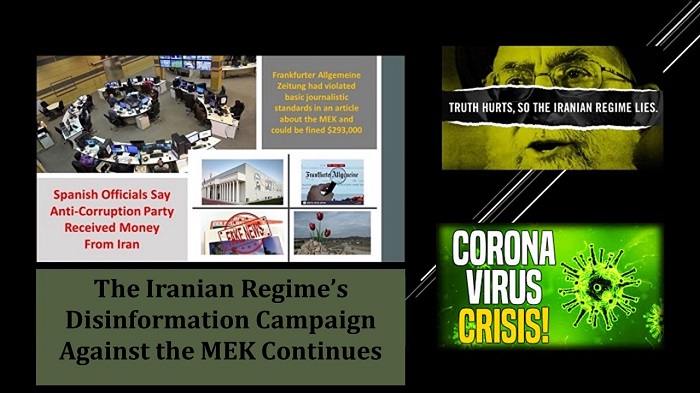 There is little doubt that the Iranian regime is facing challenges from the Iranian people as nationwide uprisings continue, influenced by the leadership of the NCRI President-elect Maryam Rajavi. Each year, the protests become more frequent and attract more and more people and the slogans that can be heard echoing through the air are “death to the dictator.”

These protests have outraged the regime and have led it to use repressive tactics to quell the dissent. The Islamic Revolutionary Guard Corps IRGC actually used live ammunition to fire at the crowds. According to Amnesty International, reports coming from the protests revealed that the shots fired were not just aimed at suppressing the people’s right of expression but were supposed to kill. In the end, 1,500 peaceful demonstrators lost their lives while thousands were arrested. There is nothing that seems to stop the regime as several of those detained at the time was sentenced to the death penalty.

#Iran’s Regime Disinformation Campaign Against the MEK
In the one-year period between the summer of 2015 and the summer of 2016, #Iranian state media produced more than 300 movies and television series to demonize the #MEKhttps://t.co/szMZrVpwWF

Regime’s handling of COVID-19 nothing short of incompetent

The National Council of Resistance of Iran has discovered that of the hundreds of millions of dollars in assets that the regime’s Supreme Leader Ali Khamenei controls little or none of it has been used to relieve the effects of the pandemic. This means Iran is leading the way globally in the number of fatalities caused by COVID-19.

More uprisings on the way

The People’s Mojahedin Organization of Iran (PMOI / MEK Iran) has consistently remained the main organized challenger of the theocratic system. It has had to endure both demonization and disinformation by the Iranian Ministry of Intelligence. Even though the presence of COVID-19 has reduced protests for the moment this isn’t likely to last much longer as the poor handling of COVID-19 by the regime has enraged members of the MEK.

However, throughout these times the regime has continued with its campaign of disinformation and even popular media outlets have been siding with the regime. However, Since the first most recent Iranian uprising, two decisions have taken place in a German court, against two distinct publications, demanding that they retract false claims that they have made.

#NCRI won court in Germany where the #MEK was defamed in the news media publications, Der Spiegel and FAZ. these landmark wins the #Iranian regime has enormous incentive to stage further disi. cam.against MEK activists #Iran and in overseas countries.https://t.co/lbo9tAkv0w

In July, prominent politician Robert Torricelli, who was present as a speaker at the resistance movement’s virtual conference organized by the MEK, stated: “that the New York Times would have surely faced a similar judgment as Frankfurter Algemeiner Zeitung and Der Spiegel, if not for the fact that US courts cannot as readily undertake such action.” This, he said, was because even the American newspaper of record is not immune to the “shadow of public relations firms, operatives and companies that are disseminating false information” against the MEK on a global scale.

This network that the regime has established has three initial goals. One of which is to make sure that the regime keeps in power while the second is to influence the international community into believing that there is no viable alternative to the present regime. The third is to prevent the increase in support for the MEK within Iran. The regime has been going about its campaign of disinformation by using state media to broadcast at least 332 movies and TV series which contain anti-MEK content.

No man can be a man of God that is a mass murderer. Completely hypocritical. And then he asks people to sacrifice their…

It seems that if the international media and Western policymakers paid more attention to what Iranian officials are actually saying, then they would get a clearer picture of what is going on in Iran. Rudy Giuliani highlighted something similar to this in his speech at the virtual NCRI event in July. He said that the regime had admitted that the MEK was the only tangible threat to the current regime.