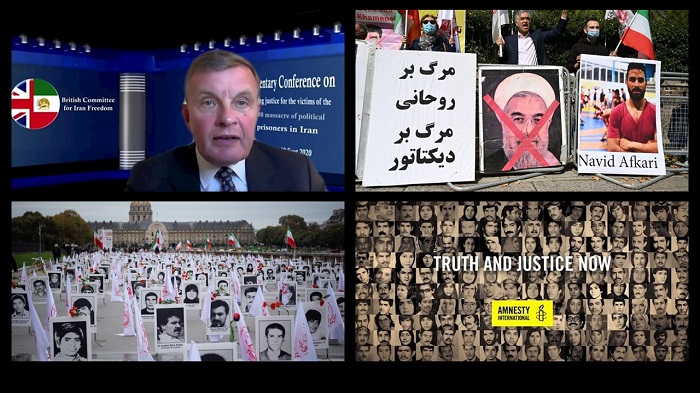 A British backbench MP called David Jones is trying to persuade his government to approach Iran in the same way that America is doing.

Iranian wrestling champion, Navid Afkari’s execution, touched world news and now David Jones is asking for the UK government to be more forceful in condemning its approach to the repressive tactics used currently by the Iranian regime to control its citizens.

The Iranian dissidents and the supporters of the (#PMOI / #MEK) and the (#NCRI) have staged protests in various countries to condemn the execution of Navid Afkari.https://t.co/3LvJ5R0dVx pic.twitter.com/N6Nep1YdAZ

Jones believes that the government is currently simply appeasing Iran in the hostile tactics it uses against its own people and it should initiate as soon as possible an ‘’independent foreign policy post-Brexit’’ which will be far tougher than its present stance.

#MEK #Iran: In a recent article published to The Telegraph on 13 September 2020, #British MP David Jones discussed how the #UK can stand in solidarity against the injustices of the #Iranian regime. https://t.co/UuUxgb9o3k pic.twitter.com/ic2RNxxI7T

Overall, Jones believes that the UK has typically been adopting appeasement towards Iran because that is what the EU is currently doing. After Brexit, the UK will be able to follow its own stance on Iran and that should be much more hardline.

Jones, who used to be the Secretary of State for Wales, along with his present position on Iran he is also asking for an international inquiry to be carried out on a 1988 massacre by the regime which resulted in more than 30,000 political prisoners primarily opposition activists affiliated to the Mujahedin-e Khalq Organisation (MEK), losing their lives by execution.

Instead of upholding justice, the Iranian judiciary oppresses and violates human rights. We urge the international community and individual governments to provide accountability and pursue justice for the regime's many victims. pic.twitter.com/Mr0HpJuJ5g

Jones also said that even though there were trade negotiations being held between the UK and the EU the country should be leading its own way on foreign policy as it no longer will have a union to oppose or agree with its stance. Iran is disruptive in the Middle East, but little has been said about it. It has even been pursuing the “testing of ballistic missiles that could one day carry a nuclear warhead,” Jones reported.

Britain, with both France and Germany, has all said recently that they will not support Washington in its drive to bring “snapback” sanctions against Iran because it has breached the JCPOA. Unfortunately, before and throughout Iran’s covetous nuclear initiatives, Europe has just simply appeased Iran.

Mrs. Rajavi, the President of the National Council of Resistance of Iran, based in Paris, said: “As the Iranian Resistance called for, just a few hours after signing of the JCPOA, the six UN resolutions must be reimposed and all sanctions on weapons sales to Iran must be reimposed.”

It is so afraid of spoiling its relationship with the Islamic Republic that it will not even condemn the human rights abuses that have been carried out by the regime. It was told by the MEK, the main opposition movement, that the regime had carried out mass executions of MEK members and supporters, way back in 1988 but did nothing to even condemn these actions.

There have been ongoing calls for the international community to initiate an inquiry but to no avail. Basically, the regime has got away with the murder of peaceful protesters seeking freedom and democracy and not theocracy that the regime tries to reign in for its citizens. What has always made the human rights abuses at that time even worse was because children 13 years old were hanged from cranes, allegedly six in one. The order to do this came directly from Ayatollah Khomeini after the Iran-Iraq war came to an end.

In his final words in the article, he is requesting that Britain unite with the U.S. to reimpose sanctions on Iran and an inquiry into the 1988 massacres should be initiated as soon as possible.

Another mistake has been the false hope and expectation that perhaps the religious fascism will one day abandon its terrorism if it receives concessions or incentives. The regime, of course, took away all the concessions, and yet refused to abandon terrorism. #Iran pic.twitter.com/jWFFoULuQu