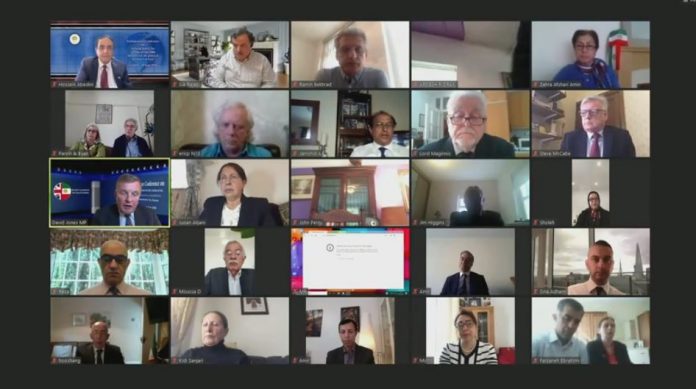 Over the past year, the Campaign Calling for Justice for the Victims of the 1988 Massacre has been expanding – both inside Iran and around the world. The campaign has been worrying about the Iranian regime that fears being held accountable for one of the most horrific crimes against humanity in recent decades.

During the summer of 1988, the Iranian regime ordered the execution of 30,000 political prisoners. Many of the officials involved in the massacre, including members of the so-called “death commissions” that sent people to their death, have risen through the ranks. For example, Mostafa Pour Mohammadi was the Minister of Justice and is now Adviser to the Judiciary, and Ebrahim Raisi who was a presidential candidate and now the Minister of Justice.

Lending their support to the campaign for justice, British MPs held a parliamentary conference on 10th September to discuss the issue.

A number of MPs spoke about the urgency and importance of seeking justice, with many describing the awful incident that no one has been held accountable for as unacceptable.

MP David Jones said that the human rights situation in Iran is something that the international community should be paying attention to and taking action towards.

.@DavidJonesMP: The UK must work with allies to make sure this year’s United Nations General Assembly resolution calls for an independent investigation into the #1988Massacre.https://t.co/vQPqbZny0L

Highlighting the mistakes of the international community, MP Steve McCabe said that the people of Iran have been failed. He said that not recognizing the National Council of Resistance of Iran (NCRI) and President-elect Maryam Rajavi has been a mistake.

MP McCabe also highlighted that the Iranian regime continues to “slaughter people”, drawing attention to the 1,500 people that were killed during the widespread protests in November last year.

.@steve_mccabe: We have already failed the Iranian people by ignoring the #1988Massacre We must expose the truth for the world to see. Nothing else will do.https://t.co/723wCfbFmc

Former Irish Senator Michelle Mulherin also emphasized the responsibility of the international community, saying that when a government “turns on its own people”, foreign governments must not remain silent.

Senator Michelle Mulherin: I support the call and the efforts, and it is an issue that I have taken up with our Minister of Foreign Affairs and I will continue to do so.#1988Massacre #NoImpunity4Mullahs #Iranhttps://t.co/ZPQDYv9QH2

There is plenty of evidence proving the Iranian regime’s organization of this crime and the participation of numerous regime officials. As MP Sir Roger Gale pointed out during the conference, there is international law that exists exactly for this reason. MP Gale also reaffirmed his support for the committee, saying that there are many Members of Parliament that stand with the people of Iran in their quest for justice, freedom, and democracy.

MP Bob Blackman spoke about some of the reasons for Iran’s impunity. He said: “Sadly, we are aligning ourselves with the failed policy of appeasement pursued by the European Union, which for the last four decades, has provided the regime in Iran with impunity for its egregious human rights violations including the 1988 massacre of 30,000 political prisoners, and on its terrorism to preserve diplomatic dialogue.”

.@BobBlackman: The UK must take the lead at international level and work with allies at the UN to establish an independent inquiry into the #1988Massacre.#NoImpunity4Mullahs #Iranhttps://t.co/ToTdLY74CD

International human rights organizations are working towards an improvement in the situation in Iran. Last week, Amnesty International published a report entitled “Trampling Humanity” in which it examined the appalling situation in Iran, including the thousands of arrests and killing of 1,500 protesters in November last year.

Inaction vis-à-vis the crimes of the clerical regime undermines human values; message to conference entitled, “Seeking Justice for Victims of the #1988Massacre of the political prisoners in #Iran”https://t.co/1oxeeQktkL pic.twitter.com/7udpBW82jC

Mrs. Maryam Rajavi the President-elect of the National Council of Resistance of Iran’s (NCRI): Inaction vis-à-vis the crimes of the clerical regime undermines human values; message to a conference entitled, “Seeking Justice for Victims of the 1988 Massacre of the political prisoners in Iran”