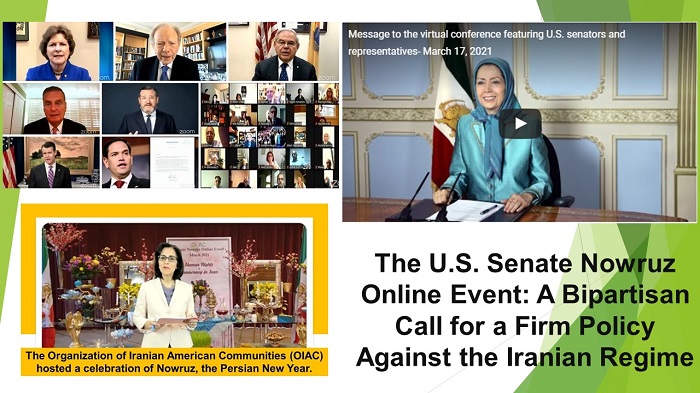 On Wednesday 17th March 2021 the Organization of Iranian American Communities (OIAC) called for tougher policies to be made against the Iranian regime. In an online event, some high-ranking members of the Foreign Relations, Judiciary, and Homeland Security Committees spoke. They represented both democrats and republicans.

Former Connecticut Senator Joe Lieberman said that while he was in office, issues revolving around the Iranian regime were prevalent and that both main political parties in the country were in agreement. He spoke of the role of the main opposition to the Iranian regime – the National Council of Resistance of Iran (NCRI) – saying that it has played an important role in drawing attention to the problems in Iran.

The National Security Advisor to former President Obama, General James Jones, agreed that the NCRI is a major organization that represents a future “fabulous free society living under democratic values”. For this reason, he explained, the Iranian regime sees the NCRI as the biggest threat to its existence. He said: “We owe her [Mrs. Maryam Rajavi, the NCRI’s President-elect] and the people of the NCRI, our total support. We owe her the belief that the better days for Iran are coming and coming very soon.”

Mrs. Rajavi also spoke to the participants, mentioning the Coronavirus health crisis that the regime has severely mishandled. She said that this is one more reason why the people are desperate to see the regime collapse.

She said that the “fire of the uprisings has risen from under the ashes of the coronavirus”, referring to the unrest that broke out in Sistan and Baluchistan after the notorious Islamic Revolutionary Guard Corps (IRGC) opened fire on fuel porters.

Many of the speakers highlighted the regime’s violations of human rights, saying this is one of the reasons why the Iranian Resistance has so much support outside the country. They said that foreign policy must promote the removal of the Iranian regime. The Democratic chairman of the Foreign Affairs Committee Robert Menendez said that the NCRI is a “viable alternative” to the Iranian government, indicating that the regime places more importance on acquiring a nuclear weapon than it does on human rights.

A number of the speakers emphasized that the sanctions currently imposed on the regime must remain in place because they are weakening the regime.

Senator John Cornyn said that the United States “will always stand with the people of Iran” and said that his country will do what it can to support their “desire to be free”. He called on the United States to hold the regime accountable by ensuring that sanctions are maintained.

Former Senator Kelly Ayotte also called for the maximum pressure campaign against the “murderous Iranian regime” to be maintained and said that the United States should “lead an effort to continue international sanctions on Iran when it comes to its ballistic missile program”.

Speaking on behalf of the Iranian activist community, Ramesh Sepehrrad from the OIAC said that “existing sanctions hurt only the Iranian regime, not the Iranian people” and that the people know America is not the enemy as the regime repeatedly states.