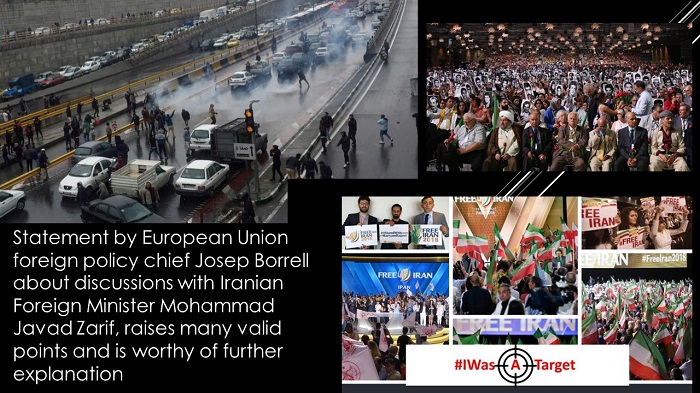 Alejo Vidal-Quadras, the former vice-president of the European Parliament, has written an op-ed to decry Europe’s refusal to address any of Iran’s malign actions that aren’t directly related to the country’s nuclear program of the Joint Comprehensive Plan of Action (JCPOA).

The comments by Borrell indicate that, regardless of other developments, like Iranian diplomat – Assadollah Assadi– being on trial in Europe for terrorism, the EU’s priorities are unchanged and it remains committed to the 2015 Iran nuclear deal, which Iranian officials and state media lapped up.

Vidal-Quadras wrote: “Borrell’s narrow focus on the nuclear deal may not have come as a surprise in the wake of previous conversations with the Iranian Foreign Ministry. But his latest talks with Zarif were unusual because they took place only days after the beginning of a terrorism trial in Antwerp, where four Iranian operatives are accused of participating in a plot to set off explosives at an international gathering of the National Council of Resistance of Iran’s (NCRI), and the People’s Mojahedin Organization of Iran (PMOI / MEK Iran).”

The trial, expected to conclude with four guilty verdicts and long prison terms on January 22, has demonstrated that this wasn’t the act of a rogue official but rather ordered and approved by the highest levels of the regime following the December 2017 uprising that threatened to overthrow the regime.

The regime brutally suppressed the protests, something they repeated in November 2019, and ordered terror attacks against the (NCRI) and (PMOI / MEK Iran) in Albania and France. But Borrell isn’t paying much attention to terrorism or the suppression of protesters.

Vidal-Quadras wrote: “The background for these crimes suggests that the EU is not only abdicating its moral responsibility but also overlooking extraordinary opportunities to exert effective pressure on the Iranian regime.”

Unrest is growing in Iran and the regime is only looking for more ways to suppress it and maintain control, especially if they continue to face no consequences. Sending Assadi and his cronies to prison is not enough. Europe must change its policies. But EU leadership is solely focused on saving the nuclear deal.

"Considering #Iran regime's use of diplomatic cover to carry out terrorist acts, the necessary practical warnings should be given to Tehran, such as #ShutDownIranTerrorEmbassies & expel its diplomats", 240 cross-party European lawmakers said in a statement https://t.co/HfD32k6C7J pic.twitter.com/AwobmG0lVM

Thankfully, 240 European lawmakers signed a letter to Borrell and British Foreign Secretary Dominic Raab urging policy change, including making future relations contingent on Iran ending its terrorism in Europe. This could also include multilateral sanctions, diplomatic isolation, and the closure of embassies.