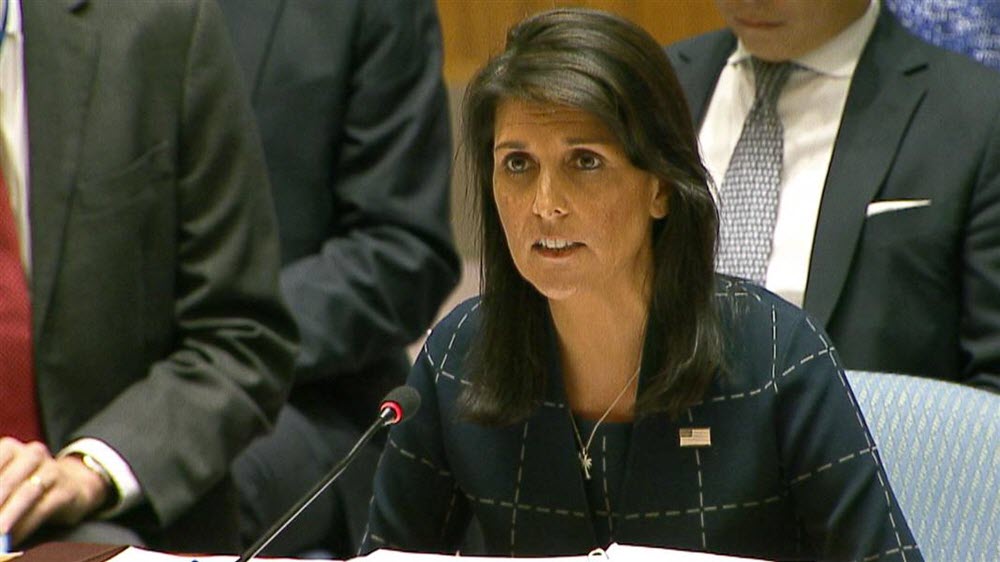 In response to US President Trump’s review of a new, aggressive strategy toward Iran, US Ambassador to the United Nations Nikki Haley’s visit by to Vienna, and Washington’s demand for inspections of Iran’s military sites to verify Tehran’s compliance under the Joint Comprehensive Plan of Action (JCPOA), also known as the Nuclear Deal, Tehran has resorted to threats of exiting the agreement.

Iranian officials claim the ability to launch uranium enrichment “within days” and call the inspections of military sites a “red line” in an attempt to intimidate the international community.

In an interview, MP Mohammad Ismaeel Saeedi told the semi-official Tasnim news agency, “The Islamic Republic of Iran considers its military complexes as red lines and will never allow any foreigner to set foot on such sites.”

Ambassador Haley explained the importance of what is at stake, “If inspections of Iranian military sites are ‘merely a dream,’ as Iran says, then Iranian compliance with the JCPOA is also a dream,” she said.

According to Alaedin Borujerdi, chair of Iran’s parliamentary Security Commission, “Inspection of military sites hinges on a decision by the Supreme National Security Council.”

In its report to Parliament on the JCPOA implementation, the Iranian Foreign Ministry indicated that, “one of the most important obstacles to taking full advantage of the JCPOA are initial US sanctions imposed back in the 1980s and 90s against the Islamic Republic’s human rights, terrorism, and money laundering.”

Although the head of Iran’s Atomic Energy Organization, Ali Akbar Salehi, claimed Tehran is capable of enriching uranium up to 20% at the its underground site in Fordo, he subsequently asked, “Now assume as an official I placed something before the enemy as a political pretext. Should you be supportive and confirm their words? Or strengthen the remarks made by our own officials?”, leaving one wondering what to believe.

Following Salehi’s remarks, RajaNews ridiculed him and demanded his resignation, saying, “Russia’s response to the possible US departure of the nuclear deal was far more firm than those of our current government officials and those of Salehi… Our officials lack the necessary will to even preserve the JCPOA as is.”

Tehran alleges that, not only it has never violated JCPOA, it has gone far beyond its obligations to convince the West, and especially the US, to not tear up the nuclear deal.

However, in a recent landmark speech at the American Enterprise Institute think tank, Ambassador Haley said, “For decades, the Iranian military conducted a covert nuclear weapons program, undeclared and hidden from international inspectors. In 2002, Iranian dissidents revealed the existence of a uranium enrichment plant and heavy water reactor – both violations of Iran’s safeguards agreement with the IAEA. We were promised anytime, anywhere inspections of sites in Iran. The final agreement delivered much less. The promised 24/7 inspections apply only to Iran’s ‘declared’ nuclear sites. For any undeclared but suspected sites, the regime can deny access for up to 24 days. Then there’s the deal’s expiration dates.” Haley added that there may be hundreds of unrevealed sites that have not been inspected.

In his recent report, IAEA chief Yukiya Amano said his agency will continue verifying Iran’s obligations to the JCPOA, adding that his evaluations of Tehran’s unannounced nuclear activities and materials will continue. “When it comes to inspections, there are no differences between military and non-military sites,” Amano emphasized.

The Kayhan daily wrote, “Amano’s recent remarks have sounded the alarm bell not only for JCPOA advocates but the entire country.”

Iran is accelerating its domestic human rights violations and its expansionist policy. Additionally, its close military and atomic cooperation with North Korea significantly threatens world peace and security. Ambassador Haley said that the time has come when “blinders may finally be off on US-Iran policy.”