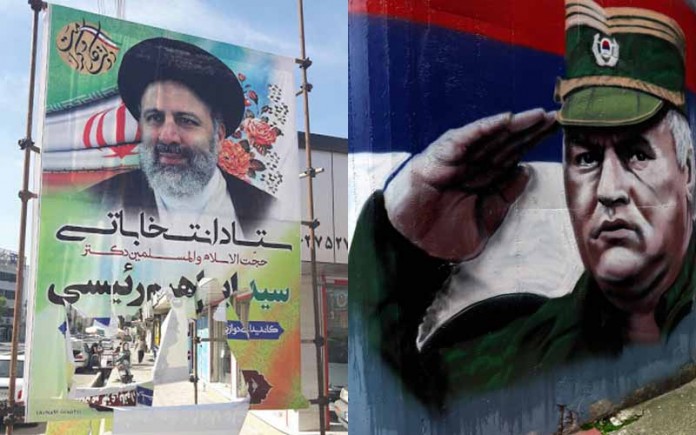 The International Residual Mechanism for Criminal Tribunals (IRMCT) handed down its final decision in the case of Bosnian Serb commander Ratko Mladic for war crimes on Tuesday, June 8. In Srebrenica, Bosnia, and Herzegovina, he ordered the brutal death of 8,000 unarmed men and boys roughly 26 years ago.

“Today, the International Residual Mechanism for Criminal Tribunals at the United Nations in The Hague affirmed his conviction for genocide, crimes against humanity, and war crimes. This landmark decision demonstrates that people who perpetrate atrocities will be held accountable. It also strengthens our united resolve to avoid future genocides anywhere on the planet,” said US President Joe Biden.

Meanwhile, Ebrahim Raisi, who is accused of playing a crucial role in the 1988 mass execution of thousands of political prisoners, is running for president. Raisi had a crucial role in clearing jails of political dissidents, particularly members and followers of the prominent opposition Mojahedin-e Khalq (MEK Iran / PMOI), according to witnesses and details collected by victims families.

According to the MEK, the Iranian government established “Death Commissions” across the country, which resulted in the death of at least 30,000 political prisoners, based on a fatwa issued by the founder of the Islamic Republic, Ruhollah Khomeini.

“Whoever remains steadfast in their support for the MEK at any stage is waging war on God and is condemned to death,” Khomeini declared. “As soon as possible, annihilate the enemies of Islam.”

Hossein-Ali Montazeri, Khomeini’s deputy, gathered members of the Tehran execution commission to defend the Islamic Republic’s reputation. In a leaked audiotape dated August 15, 1988, Montazeri is heard pleading with Raisi and his accomplices to stop the murders and calling extrajudicial executions the worst crime committed throughout the Islamic Republic’s existence. “History would judge us, and you would be remembered as criminals,” Montazeri warned his visitors.

Raisi was chosen as the Judiciary Chief by Supreme Leader Ali Khamenei in March 2019 as a result of his crimes against dissidents and to handle demonstrators. Analysts agree Raisi is Khamenei’s preferred candidate in the June 18 presidential election, and that the Supreme Leader is determined to select him as President at any costs.

Nonetheless, while US and European officials denounce Srebrenica killer Mladic and urge for the prevention of atrocities elsewhere in the world, Iranian opponents argue that it is past time to hold Iranian officials accountable for their innumerable crimes both inside and outside Iran.

“Rather than investigating allegations of enforced disappearances, torture, and other ill-treatment of detainees, Iranian prosecutors became complicit in the repression campaign by filing national security charges against hundreds of people for exercising their rights to freedom of expression, association, and peaceful assembly, while judges handed down guilty verdicts on the basis of torture-tainted ‘confessions.” Claimed Diana Eltahawy, Amnesty International’s Deputy Regional Director for the Middle East and North Africa.

According to Iran analysts, the international community should do whatever it takes to make those responsible for human rights violations, mass murders, and genocides against minorities in Iran accountable.

As the Supreme Leader selects a convicted murderer as President, dissidents argue that the world must choose between standing with the Iranian people and supporting their fight for freedom, human rights, justice, and the rule of law, or appeasing a ruthless and merciless tyrant.