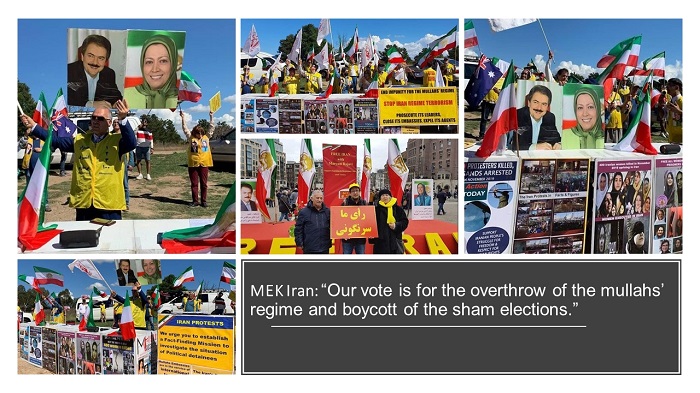 Iranians from all over the world came together to participate in a social media campaign to broadcast anti-regime messages using the hashtag #BoycottIranShamElections, which received tens of thousands of shares on its first day.

Over the last year, the opposition’s internal network has led a well-funded campaign demanding an outright election boycott, including putting up posters of opposition leaders on highways and anti-regime graffiti on city walls. In April alone, there were at least 250 protests.

Ali Khamenei, the Supreme Leader, has already confirmed that he supports Ebrahim Raisi for President, implying that the rest of the cabinet does as well. In fact, the Guardian Council disqualified nearly 500 candidates, including several well-known figures such as former Parliament Speaker Ali Larijani, to help Raisi win.

The chair of the National Council of Resistance of Iran’s (NCRI) Foreign Affairs Committee, Mohammad Mohaddessin, claimed on Wednesday that this was Khamenei’s attempt to consolidate power as political turmoil intensifies in the face of Iran’s multiple crises.

That boycott was motivated in part by large protests, but also by opposition campaigning, so it comes down to the fact that after the government’s mismanagement of the pandemic, more people will boycott the elections.

“The nationwide call for the boycott of the sham election has gained momentum, and people are openly calling for the regime’s overthrow. [This indicates that there is a] looming nationwide uprising waiting in the wings [that is] far more intense and widespread than in previous years.” Mohaddessin added.

“Reminder: Frontrunner for IRI president sanctioned by US Treasury for “executions of individuals who were juveniles at the time of their crime; torture, other cruel, inhuman, degrading treatment punishment of prisoners in Iran, including amputations,” wrote Mark Dubowitz, the CEO of the Foundation for Defence of Democracies (FDD).

Objecting to the regime’s rigged election Struan Stevenson, a former MEP, referenced his piece about the election in a tweet, saying, “My article on Iran’s so-called elections.” Iran’s Islamists have chosen an executioner as their presidential candidate. “

“Raisi’s fast track to the presidency is the clearest sign yet that the supreme leader is panicking. Since 2018, there have been three nationwide uprisings, with daily protests continuing in towns and cities across Iran. The economy has collapsed. More than 75% of the population now struggle to survive on daily incomes below the international poverty line. Children rummage through trash cans for scraps of food.” Reported the UPI, on 1 June.

As reported by the state-run daily Ghatreh on 2 June, the regime’s condition is getting so serious that one of the regime’s leaders, Hassan Abbasi, regrets the regime’s decision to hold elections. “We have a problem that started from Mr. Khatami’s term in 1997. Before that, in the fifth parliament, we approved and accepted the model of Western democracy in the elections. We made a mistake.

Ali Sufi, a government expert also admitted “We do not see any electoral excitement, the election atmosphere is not political, it is security. This planning (elimination of candidates) based on expediency is considered more important than elections.” Reported the ILNA, on 2 June.