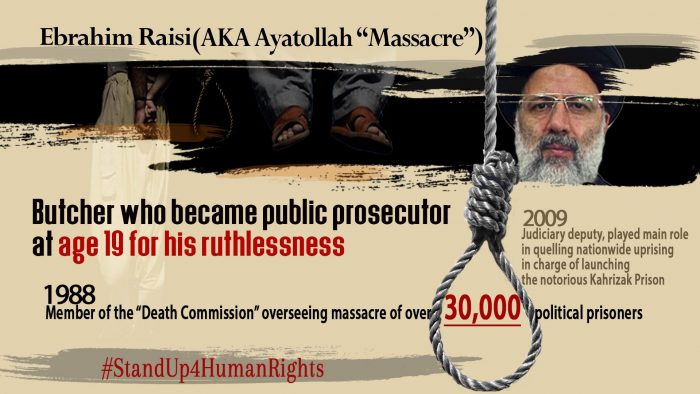 With Ebrahim Raisi, the executioner, installed as the Iranian regime’s next president, the international community must realize the implications of the regime’s actions. It goes without saying that the results of undemocratic elections are not inherently extraordinary. Not to mention the president’s utter subordination to Iran’s Supreme Leader, who wields absolute power in the country.

Raisi’s life background is instructive. Raisi was selected to a four-member “Death Commission” in 1988, which was tasked with the execution of at least 30,000 political prisoners in Iran. Many relatives are still uninformed of the fate of their loved ones, as the bodies were thrown into secret mass graves. The slaughter has been labeled a crime against humanity by international rights organizations like Amnesty International and seven UN rapporteurs.

In Iran, Raisi is known as the “Henchman of 1988.” Several big uprisings were mercilessly suppressed during his tenure as the head of the judiciary.  According to Amnesty International, Raisi’s well-documented rights crimes against demonstrators include the horrific torture of at least 7,000 protesters.

Therefore, the first thing to understand is that the regime is unapologetic about its culture of impunity, and it has no hesitation about relying on veteran offenders against humanity to meet the demands of the Iranian people.

Faced with domestic and international crises, Ali Khamenei, the regime’s Supreme Leader, had no choice except to essentially promote a mass killer like Raisi.

The economy is a catastrophe. State corruption is widespread, and the people, who now make up the majority of the population, resent the regime for it.

Because the regime is purposefully allowing the coronavirus pandemic to spread in order to quell unrest, it has killed over 300,000 individuals in Iran.

For all of these reasons and more, Iran has seen three significant mass protests against the regime in the last four years. The number of defections among the regime’s forces is increasing. Khamenei now has to establish a strong defensive line to unite his repressive forces in the face of more upheavals.

The elimination of all opposing factions inside the dictatorship is another significant event in Raisi’s rise to power. The regime’s so-called “moderates,” long praised by Western apologists, are nowhere to be found in the establishment.

During the November 2019 protests, during which the dictatorship slaughtered at least 1,500 protestors, chants of “reformer, hardliner, the game are now over” were heard in over 200 cities.

The “reformer vs. hardliner” debate has always been a game that the Iranian people have refused to participate in. Western apologists, on the other hand, have been repeatedly deceived by the scheming mullahs.

Finally, in the wake of a series of uprisings that have shaken the dictatorship since 2017, the people decided to boycott the sham presidential elections held over the weekend.

Even the fundamentalists’ propagandists were unable to create an official number above 49 percent based on the eyewitness testimony of the abandoned polling sites.

As a result, even the regime essentially accepted that the majority of Iranians reject it as illegitimate in its entirety. This comes as the People’s Mojahedin Organization of Iran, or MEK, said that more than 90% of eligible voters rejected the sham election, based on reports from 1,200 correspondents on the ground.