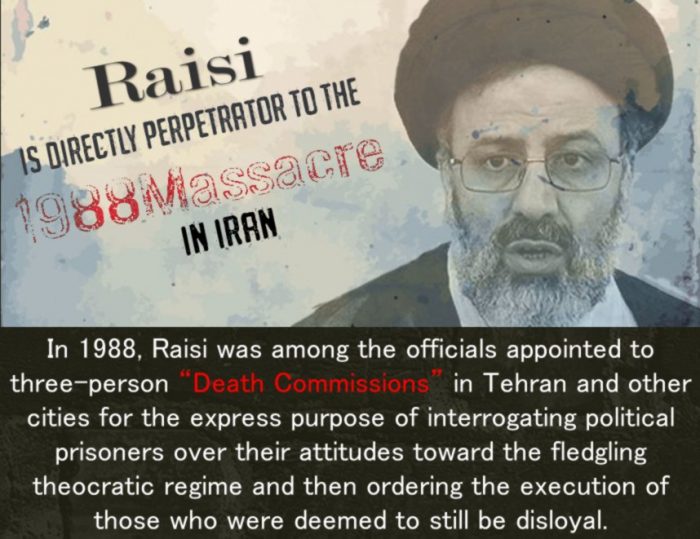 Ebrahim Raisi, the infamous cleric who has been a vocal opponent of peace with the West, will take office as Iran’s next president next month. Certainly, he will not be elected by Iran’s 80 million citizens. Supreme Leader Ali Khamenei and the unelected members of the Guardian Council, whom Khamenei designates, have already taken care of it. The Guardian Council evaluated all of the candidates last week, leaving Raisi as the only viable candidate.

The supreme leader has chosen a course of confrontation with the Iranian people and the international community by appointing Raisi to power.

In 1988, as Tehran’s deputy chief prosecutor, Raisi was appointed by the Islamic republic’s founder, Ruhollah Khomeini, to a committee tasked to execute more than 30,000 political prisoners for refusing to renounce their opposition to the regime, primarily members of the opposition the People’s Mujahedin of Iran (PMOI / MEK Iran).

Last summer, a panel of UN special rapporteurs stated the 1988 mass extrajudicial executions should be considered “crimes against humanity,” and that the international community’s unwillingness to hold the perpetrators accountable had perpetuated impunity in Iran.

The supreme leader was forced to make a decision in the face of a collapsing economy, a series of nationwide protests calling for regime change, and increased international isolation.

He could either moderate his regime and open it up to the rest of the world, or he could just consolidate it even more while increasing terror at home and abroad.

Khamenei is well aware that his dictatorship has lost most of its supporters, and that any easing in repression would allow an enraged populace to rise up and overthrow him. His anxiety is heightened by the fact that the opposition MEK has re-established its network, and its Iranian resistance groups are directing protestors to demand an end to religious authority.

During a series of tweets sponsored by Iran’s abroad communities, those resistance units began sending out footage of their operations demanding a national boycott of the mullahs’ sham election. Resistance leaders’ posters were displayed on highway signs and municipal walls. Graffiti from the resistance calling for a boycott of elections was seen on the walls.

Meanwhile, Khamenei is fuelling regional instability to compensate for his internal deficiencies and to silence the regime’s restless opposition factions.

The Mullahs are certain that they can get away with crimes because they are assured of silence and inaction by the western.  The Mullahs are ordering terrorist attacks all across the world, from Kabul to Riyadh, Beirut to Baghdad, Damascus to Gaza.

Even so, Khamenei’s deadly impasse will not be solved by this empty display of force. That’s because Iranian society has turned into a ticking time bomb, and crackdowns and executions have failed to prevent the rise of organized opposition in the form of resistance units.

Cooperation with the fundamentalists, including the lifting of any sanctions, will only aggravate the situation and help them obtaining nuclear weapons and stoke regional conflict.

It’s past time for the world’s democracies to end impunity for Iran’s mass murderers, including Ebrahim Raisi, the regime’s next president. The United States should take the lead for a United Nations investigation into its crimes against humanity.