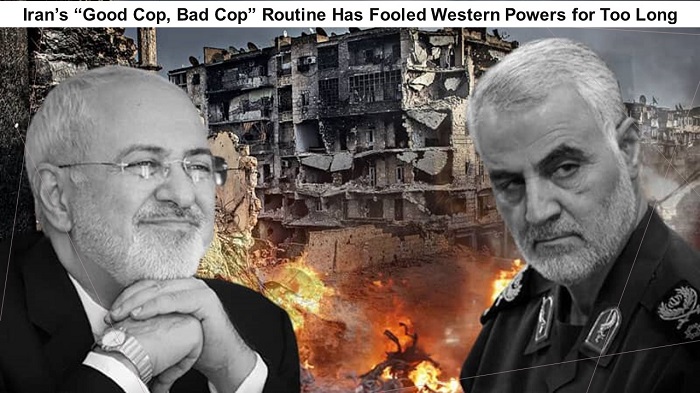 The National Council of Resistance of Iran (NCRI), and the People’s Mojahedin Organization of Iran (PMOI / MEK Iran), the Iranian regime has been deceiving the international community with several tactics for many years. Unfortunately, some countries have fallen hook, line, and sinker for the “good cop, bad cop” act described by (NCRI) and (PMOI / MEK Iran). And what is worse is that many have failed to even recognize that they have fallen for this act.

(NCRI) and (PMOI / MEK Iran) explains that the “bad cop” warns about the negative consequences of something, while the “good cop” acts to make it clear that these consequences are avoidable and don’t need to happen. Both cops have the same malign interest. The good cop is no more trustworthy, honest, or reliable than the bad cop.

Western governments have fallen for this routine for decades and it is not an exaggeration to say that Western policies have been heavily influenced by this routine. The many US and European officials still believe that the “good cops” are so-called moderate individuals that genuinely clash with the “bad cops”.

This has resulted in appeasement towards the regime with many leaders working along with the “good cops” that they considered so-called moderate. They have maintained that the moderates will be able to put a stop to the damage being done by the hardliners.

One of the most significant examples of the West falling for the regime’s malign tactics is the Joint Comprehensive Plan of Action (JCPOA), or the 2015 Iran nuclear deal as it is known. Iran was given a huge amount of concessions and the deal was very one-sided (in favor of the mullahs’ regime).

Last week, the mullahs’ regime’s Islamic Revolutionary Guard Corps (IRGC)  seized a South Korean vessel. It announced that the vessel was polluting the waters, but it later became clear that the regime was taking it as leverage to pressure South Korean negotiators ahead of a multi-billion dollar petroleum dispute.

Foreign Minister Javad Zarif – the good cop in this scenario – emphasized that the vessel matter was one for the courts and that the judiciary is an independent body. However, it was the IRGC that seized the vessel and the Foreign Ministry never alluded to any independence it has. It tried to resolve the “dispute” amicably, suggesting that any resolution to appease the IRGC leading to the release of the vessel would be a good opportunity. These “good cops” of course never portrayed the situation as it would be – the result of an ultimatum.

Should South Korea fall for the regime’s tactics, Western policymakers need to really pay attention and see that Iran is successfully managing to manipulate the international community using its moderate act to pursue its malign goals.

Zarif is the one that Western leaders believe is the ultimate moderate. However, let’s look at the reality of the situation. He has already admitted that he had a very close working relationship with Iran’s top terrorist Qassem Soleimani. He admitted that they both had the same foreign policy objectives. And Zarif has also expressed his full support for the IRGC.

What more will it take for Western powers to realize that there are no moderates within the Iranian regime? Every cop is a bad cop in that regime.