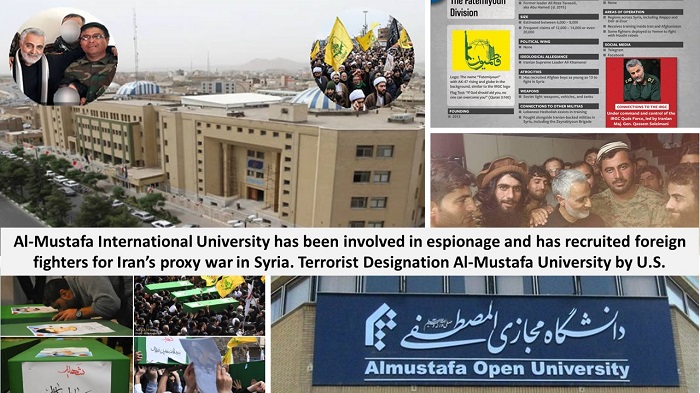 Since the Islamic Revolution in 1979, Iran’s clerical establishment has used religious organizations to expand their influence overseas. The  People’s Mojahedin Organization of Iran (PMOI / MEK Iran), and the National Council of Resistance of Iran (NCRI) reported that one of these is the Al-Mustafa International University, which is a religious seminaries network based in the Shi’ite holy city of Qom.

On Tuesday, the US Dept. of the Treasury (OFAC) designated the #Iran regime’s envoy to the Houthi in Yemen. The envoy is known as Hasan Irlu. The US also designated an official from the (IRGC), as well as the Al-Mustafa International University.https://t.co/575L0OPlId #MEK pic.twitter.com/K5aoKybVtV

It has branches in some 50 countries.

The university says it teaches the following:

But Tehran’s challengers say the university has been involved in espionage and has recruited foreign fighters for Iran’s proxy war in Syria.

The U.S. designated the IRGC-QF “envoy” to the Houthis, Hassan Irlu, Al-Mustafa International University, and an Iran-based operations coordinator for supporting the IRGC-QF. We will continue to use all tools to expose and counter Iran's malign behavior. https://t.co/9kPguwqpYl

The United States implemented sanctions on the large university network on December 8th, stating that this was due to its involvement in the recruitment of Afghan and Pakistani students to fight in the Syrian conflict. The U.S. Treasury Department said Iran’s elite Quds Force, which operates under the IRGC but overseas used the university’s overseas branches as “recruitment platforms” for “intelligence collection and operations,” including the recruitment for pro-Iranian militias.

It also alleged that the Quds Force used the Al-Mustafa International University as a cover so that it could recruit Afghans for the blacklisted Fatemiyoun Brigade, which is a pro-Iranian militia that fought in Syria. Also, the Quds Force used Al-Mustafa’s campus in Qom “as a recruitment ground” for Pakistani students to get them to join the blacklisted Zeynabiyoun Brigade, a militia that was composed of Pakistani Shi’a.

On December 9th, the university responded by saying it promoted “peace, friendship, and brotherhood among nations” and said the U.S. decision was “hegemonic.”

Ali Alfoneh, a senior fellow at the Arab Gulf States Institute in Washington, who has monitored the IRGC activity in Syria, said that, according to his records from January 2012 to December 2020, 3,059 Iranian and allied foreign fighters were killed in combat in Syria. He said 3 were students or graduates from the Al-Mustafa International University referred to as the Jamiat al-Mostafa University in Iran. He also said that Jamiat al-Mostafa had never served as the main recruitment ground for the IRGC’s war endeavors in Syria.

The IRGC recruited several thousand Afghan migrants and refugees within its own borders while secretly drafting hundreds of Shi’a within Afghanistan. The same tactic was used to recruit Pakistanis. Alfoneh said the “three individuals identified appear to have been in command, intelligence, or political-ideological indoctrination positions.” Therefore, the IRGC believed the graduates or students of the Al-Mustafa International University were “high-value individuals.’ Alfoneh said the IRGC used the Afghan fighters as “cannon fodder,” and few resources had been used to train them. It has never been revealed how many Fatemiyoun members fought in Syria but experts believe that the number was between 5,000 and 20,000.

#Iran|ian backed proxy Fatemiyoun Brigade announced (yesterday) the death of Sayyed Abuzar Hosseini during the reported #IDF/#IAF airstrikes on the 18th November 2020 in #Damascus. He had been stationed in #Syria since early 2016. He was buried in buried in Mashhad, #Iran https://t.co/xlnOeajVG3 pic.twitter.com/qrocvy37lY

Iranian authorities have stated that the fighters went to Syria by choice in order to defend Shi’ite holy sites. Human rights groups believed that Afghan migrants and refugees in Iran were offered financial incentives and Iranian residence permits if they willingly joined the fight in Syria. The United Nations High Commissioner for Refugees (UNHCR) estimates that up to 3.5 million documented and undocumented Afghan refugees and migrants live in Iran. Many from time to time are expelled by the authorities.

One of the headquarters of Fatemiyoun is located in Sheikh Najjar garrison.
Pakistani forces (Zeynabiyoun) are also present in #Aleppo. pic.twitter.com/sXykjHsAOf

A third student was Alireza Tivasolii, the Afghan commander of the Fatemiyoun Brigade and most important student in Al-Mustafa was killed in 2015 during a confrontation with the Al-Qaeda-linked Al-Nusra Front in the southern Syrian province of Daraa. After the war ended in 1988, Tivasolii enrolled and then graduated from the Al-Mustafa International University in Qom. In the 1990s, he returned briefly to his home in Afghanistan to fight the Taliban, which had stolen large swaths of the country after the Soviets withdrew and devastating civil war. Tivasolii also fought alongside the Iranian-backed Hizballah movement in Lebanon during the war with Israel in 2006. At his funeral in 2015 which took place in Mashhad, the state media reported that Tivasolii was trusted by the former commander of the Quds Force, Qasem Soleimani, who was later killed in a U.S. airstrike in January of this year. His funeral was attended by members of the Fatemiyoun Brigade.

Hundreds of students are enrolled at the local branch of the university in Kabul and the name given is Jamiat ul-Mustafa. Hamid Obaidi said the ministry would soon “make a decision” about the university’s future in Afghanistan considering U.S. sanctions against Al-Mustafa.

Witnesses are saying that Al-Mustafa has become Iran’s chief tool for advertising Shi’ism overseas. The university received about $80 million in the 2020-2021 Iranian budget which shows its importance.

Saeed Ghasseminejad and Alireza Nader at the Washington-based Foundation for Defense of Democracies (FDD) stated that 3 religious organizations, which are:

Each of these plays a “central role in projecting [Iran’s] influence abroad.”

The 3 organizations focused on the following:

‘’Iranian journalist and writer Akbar Ganji said that Al-Mustafa “harbors a huge army of potential sympathizers of ayatollahs who could spread their ideology around the globe.”

Following the announcement, Mrs. Maryam Rajavi, President-elect of the National Council of Resistance of Iran (NCRI), issued a statement on the IRGC’s terrorist designation, calling it an imperative for Middle Eastern security, peace, and stability, and an urgent and necessary step to end war and terrorism throughout the region and the world.

The statement read: “Iran-based Al-Mustafa International University, which claims branches in over 50 countries, enables IRGC-QF intelligence operations by allowing its student body, which includes large numbers of foreign and American students, to serve as an international recruitment network.