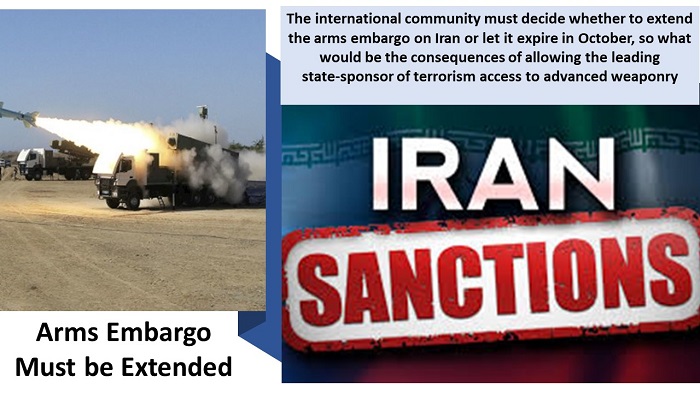 The international community must decide whether to extend the arms embargo on Iran or let it expire in October, so what would be the consequences of allowing the leading state-sponsor of terrorism access to advanced weaponry.

In a webinar debate on August 26, Alireza Jafarzadeh, the deputy director of the National Council of Resistance of Iran (NCRI) US Representative Office, said that it was essential for the United Nations to reimpose all sanctions on Iran to protect global peace and security.

Analysis by PMOI / MEK IranThe international community is at a critical juncture on Iran. World powers will have to…

Jafarzadeh also presented the book, IRAN: The Imperative to Reimpose UN Sanctions, at the event, as it has details of the regime’s malign actions, including terrorism.

The report read: “In a 2014 internal report exposed by the NCRI in September 2015, the IRGC [Revolutionary Guards] explained the Iranian regime’s Supreme Leader Ali Khamenei’s decision to enter into nuclear talks as a strategy of diversion, intended to direct the world’s attention solely onto the nuclear issue to the advantage of the IRGC’s regional aggression. Soon after the nuclear talks became serious in 2013, the P5+1 turned a blind eye when the criminal regime of Bashar Al Assad, with the IRGC’s backing, used chemical weapons to massacre the Syrian people.”

Khamenei believes that the IRGC is the last defence against regime overthrow, which can be seen through their entrenchment in other Middle Eastern countries and through his calls for further empowerment of the terrorist-designated group. This is why, under his orders, the IRGC has increased its terrorist activities, ballistic missile testing, illegal weapons purchases, and cyber attacks.

The NCRI report shows that the IRGC and the Iranian Army plan to resupply their armoury with modern weapons, like Russian T-90 tanks, to increase their military aggression across the region. This strife will cause conflict, which should worry not just neighbouring countries but the whole world.

In fact, the regime has even begun to prepare for the change in its military and political strategy away from defensive and towards a “target centric” approach. This many have even started back in 2015 with the signing of the nuclear deal.

.@RepMcClintock: The arms embargo against Iran's regime must be extended and snapback sanctions reinstated. #ExpelIranDiplomatTerrorists #FreeIran2020https://t.co/oHEE1OZeXb

On August 19, Ambassador Robert Joseph, former Under Secretary of State for Arms Control and International Security, said: “Failing to extend the embargo would be the end of any prospect for establishing multilateral sanctions in the future. Failure to lead and prevail on this issue would have negative consequences for the U.S. It could also have wider implications for the UN Security Council.”

The one-sided nuclear deal didn’t bring security for America, stability in the Middle East, or a change in the regime’s behavior – it never will. Re-establishing the @UN Arms Embargo on Iran puts pressure Iran to behave like a normal country and come back to the bargaining table. pic.twitter.com/6FRWZUAODj

Iranian Regime in Confusion Over Response to Fakhrizadeh’s Death