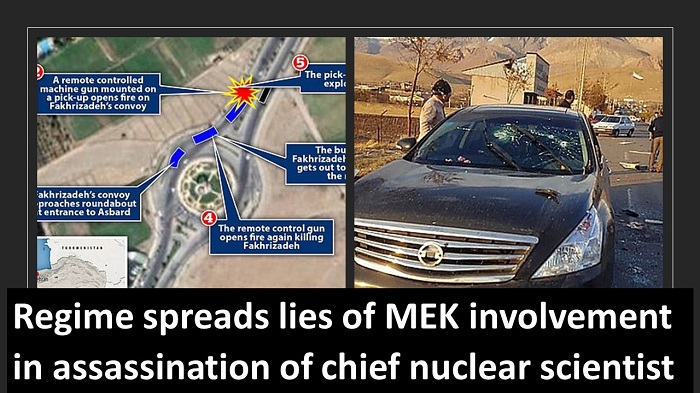 Iranian officials have had to deal with numerous issues over the last few months including COVID-19, over 178,100 people have died of the coronavirus in Iran, according to reports by the Iranian opposition the  People’s Mojahedin Organization of Iran (PMOI / MEK Iran), and the National Council of Resistance of Iran (NCRI).International isolation due to sanctions and now the untimely death of the nuclear scientist, Mohsen Fakhrizadeh, who appeared to be a key leader in Iran’s nuclear bomb-making projects. Fakhrizadeh’s death has been a bone of contention for the Iranian regime.

While many Iranian politicians and military officials seek revenge in the name of Fakhrizadeh in the violent tradition of the regime, Khamenei is also using the death of Fakhrizadeh to push support for Iran’s nuclear program. https://t.co/oKR4bWYMEt #MEK #Iran pic.twitter.com/8dUmeaaWUG

It was a member of the Armed Forces that confirmed the death of the scientist. There was no clear cut immediate response from intelligence and security agents. The response was so incoherent that the Supreme Leader Ali Khamenei’s spokesperson, Ali Akbar Raefipour, eventually criticized what had been broadcast on state-run television.

Even 24 hours after the incident, the Iranian people still had no idea there had been an exchange of fire or if there had been an explosion. TV Channel One had nothing but absolute nonsense to report.  Channel Two’s response was somehow far worse. The same applied to Channel Three, which has only posted subtitles on its videos and broadcasts.

Absolute mayhem appears in the state-run media reports and remarks from officials. For example, in the November 28th  edition, the Keyhan daily, which has a strong association with the Supreme Leader’s Office, asked for an immediate response from Israel. At this point, the Israeli government hadn’t confirmed or denied if it had been involved in the deadly operation.

The death of Fakhrizadeh, who the #MEK and #NCRI has said to be ‘the father of #Iran’s nuclear bomb-making projects,” has meant a quandary for the ruling theocratic regime and exposed deep tensions within it. pic.twitter.com/lZK11IhscH

On November 29th, Keyhan’s editorial chief, Hossein Shariatmadari, who without a doubt is an avid supporter of Khamenei’s opinions, went one step further and demanded a missile attack on Haifa port. His words can be found below:

“Really, we [should] attack the important coastal city of Haifa as strong as our attack, accompanied with severe human casualties in addition to the destruction of facilities, until we reach the assurance point of our deterrence power,”

In the meantime, Iran’s dailies, controlled by so-called moderate factions, we’re no longer being patient, silent, and restrained. They expressed their concerns over jeopardizing nuclear negotiations in the case of a missile response. Other media outlets also reiterated these positions due to their proximity to ‘moderates’ or ‘conservatives.’

#MEK and #NCRI reported many times that the mullahs will continue to push for nuclear weapons in #Iran, despite the JCPOA, as demonstrated by the Strategic Act to Lift Sanctions. Tougher sanctions need to be put in place against the regime.#WeStand4FreeIran pic.twitter.com/Ir5WWmUVsE

The National Council of Resistance of Iran (NCRI), and the  People’s Mojahedin Organization of Iran (PMOI / MEK Iran), and reported many times that the mullahs will continue to push for nuclear weapons in Iran, despite the JCPOA, as demonstrated by the Strategic Act to Lift Sanctions.
MEK Iran (follow them on Twitter and Facebook)