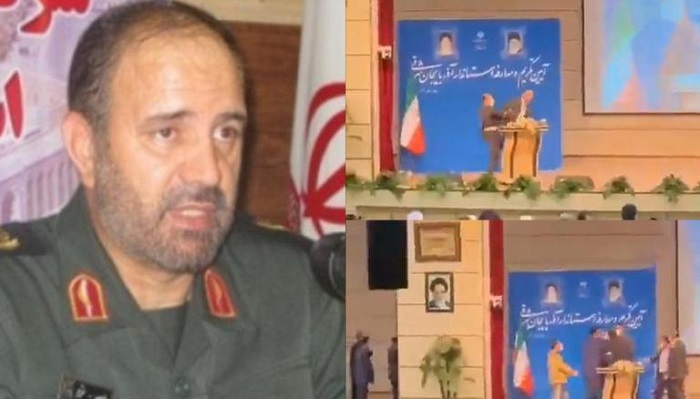 On Sunday, October 23, when Brig. Gen. Abedin Khorram, a former Revolutionary Guards (IRGC) commander, was about to begin his address as the new governor of Iran’s East Azerbaijan province, another guy came onto the stage, slapped him in the face.

The brawl between the assaulted and the assailant

The brawl between the assaulted and the assailant was quickly broken up by security and organizers, who escorted the latter from the stage. The event was recorded from beginning to conclusion, and it quickly made news in Iran and beyond.

This was not the first contact between the two, contrary to comments made by Abedin Khorram and reported by state media. The attacker was IRGC Lieutenant Colonel Jafar Alizadeh, a member of the IRGC Ashoura Corps, which Khorram oversaw, according to the official IRNA news agency. Alizadeh was in the Western Tabriz forces before Khorram’s term, according to the Telegram Group ‘Researching Teachers.’

However, the Brig. Gen. humiliated Alizadeh later by firing and demeaning him in front of his subordinates and then replacing him with a newly recruited Lieutenant. As per reports, the IRGC Lieutenant Colonel swore to react, and he did so, with the world watching.

Abedin Khorram has been a fervent follower of former President Mahmoud Ahmadinejad, according to the Baharnews Telegram group, which is administered by Ahmadinejad’s office. He was kidnapped and held captive by ISIS in Syria, and a ransom of $57 million was sought for his release. The Supreme National Security Council of the regime ruled against the swap, but Ahmadinejad personally intervened and offered to pay the ransom. When Iran’s foreign minister attempted to hand over the cheque to Qatar’s Emir, the latter refused to accept it, claiming that he had aided as a kind gesture.

Following the event, IRGC Lieutenant Colonel Jafar Alizadeh wrote an open letter, describing himself as a “humble IRGC Colonel” who is happy to have “rightfully slapped” governor Khorram’s “black hypocrite face.” He claimed he’s willing to be publicly tried to demonstrate the facts for why he considers Khorram a traitor while citing the Supreme Leader.

The slap has become a significant spectacle across Iran

The slap has become a significant spectacle across Iran’s entire political landscape. The IRGC issued a statement condemning it and siding with Abedin Khorram, asking the judiciary to deal with the aggressor and prevent such “unfortunate occurrences.”

“The level of public trust in the country’s officials and managers has drastically dropped over the last 15 years, and public anger has increased,” Alireza Sharifi Yazdi, sociologist, and university professor stated in a report from the state-run Aftab-e Yazd daily. In 2017 and 2019, this anger manifested itself in the form of violence and riots, as well as refusal to participate in elections and welcoming such occurrences, demonstrating public outrage.”

The aggressor called Khorram out for his corruption

While both former IRGC officials claim to be loyal to the supreme leader and accuse each other of hypocrisy — a term used by state officials to describe their arch-enemy, the People’s Mojahedin of Iran (PMOI / MEK Iran) — the aggressor publicly called Khorram out for his corruption and invited him to court. He had no fear of being prosecuted since he chose to publicly attack the governor, who has close ties to the administration. He was well aware of how he might exploit public indignation against the IRGC and the administration while avoiding harm.

The IRGC’s nerves and morale have been torn in recent years as a result of popular unrest. Sanctions have destroyed its ranks, and the state media is right to warn about the social implications. Iranians have had enough of the corrupt and authoritarian infrastructure that keeps the mullahs in power. The reality on Iran’s streets, combined with the interlinked political crises that the country is experiencing, has left the supreme leader with no choice but to eliminate many erstwhile colleagues who used to disagree on strategic decisions.