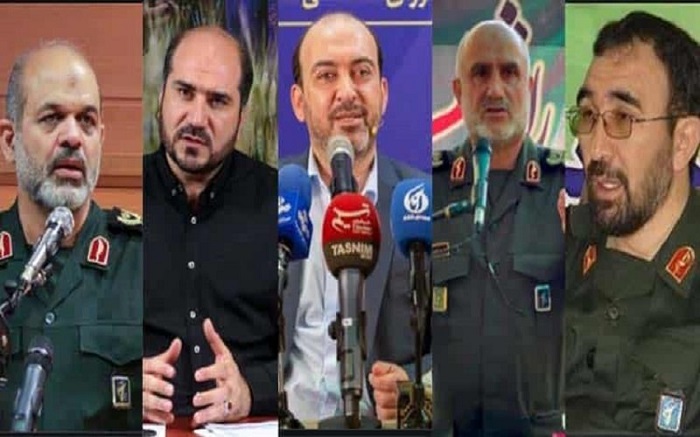 The National Council of Resistance of Iran (NCRI), and the People’s Mujahedin of Iran (PMOI / MEK Iran), reported that Yaghoub Ali Nazari, the governor of Khorasan Razavi, won a vote of confidence in the cabinet meeting on October 9, according to the Iranian state-run news agency ILNA.

The commander of the Imam Reza Base

Several other IRGC governors had been chosen before Nazari:

The Revolutionary Guards’ second naval zone was commanded by Ahmad Mohammadizadeh, the appointed governor of Bushehr province. He was also the Deputy Naval Coordinator for the IRGC. He also served in Mahmoud Ahmadinejad’s government as a senior oil consultant.

The state-run daily Mardom Salari newspaper, quoting a former Interior Ministry official, talked on the militarization of governorates through installing members of the IRGC:

“The election of a military officer to the most politically powerful government ministry demonstrates the military’s and security’s superiority in dealing with internal issues.”

The Ministry of Interior

Although Ahmad Vahidi has only been in power for a short period and many governors have yet to be chosen, these few selections illustrate what the government and its new interior minister are thinking and planning.

“The Ministry of Interior is the only ministry with serious responsibilities and missions in these areas,” Mardom Salari continued, “so the bold selection of military personnel for the body and subdivisions of the Ministry of Interior can raise concerns that policies in areas other than security and military concern are moving toward the security and disciplinary (police) field.

Finally, this publication acknowledged the regime’s fundamental concern and dread, which has resulted in the appointment of so many IRGC personnel to various government positions, writing:

“There is no doubting that the country’s position has deteriorated to the point where prospective grievances have devolved into actual protests. These assertions do not necessitate detailed logic or security data. Because the current state of affairs indicates that this is the case.

The recruitment of so many IRGC commanders to crucial political positions, as this state-run daily recognized while quoting an official, is a result of the regime’s foreseeing of a critical and perilous situation in the coming months.

People’s discontent has reached a point where soft and disciplinary (police) measures are no longer effective in managing the government. As a result, units of the Revolutionary Guards are placed in sensitive and vital regions to facilitate security control in crisis situations.