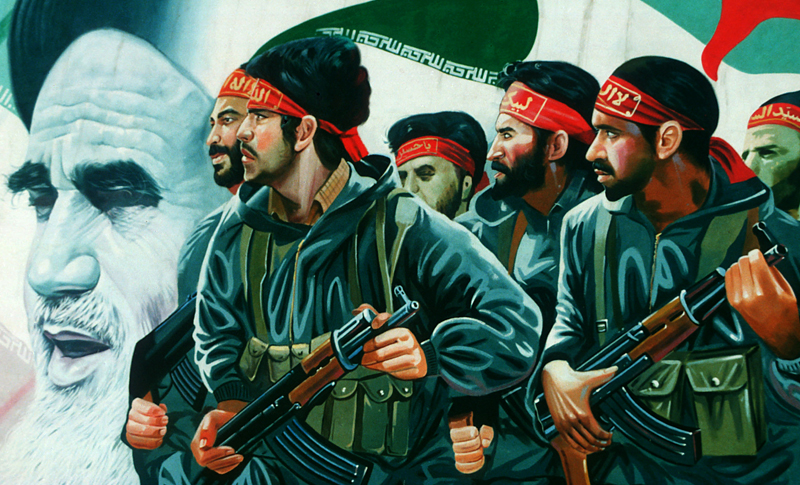 The Islamic Revolutionary Guard Corps (IRGC) is founded after the 1979 revolution on 22 April 1979 by Islamic Republic founder Ruhollah Khomeini.

The Iranian regime realized the need to have an advantage and apparatus to quell any domestic threats and unrest. Considering the fact that they could not trust the Iranian military, police and other state forces for this purpose, the ruling mullahs began the process of launching their own parallel forces.

In the hierarchy the IRGC is above Iran’s classic army and provided with enormous economic and political power. The IRGC developed its self as a “parallel” or shadow government of Iran, accountable to the supreme leader Ali Khamenei only.

From day one, the IRGC spearheaded a campaign aiming to purge dissidents, intellectuals, journalists, writers, opposition figures and organized labor unions. The principal target has consistently been Iran’s main opposition movement, the People’s Mojahedin Organization of Iran (PMOI/MEK), highlighted in a gruesome manner during the summer 1988 massacre of over 30,000 political prisoners, mostly members and supporters of the PMOI/MEK.

“The orders for the systematic execution of dissidents came from Khomeini himself in the form of a fatwa (religious edict). His intention was to purge the country of any opposition, notable the main dissident organization, the People’s Mojahedin of Iran (PMOI/MEK),” said Hamid Yazdan Panah, an Iranian human rights activist and lawyer, in an article published in The Hill.

Throughout the 1980s, the IRGC carried out numerous campaigns targeting dissidents abroad. These efforts included groups across the spectrum, including Kurdish and Baluchi groups, members of the Iranian opposition coalition National Council of Resistance of Iran (NCRI), among others.

Since 1979 revolution, the Iranian regime policies was based on export of terrorism and extremism abroad and domestic repression of the people.

This is the reason why the Iranian regime proclaims to have a divine mission of establishing a universally just government across the globe. It therefore considers meddling in other countries’ internal affairs as justified and necessary measures. As a result, the use of terrorism and spreading fundamentalist viewpoints are not policies of mere marginal importance. Alongside the brutal repression of all domestic protests, Tehran’s very survival fully depends on remaining loyal to this practice.

“Indeed, the bipartisan 9/11 commission report, which investigated the Sept. 11, 2001 al Qaeda terror attacks — the largest mass casualty terrorist attack in U.S. history — pointed out that there was ‘strong evidence that Iran facilitated the transit of al Qaeda members into and out of Afghanistan before 9/11, and that some of these were future 9/11 hijackers,’” The Washington Times reported on Thursday, September 8, 2016.

According to The Guardian report on Saturday October 8 2016, “this is aimed at fulfilling Tehran’s ultimate objective: overwhelming the entire region with chaos, and utilizing such a situation to expand their field of influence. Iran is “securing an arc of influence across Iraq and Syria that would end at the Mediterranean Sea”.

The IRGC can be described as the Iranian regime’s arm to establish the first “Islamic Caliphate” by taking first measures in this outline in 1979, long before Daesh (ISIS/ISIL).

In fact, the violence promoted by the Iranian regime across the region under the flag of Shiite Islam, parallel to the atrocious crackdown imposed on Sunni communities in various countries, have encouraged the rise of Daesh.

With Khamenei’s approval, the IRGC enjoys special and powerful dominance over the regime’s foreign policy and agenda. For example, the Guards have taken full control over Iran’s embassies in Afghanistan, Azerbaijan, Bahrain, Lebanon, Syria and Yemen. While having prominence in the affairs related to Armenia, Kuwait, Oman, Qatar, Russia, Saudi Arabia and the UAE.

In view of the significance to IRGC operations, the Iranian regime’s ambassadors and diplomatic missions to Afghanistan, Iraq and Syria are appointed directly by the IRGC and not the Foreign Ministry of Iran. It is worth noting that Iran’s current ambassador to Iraq, Brigadier Iraj Masjedi, was formerly in charge of the IRGC’s Iraq desk, as its chairman and a senior Quds Force advisor. The Quds Force is overseeing the Iranian regime’s operations in Syria and Iraq.

The IRGC quest to gain full control over Iran’s economy began following the Iran-Iraq war. This grip grew significantly during the presidency of Mahmoud Ahmadinejad, himself a former IRGC commander, from 2005 to 2013.

The IRGC has gained increasing influence in major sectors of Iran’s economy, such as oil and gas, and the construction industry. The exact number of IRGC-affiliated front companies remains unknown, simply due to the fact that they seek to evade sanctions through the use of various front companies and institutions in different countries.

Ironically, the IRGC benefited enormously from the 2015 Iran nuclear deal (JCPOA) the regime signed with the world powers.

Of nearly 110 agreements signed since the JCPOA’s signing, worth at least $80 billion, 90 counts of these deals have been with companies owned or controlled by Iranian state entities, according a Reuters analysis.

The IRGC is now considered a huge conglomerate of different companies and assets. Parts of its holdings include controlling Iran’s missile drive and the controversial nuclear program.

The IRGC owns and controls dozens of companies, involved in procuring the technology needed to develop ballistic missiles and sensitive nuclear products. The IRGC has been entrusted to develop and pursue the ballistic missile program and all its aspects. A senior Iranian official once boasted about Iran having a sixth missile production line, including the Shahab-3/3B, with a range of over 2,100 kilometers.

The Revolutionary Guards have roughly 125,000 military personnel including ground, aerospace and naval forces. It also controls the paramilitary Basij militia which has about 90,000 active personnel. Its media arm is Sepah News.

The Basij is a paramilitary terrorist militia force founded by the order of the Ayatollah Khomeini in November 1979 and soon became part of the Islamic Revolutionary Guard Corps (IRGC). The Basij receive their orders from, the Iranian Revolutionary Guards and current Supreme Leader Ayatollah Khamenei. Basij enforce state control over the people.

Basij serve as an force engaged in activities such as internal security, law enforcement auxiliary, providing social services, organizing public religious ceremonies, policing morals, and suppression of dissident gatherings. The force is named Basij; an individual member is called Basiji.
The Basij force was extremely present in crackdown of the protests of students in 1999. Basij force was also responsible for violent attacks on protesters during the 2009 uprising. Many people were injured or killed.

The elite Quds Force is a special operation unit of IRGC that handles activities abroad. The Quds Force is commanded by Major General Qasem Soleimani and is designated as a terrorist organization. The Quds Force backs non-state actors in many countries, including Lebanese Hezbollah, Hamas and Palestinian Islamic Jihad in the Gaza Strip and the West Bank, Yemeni Houthis, and Shia militias in Iraq, Syria, and Afghanistan.

Designation as a terrorist organization

On April 8, 2019 the U.S. President Donald Trump announced its Administration’s Plan to designate Iran’s Islamic Revolutionary Guard Corps (IRGC), including its Qods Force, as a Foreign Terrorist Organization (FTO) under Section 219 of the Immigration and Nationality Act.

Previously the U.S. Department of the Treasury designated the Quds Force under Executive Order 13224 for providing material support to US-designated terrorist organizations on 25 October 2007, prohibiting transactions between the group and U.S. citizens, and freezing any assets under U.S. jurisdiction. The designation also included leader Qassem Soleimani.