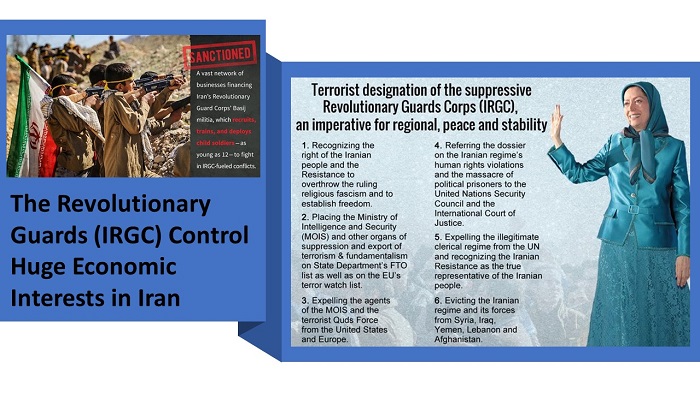 The Iranian Revolutionary Guards (IRGC) started to become involved in economic activities in 1989 which began with dam construction. Later it started to rent out machinery to companies working in the South Pars gas field.

In 2003, the Ministry of Defense and Armed Forces Logistics demanded that the armed forces work on construction projects as contractors in the more lucrative oil and gas industries. More and more of the economy was being taken over by the IGRC. Under the Fourth Economic Plan (2009) the IRGC took control over most of the country’s oil and gas. By the end of the Fifth Development Plan (2015), 25% of Iran’s economy, worth 110 to 120 billion dollars of the Iranian people’s wealth, was given to the cooperative sector controlled by the IGRC.

When Ali Khamenei selected Mahmoud Ahmadinejad as Iran’s president, the IRGC’s domination of the country’s oil and gas industry increased at a rapid rate. Ahmadinejad, without an auction taking place, gave a gift to his brothers, which was $1.3 billion worth of contracts for constructing a gas pipeline from Assaluyeh to Iranshahr in Sistan and Baluchestan. The contract’s value later became $2.2 billion after the pipeline was extended to the Pakistani border.

Examples of the IGRC control of oil and gas assets

#Iran’s petrochemical industry has been expropirated by Khamenei and IRGC, revenues used for suppression, export of terror, warmongering. Not one cent is used for people. Iran Resistance has called for sanctions on petrochems for long time.#FreeIran

The IRGC continues its domination of the country’s oil and gas assets unabated. In a 2018 report published by the Washington National Defense Research Institute, it estimated the number of auctions in which the IRGC took part after 1989 was around 7,500.

The IRGC Brigadier General Saeed Mohammad, the present commander of the Khatam al-Anbiya, said in October 2020: “35% of gasoline production, 20% of gas production, 22% of diesel production, 32% of oil and gas transmission lines and 50% of the country’s dams are in possession of the IRGC’s Khatam al-Anbiya Construction Headquarters.”

The revenues of the regime’s petrochemical industries end up in Khamenei’s headquarters through a series of double-dealings and duplicities like fake tenders.#Iran

Part of the IRGC’s domination of significant amounts of Iran’s oil and gas industry has meant the IGRC alone is responsible for draining Iran’s economy is not just the oil and gas sectors but all other sectors too.

Mrs. Maryam Rajavi, the President-elect of the National Council of Resistance of Iran (NCRI), released a statement after the designation of the IRGC as a Foreign Terrorist Organization by the United States.

Mrs. Maryam Rajavi pointed out that the NCRI and the Iranian Resistance has called for years to have the suppressive Revolutionary Guards designated as an FTO. The People’s Mojahedin Organization of Iran (PMOI / MEK Iran), has advocated for the inclusion of the IRGC on the FTO list for many years.