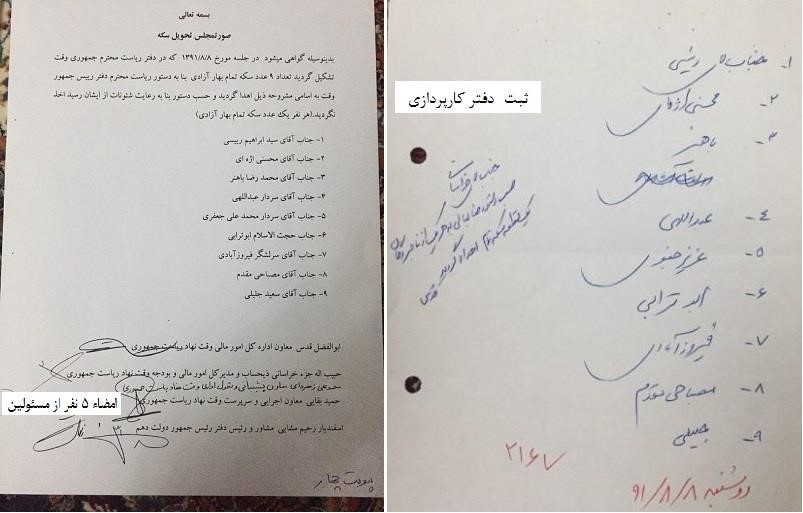 The situation of the country is very dangerous… Unfortunately, the current
state of the country has minimized the hope of realizing a better future,
through existing mechanisms
From Mahmoud Ahmadinejad’s Letter to Khamenei
November 2017

The recent letter by the former Iranian President Mahmoud Ahmadinejad to supreme leader Ali Khamenei reflects the fractured and fragile state of the ruling theocracy.
Current and former senior and lower-level officials spoke publically about the letter.

Here are some excerpts from his letter: “The situation of the country is very dangerous…
Unfortunately, the current state of the country has minimized the hope of realizing a better future, through existing mechanisms…” He points to the failure of previous plans and a deadlock in the regime’s grip, adding that “public confidence in the honesty and ability of some senior executives … has long crossed the red lines…”
In another part of his letter, Ahmadinejad wrote, “Hundreds of thousands of people have been affected by the central bank management and the functioning of financial and credit institutions authorized by the official centers of the country … Dissatisfied with government officials, they have staged sit-ins for more than thirty days against the judiciary.”

“Workers who are suffering from hardship and poverty, have been denied monthly payment of their minimum monthly salary, have been persecuted, beaten and arrested. Is there any worse behaviour imaginable?” he added.

In another part of his letter, Ahmadinejad specifically attacked the Larijani brothers; Ali and Sadeq, who are respectively in charge of legislative and judiciary branches of the regime: “A small group and several specific families are trying to monopolise the strength and the positions derived from the nation’s revolution, to their own benefit and strengthen the sovereignty of the factions and the gangs of wealth and power..”.

These are just a few problems which Ahmadinejad, who as a two-term president, who currently sits on regime’s Expediency Council, mentions in his letter to the supreme leader.
The publication of this letter triggered a round of attacks and counter attacks which sheds light on fact that this regime in is its totality run by a gang of thugs who are only worried about themselves and their associates, and the supreme leader.

In a press briefing, the Judiciary Spokesman Gholam-Hossein Mohseni Ejei said :
“Some people are used to lying openly and they are bad mouthed, and consider themselves above the rest, and one cannot comment on them.
“Baseless speeches by Ahmadinejad common knowledge.This guy says he’s used to speaking the same way (with lies and exaggeration).”

It is interesting to know that Ejei was appointed as the Minister of Intelligence by Ahmadinejad when he was president in 2005 and held the post for four years.
Following Ejei’s remarks and similar comments by Mohammad Ja’fari Montazeri, the regime’s Attorney General,
Ali Akbar Javanfekr a member of Ahmadinejad’s cabinet, in a letter addressed to both of them warned them about the consequences of their abusive and offensive comments against his former boss:

“Both of you should correct yourselves immediately, otherwise it will not be long before the regime and the nation will make you regret adopting such positions.”

He also wrote: “These allegations and insults can only be made by the judicial authorities enjoying immunity for the obvious abuse of their position, because if any official or citizen uses such scandalous language, he will immediately be dealt with severely and sent to the notorious Evin prison. ” Subsequently, Mostafa Tajzadeh, Mohammad Khatami’s Acting Interior Minister, jumped on the bandwagon and attacked Ahmadinejad for his policies during his presidency.

In doing so he first admits the regime’s mistake in continuation of the war with Iraq and says :
“Even our mistake in continuing the war following the liberation of Khorramshahr did not give the United States such an opportunity to impose global sanctions against Iran but Ahmadinejad singlehandedly made this possible for them and they imposed numerous resolutions against us. It is interesting to note that even at that time, the Russians were warning us about preventing our file from being sent to the UN Security Council otherwise they cannot do much to help. Unfortunately, that advice fell on deaf ears. …”

Hamid Baghaei, Ahmadinejad’s Executive Vice President from 2011 to 2013, who has been in headlines these days and is under investigation by the Judiciary for corruption, disclosed the information about bribing some top officials by giving them gold coins.

Referring to those meetings Baghaei said : “The meetings were attended by senior commanders of the IRGC, the judiciary and the legislature. For example, in one or two of these sessions at the request of the guests they were given gifts…”

“One occasion was on the night of the Eid of Ghadir, (an important Shia religious occasion), when they asked Mr Ahmadinejad to give them some gifts becaue they were coming to these meetings after hours. Given that were coming at night and worked without any pay for a long period of time, they were given a gift. I think they were each given four or five gold coins.”

Following Baghaei’s disclosure, Gholamreza Mesbahi Moghaddam a former parliamentarian, and Ebrahim Raisi, who was Khamenei’s preferred candidate in recent presidential election and deputy for the Judiciary at the time, both denied receiving gold coins.

In an interview with the state run news website “Khabar Online” Mesbahi Moghadam said : “I reject Mr. Baqhaei’s claim that Mr Ahmadinejad has given us five batches of Bahar-e-Azadi coins during the meetings held to study the causes of economic tensions, and this is a lie.”
Then there was the publication of a document dated October 29, 2012, with names of nine top officials who had apparently received the gold coins.

Some like Mohsen Rafighdoost, former commander of the IRGC, said in an interview with the official News Agency ILNA : “… I did not agree with Ahmadinejad from the onset, he is not balanced.”
He went on to add: “Ahmadinejad’s greatest characteristic is that he is not a believer in (Velayat-eFaqih) He is doing he is after making a name for himself. God willing, his time will be coming soon and the judiciary is completing his case.”

Esfandiar Rahim Mashaei, Ahmadinejad’s an advisor and chief of staff who is also being investigated and has been summoned by the Judiciary, attacked the Head of Judiciary : “There are no secrets between us and the people. One of the current problems is that the judiciary acts in favor of the establishment by relying on establishment, which is contrary to the spirit of the constitution. Because of your past performance, we are ashamed of many people now. They are now criticizing us and saying that we have only raised our voice for ourselves. They are right!
We thought you were sitting in a position of justice! We have just understood what your views and beliefs are and how you look at things.”

In another part of his remarks he said:
“If we criticize your positions and actions as well as your performance, you hide behind the Islamic Republic of Iran? Is this not treason and great cruelty?! We are looking to blow your cover and expose your true colors!”

Members of Ahmadinejad’s camp cited Khamenei’s remarks in praise of Ahmadinejad to counter their critics. Khamenei had said, “
“What I have to say to friends today is, first of all, God Almighty. You worked for eight years, tried… to do good work, showed the endurance, you worked day and night; it was seen, felt, everyone realized that the distinguished President and his colleagues in the government worked hard and fast in comparison to all previous presidential terms, This fact should not be ignored.

For those who want to judge the governments, the cabinets and the presidents, for themselves or for the public it’s good to pay attention to all that wants to judge about the governments, about the cabinets, and about the presidents – both before themselves, in the public view and opinion to take into consideration the high volume of work, tireless efforts,…and another notable thing about this government during the past 8 years and I have mentioned it numerous times was to

“Another point that I was referring to about this government over the course of these eight years, and I have repeatedly referred to it, is that this government was able to overcome and honor the slogans of the revolution and bring them to the community. . One of the important things that the counterrevolutionary front – whether our revolution or other revolutions – had and did throughout history and throughout the world, has been to try to diminish the values of the revolution.

“Imam’s last speech is the will of Imam. I have always advised those who have held high office in various governments to address the will of Imam. The will of Imam, was the essence of the values of the Imam, and he left them. So these values are not distorted, cannot be changed. Yes, not seeing these is something that is possible for those who want to not see.

This government introduced these slogans; it highlighted them, raised them proudly on the global scene, it did not feel shameful of revolutionary motives, revolutionary goals, and revolutionary methods; it did a great job.”

As one can see this infighting has no end to it and what is very interesting that both sides claim to have the interests of the regime and its supreme leader in mind. This is also an indication that the Supreme Leader can no longer silence either faction.